Overall, I’m happy with my 2018 year in running. I did a few new races and a few old favorites.

Had a few pacing gigs, and returned to the ultramarathon. 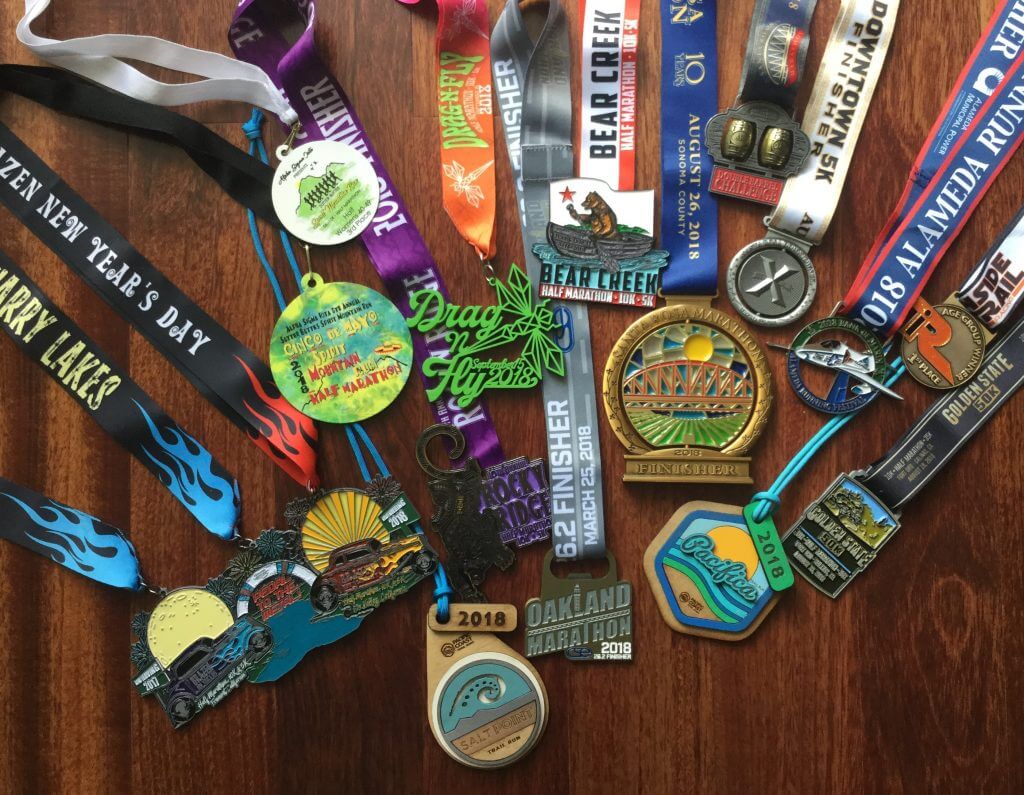 In basically chronological order, here are my favorite, or at least most memorable, running-related experiences of the year. 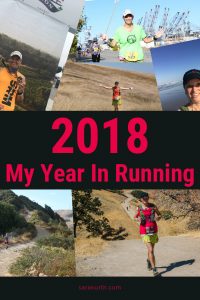 My favorite trail running race organizers (Brazen) do what they call a 2-year marathon – half marathons on New Year’s Eve (or the Saturday nearest that date), and on New Year’s Day. When NYE is on the weekend, the races are back-to-back. If you do both races you can say it took you two years to run a marathon.

The wrinkle? My running club was doing a 14-mile training run on Saturday. Usually, I would have skipped it given my upcoming races, but it was a course in San Francisco, running from the Ferry Building to the Golden Gate Bridge – one of my favorite courses of the year. I couldn’t bring myself to skip it. 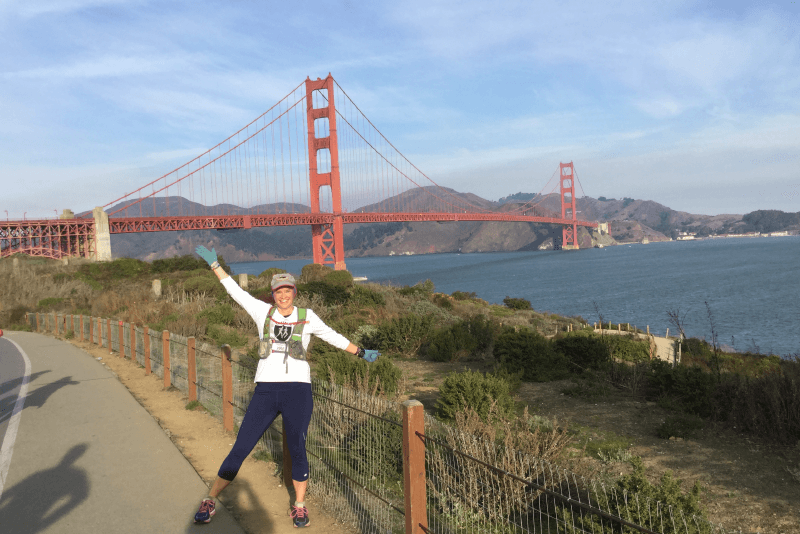 What’s a girl to do?

Do all three and make it a 3-day, 2-year ultra running extravaganza, that’s what.

Added bonus: These are the races that prompted me to start my YouTube channel since I started filming a few bits while I was standing around bored waiting for the race to start. 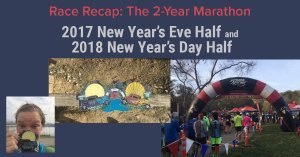 With less than a month to go before race day, the Oakland Marathon drastically changed the course.

It went from a hilly but beautiful tour of all Oakland has to offer to a flat, boring, and desolate loop of industrial and warehouse districts.

I hated these changes, and hated the way the race handled them. There had been no indication changes were in the works. So less than a month before race day (literally the day before we were scheduled to do a 20 mile long run on the (now former) course), after we’d been training for nearly 4 months, they changed 90% of the course.

But these changes were made so late in the day that I’d already committed to pace the 5:00 marathon group. So run it I did.

In the end, as expected, it was a pretty desolate and spectator-free race. They also had poor food management at the finish. By the time I was done, there was basically no food left. I ran a marathon and got a banana and granola bar, then had to walk by tables that had held chips, yogurt, bagels, oranges and a few other things that had been filled to the brim earlier in the day, but were now empty.

All that said, I ran as a pace group leader, with many of my runners from my training group running with me, and we had a pretty good time amusing ourselves on what otherwise would have been a really boring course.

And from the view of setting and achieving goals, the race was a complete success. I was the 5-hour pacer and I finished in 4:59.53. 7 seconds off? Not too shabby, especially considering the mile markers were in the wrong places on the course. 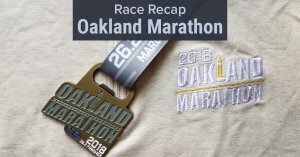 I’d never before been to Sutter, California (about 2 hours Northwest of the Bay Area). I’d never heard of this race – the Sutter Buttes Half Marathon, but I’d gotten a last-minute invite to pace the 2:30 group.

Why not? I figured. I’m trying to take advantage of the opportunities that present themselves.

This was a super small race, I’m surprised it had pacers at all. It was a basic out and back course that had more elevation gain than you expect. We ran right by the Buttes State Park, which I’d never seen (or heard of) before.

I made a day of it. The race was part of a larger town festival. There was a parade and cardboard boat races to celebrate the opening of the local pool.

While this wasn’t the largest or the most amazing race ever, I had a really great time. A good reminder that a little more spontaneity in my life can be a good thing.

Oh yeah, did I mention the Zonkey? 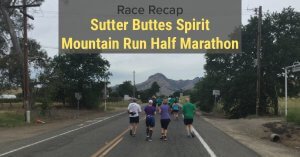 I didn’t know what to expect from the Golden State 35k. This was the first year the race company put on this particular race, and I’d never been to this area – Fort Ord, near Monterey.

It had been a long time since I’d done a trail race in an entirely new area. Lately, I’ve mostly done races that I’ve either done before or where I at least knew the general area.

The course was beautiful and had a little bit of everything – including dramatic early fog that burnt off as we ran. 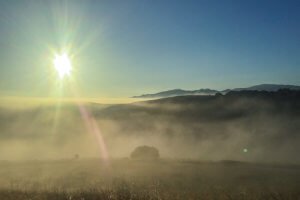 It also had the added oddness of feeling like I was in the middle of nowhere, but then hearing the racecars on the adjacent Laguna Seca Speedway roaring by.

I even won my age group! That isn’t saying a whole lot since there were only 16 finishers in the entire race, but a win is a win. 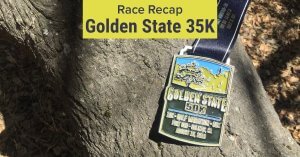 Another back-to-back race event, but these two were not related. It was a coincidence I did them both.

Saturday’s race was Drag-n-Fly. For my money, one of the hardest trail half marathons around. It climbs nearly 3000 feet, and is largely exposed. In past years it’s been ungodly hot, but to my surprise, it was downright temperate this year.

Sunday was another last-minute pacer invite – to pace the Alameda Running Festival’s half marathon. This is the flattest and fastest half marathon you can imagine. I usually don’t have too much trouble holding myself at my correct pace when I’m a pacer, but this one was a challenge. This course is just so fast.

Doing these two races back to back was an interesting running dichotomy. The hardest, hilliest trail half right next to the flattest and fastest.

Every difference in running I could experience over the course of two days. 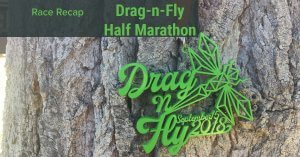 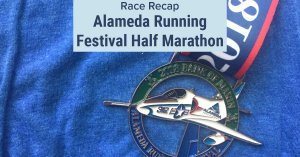 My ‘A’ race of the year and my second ultra.

I knew this race started on the beach. What I didn’t realize was that the first 6 miles were run on the sand (I’d reviewed the map, but I figured we’d move to a trail that parallels the beach, but no).

The weather was perfect for racing, the sky was clear, the views were stunning.

What more could you ask for in a race? 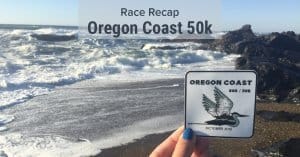 After Oregon Coast, I entered my running off-season and went on a race volunteering binge. I had a volunteer shift on the calendar every weekend from mid-October through Thanksgiving.

But Mother Nature had other ideas.

In early November, the Camp Fire started in Northern California and blanketed the Bay Area with smoke. One Saturday, I had been scheduled to volunteer at a race near Mt. Tam in the Marin Headlands. I woke up at 4, drove an hour, helped unload all of the trucks and set everything up, and started checking runners in.

Only to have the park service cancel the race due to smoke less than an hour before the race was to start.

I’d been scheduled to be a course marshal near the Golden Gate Bridge for the North Face Endurance Challenge the next weekend. That race was canceled as well.

As you’d expect, runners were disappointed in the cancellations, but they were also almost all gracious and understanding, keeping it all in perspective. Knowing one lost day of racing pales in comparison to what others have lost.

My Running Year In Numbers

1,370 miles (and about 60 miles more on the calendar before the end of the year)

222 of those were racing miles.

I don’t actually keep track of this, but I tend to take a GU pack about every 8-9 miles, and a GU chew about every 6ish miles (and there are 8 blocks per pack). So approximately: