I can’t say why I wanted to do video – I don’t like watching or listening to myself on camera, but it was an idea I couldn’t get out of my head.

Most of 2018 was spent getting over hating seeing myself on camera and getting the hang of editing videos. I still may not be amazing at either, but I’ve continually: 1) enjoyed it and 2) gotten better.

Even after a year, I’m not sure what my goals are with my channel. It’s still just something I’m doing because it’s fun and as long as I’m enjoying myself, and I’m improving, I’ll stick with it. 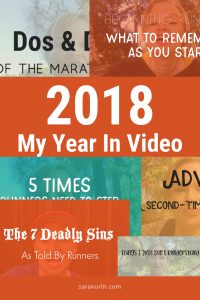 The video that launched it all.

I filmed a few little clips at my 2017 New Year’s Eve Half Marathon while I was standing around bored waiting for the race to start. My idea was just to practice filming something. To see just how bad I was on camera to have footage to play around with as I learned about editing.

As I looked back at the film, my thought was: this isn’t too terrible.

This is the highest praise I’ll give myself when it comes to video.

6 Thing Runners Should Do

When I had the idea to launch a YouTube channel, I wasn’t sure what to put on it. I didn’t like the idea of doing basic talking head videos or a vlog, but the idea of creating entirely new content for video was daunting.

While doing upkeep on old blog posts (yeah proofreading!) I noticed just how many of my posts are lists. Aha! Flash of inspiration! I could film these little segments separately and put them together!

The idea of filming on the run was born.

This ‘6 Things‘ post was the first video I put together and posted.

The 7 Deadly Sins As Told By Runners

This was kind of an odd blog post (what can I say, I go where my mind takes me) and it’s an equally odd video. I feel like it played up my goofier side, and it benefited from my becoming more comfortable in front of the camera.

My blog-post based videos average between 4-7 little segments plus an intro.

It took me over a month to film (I really do film the segments on the run, so there is a limit to how many I can do in a week) and forever to edit.

My Most Popular Videos

6 Things Runners Should Never Do

The only video on both lists!

This is one of my consistently top viewed blog posts, so it isn’t a surprise that the related video has done well too.

This one was a surprise to me.

I’d gotten the Nathan vest from REI to review and decided to also do a video on it (the gist of my review: it was fine). I suppose this video gets a boost from people specifically googling the product.

Running Lessons It Only Took 20 Years For Me To Learn

That this one made the list is also a total surprise to me.

Unlike my ‘Never Do’ and ‘Long Run Mistakes’ posts, this isn’t one of my top 10 blog posts, so I can’t figure out why it’s being watched more often.

8 Phases Of Running A Marathon

I liked the whole ‘Phases of The Marathon’ series I did earlier this year and I’m glad this video has done well.

I’m actually surprised I haven’t gotten more comments from people pushing back or disagreeing with how I mentally divide of the marathon.