To run is to pray

I need to be more careful with what random ideas I put out into the universe.

A few weeks ago, I was talking to someone in my running club about the Running in the Midpack book I’d just finished. After we talked about various running books for a bit, one of us said – we should start a running book club!

My first reaction (as an introvert and non-joiner of things) was absolutely not. But I also couldn’t get the idea out of my head, so next thing I know we are making plans to kick it off. If nothing else, it will give me an excuse to finally read all the running books I have on my bookshelves.

While reviewing my various streaming service queues, I also noticed I have a bunch of running documentaries I want to watch and (similarly) never get around to.

So the current plan is for the ‘book’ club to also discuss running documentaries.

With this in mind, I’ve started watching some of those documentaries, so I have an idea of what to suggest for the club

One documentary that was high on my ‘to watch list’ was 3100: Run and Become.

When it was released in 2018, interviews with director Sanjay Rawal kept appearing on various running podcasts I listen to. Every time I saw the subject of the interview and the summary of the doc (more on this in a second), I’d tell myself I have no interest in it, I didn’t care, and I’d skip past it.

Eventually, the interview would come up in my podcast queue anyway. Every single time, I’d come away super impressed with the director and super interested in the doc.

Even so, it took me years to finally get around to watching it.

3100: Run and Become is currently streaming on Amazon Prime Video

Oh yeah, did I mention the course is a single square block in Queens, New York?

One concrete covered block (about a 1/2 mile loop).

I resisted watching this doc for as long as I did because I figured there is no way to make that visually compelling. It’s a huge physical and mental accomplishment sure, but not exactly cinematic.

I was also confused about why the trailer features a man running through vast western vistas. I’ve never been to Queens, but I’m pretty sure they don’t have mesas and wide open spaces.

What I didn’t realize is director Rawal weaves in stories of other cultures who use running to connect with something greater than themselves:

I was particularly intrigued by the Kaihogyo, but the doc only gives the briefest of overviews of it, so I did some additional reading. The tradition is to run 30k a day (18ish miles) for the first 100 days. All done in addition to other temple duties and stopping at shrines for prayers.

At the 100 day mark he can quit the endeavor, but once he starts the 101st day, his options are to finish it or commit suicide.

The man talking in the doc about the suicide DNF requirement gives the understatement of the century, “the requirement to commit suicide is our most strict rule.”

The result is a compelling take on running.

It’s more than just a form of exercise or way to prepare for a race.

Running is (or at least can be) a spiritual and meditative practice. It can connect us to the past and to tradition.

While the 3100 mile race is founded on (as far as I can tell) the teachings of Indian spiritual leader Sri Chinmoy, the inclusion of the other stories makes clear that running as an activity is universal and using running as something more than a way to get from point A to B is similarly universal.

Sort of spoiler alert: It’s pretty clear from the start what will happen, but if you don’t want to know some specific content, skip to the next section.

My biggest complaint with this documentary is the inclusion of the San tribesman.

They are fighting to maintain their traditional (running-based) hunting methods, which were banned by the government. In the end, they do a hunt anyway.

While I’d usually support the continuation of traditional ways of life, in this case it means they are poaching in an animal wildlife preserve. It left me feeling very conflicted, and it raised many big questions that are far outside the scope of this documentary and have nothing to do with running.

The rest of the stories in 3100 are about people who use running as a form of prayer or as a connection to something bigger than themselves. For this tribe, running is part of their history and their traditions, but it isn’t part of their spirituality in the same way.

Do You Need To Be a Runner To Get It?

3100: Run and Become doesn’t go into much detail about the logistics of this race or the physical or mental training required to participate.

I think the experience of getting so focused on an activity you get lost in it is universal and is relatable enough, even if your chosen activity isn’t running.

Although I don’t know if non-runners will fully understand how much of a mental challenge ultra races can be. The physical challenges are obvious, but so many of the challenges after 20, 50 or (I assume) 1000 miles are mental.

As an ultra runner, I could draw on firsthand experience to understand what one runner meant when he said, “You feel pain, you feel suffering, then forget about all of that.”

I’m not sure non-runners would feel that statement in the pit of their stomachs in the same way.

Would I Do This Race?

Assuming I physically could run 3100 miles in 50 days (which is a huge assumption), Hell no!

I don’t like courses that are multiple loops. Two loops is more than I like doing. Doing 3100 miles a 1/2 mile loop at a time!? Not a chance!

Add in all that concrete, people dodging on the sidewalk, summer heat, humidity, and rain!?

It’s everything I hate in running all in one!

My first reaction is I wouldn’t even do a 5k version of the event, but for a distance runner like myself, doing it as a 5k probably would be harder than doing a marathon version.

A common theme in my marathon race recaps is it often takes me 5-10 miles to get into a groove. For me, a 5k version of this race would be 100% suffering. At a marathon distance, at some point, I’d fall into some sort of rhythm and it would feel easier.

Running longer, in some ways, is easier than running short.

3100: Run and Become is currently streaming on Amazon Prime Video 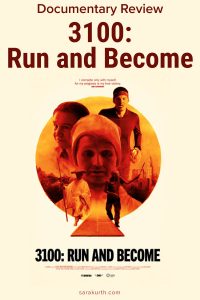 Note: Images used were taken from the documentary website