I love trail running – there are so many beautiful sights that you can only discover on your own two feet. But hitting the trail for the first time may be a bit of a surprise for runners who have only run on the road. 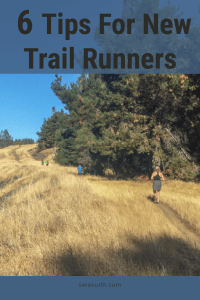 If you expect your first trail run to be just like a road run, but with a bit more dust, think again.

Trail running can be an entirely different monster.

There Is No Single Definition of Trail

‘Trail Running’ can mean very different things depending on what trail you are on.

A 5-mile trail run can be 5 miles on a relatively flat, crushed gravel trail, or it can mean 5 miles on a rocky, single-track trail with 1000+ ft elevation gain.

They may be the same distance, and they may both be on ‘trails,’ but they are two very different experiences.

Have an idea of what you are in for before you start – check out trail maps and elevation charts before you head out.

While you can head out the door for a run of any distance in your neighborhood without much of a plan, that same approach isn’t a great idea for the trails.

You can easily get lost.

And there are also fewer people around if you need help or directions. While fewer people is one thing I love about trail running, it is also what can make it a little more dangerous.

Know where you are going before you start. Carry a map (an honest to gosh paper map) since GPS and cell service can be unreliable on trails (again, even on trails in urban areas).

Run with others, or let someone know where you will be and when you should be back. 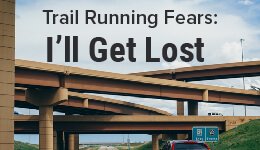 Train by Time, Not Distance

Elevation, footing, and ground cover will all impact how long you’ll be out on the trail. Chances are you will be (much) slower on the trail, while you will work (much) harder.

Judge your training based on the time you are out on the trail and the perceived exertion of your run, not the miles you cover.

I always can pick out the newbie trail runners at the start of a crazy hilly trail race. They are the ones talking with their friends about what their race pace is going to be.

The conversation usually goes something like this: “I usually run 8:45 minute per mile on the treadmill, so that will probably be my race pace here.” They’ve clearly never run on a trail and have no idea what climbing 2000+ feet in the middle of a half marathon will do to your time.

For example, my average half marathon time for a road race is around two hours, a hilly trail half marathon (with around 2000 feet of climbing) on single track trails averages around three hours – and I’ll feel like I’ve worked equally hard at both.

Throw Pace Out The Window

Related to the above: throw the idea of running at a consistent pace out the window.

Your paces will vary wildly on the trail. Heading uphill or running on super-technical trails will mean times well slower than what you are used to if you’ve only run on the road.

But your pace on the downhill sections may be faster than you’re used to.

On the trail, your pace can be a hard thing rely on.

Walk When You Have To

If your course is super technical, walk (or at least slow down) to ensure you don’t twist an ankle.

Power walk the uphills. There is little to be gained by running a long uphill. The tiny bit of speed won’t make up for the extra energy you’ll expend ‘running’ up the hill.

When on the trail, I pass the most people on the uphills – when they are ‘running’ and I am doing my uphill power walk.

I knew I’d found my sport when I once found myself running with trail runners who were all way faster than I was. We hit an uphill, and they all started to power walk too.

These are my people!

What I love most about road running is the ability to zone out and use a run as a moving meditation. Or to catch up on my podcasts and ignore the real world for a bit.

This will not work on the trail.

Pay attention to your surroundings so you don’t get lost.

And not to mention  – you don’t want to miss any of the amazing views.

Is there anything you wish you’d known before you first ran on the trail? 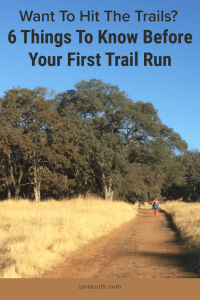 One thought on “6 Tips For New Trail Runners ”