Awhile back, I was pacing at a race (remember those? You’d get together and run with other people at the same time! What a concept!) and got talking to one of my runners who was the mom of two kids.

She was just getting back into running and had gotten several running-themed books to read to her kids at night.

The two she (and her kids) specifically enjoyed were Marathon Mouse and Pellie Runs A Marathon (side note: this was the same conversation that eventually got us talking about Mike Mulligan).

Remembering this conversation got me thinking about kid’s books about running, marathons, and track and field.

Preston and his mouse family live under a bridge in New York City. He dreams of running the New York City Marathon, even though his family doesn’t always support his marathon running dreams.

Hank the sloth and his moth friend Dee train for the Great Rainforest Race.

Who knew there was a whole subgenre of running sloth books?

Sam challenges his rainforest friends to race, learning about comparison and embracing what makes you unique along the way.

Running Is Totally For Me

Madi tries out several sports until she discovers running is totally for her.

Wilma Unlimited is the true story of Olympian Wilma Rudolph, who overcame polio and a paralyzed leg to win several Olympic medals.

No kid’s book list would be complete without the Berenstain Bears (or is it Berenstein? Darn that Mandela Effect!)

The Wildest Race Ever: The Story of the 1904 Olympic Marathon

I don’t know how interested kids would be in this story, but the true story of the 1904 Olympic Marathon in St. Louis is totally bonkers.

Dust, nap breaks, and consuming strychnine (instead of water) is just the start of it.

If you don’t know the story, read up on it.

Forget the kids – I think I need this book.

How much sooner will I cross the finish line if I’m running 10 seconds faster a mile than my friend in a 5k?

The Little Engine That Could

The Little Engine That Could was one of my favorite books as a kid.

It wasn’t until I recently stumbled upon this book again that I realized it taught me everything I needed to know about training for a marathon. 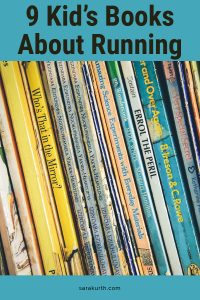