This week was remarkably unremarkable – I did my runs, felt pretty good, and had only one negative mental spiral. 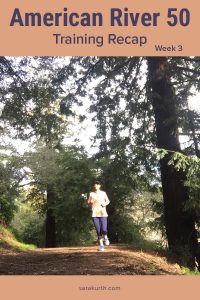 Fueling – research how I should supplement my existing fueling for 50 miles.

The plan had me doing yoga today. I didn’t.

I have no reason for not doing it, or even good excuses – I just didn’t feel like it.

But I did foam roll tonight, so I wasn’t a total slug.

Tangentially related to running was my great frustration for the day – there are few things I love more after a long run than a cold can of coke. I was excited Target has coke on sale this week so I was going to treat myself and stock up. At Target, the cash register didn’t reflect the sale price. I thought maybe they’d have a ‘if it doesn’t scan you get an extra discount’ deal.

Come to find out that in Alameda County, we passed a soda tax. Part of that law is soda can’t be sold at a discount within the county.

I was unreasonably upset by this. I have so few vices – let me buy a case of coke at a discount.

I don't have much to say about today's run- I felt good, the weather was good, the sun was shining. It was the kind of run that is great to have, but that doesn't make for terribly compelling instagram captions

I’m trying to switch up my running routes a little so I combined my go-to 4-mile route with my go-to 6-mile route for new frankensteined 6-mile route.

I still need to perfect it though- I wasn’t sure where to turn around so my run ended up at 6.5 miles.

My streak of actually doing my strength work continues. I’m tempted to add a few more moves into the mix, but I’m afraid if I add things in, I’ll be less likely to do it at all. I think one reason I’ve been successful with it so far is that my routines are fairly short. If I add in a few moves, it will take longer and I’ll be more likely to make excuses why I can’t do it at all.

Im trying to switch up my running routes, so instead of my usual go-to 8 mile route, i went in the opposite direction- running over to Lake Temescal and doing a few laps (the 'lake' is really more of a glorified pond) before heading home.

My go-to 8-mile route heads from my house to Jack London Square, but I know I’ll get into a running rut if I only do my go-to routes.

So this morning I went in the exact opposite direction and ran to Lake Temescal, which is about 3 miles away. The lake is small (about 1.5 miles around), and has two different paths around it, one near the lake (and flat) and one a bit farther out (and hilly), so I decided to two do both loops before heading home.

The skies have cleared, so for this week at least, the night trail runs are back on. Since many dirt trails are still muddy, we did the paved trail at Inspiration Point. Nice night for it, but much of the trail is on a ridge that was super windy.

My cheeks were frozen by the end of it.

All runners and all paces are welcome to run with this group, but I suppose people willing to do night trail runs are a self-selecting group – even at a 9 min/mile pace (fast for me, especially on the second half of two-a-day run), I was the runner lagging behind.

I’m ok with that (but it was hard not to notice).

#seenonmyrun Yep. Their logic checks out.

I usually do my runs first thing in the morning. But today, I had a few things I wanted to get done right away, so I didn’t get out the door until around 10.

I felt so much more energetic running a bit later in the morning!

Maybe today was just a fluke, but I think I should review my morning routine and try experimenting with running at different times of day.

After the run, I did my strength routine (mostly).

My strength routine is made of moves that I cycle through 3 times. I was multi-tasking during my strength work today (heating up lunch). I did the first two cycles through just fine – focusing on the workout. The third time through I kind of half-assed it while I made sure my lunch didn’t burn.

I’ll count it as a complete strength workout, but it isn’t a habit that I should get into.

I do love my rest days.

However, since I skipped yoga on Monday, I made up for it today, doing the NTC workout Yoga Ready. It’s a short little yoga workout, but it’s something.

I felt like having the discipline to do something after bailing on Monday was more important than having the intention of doing some long, drawn-out hour-and-a-half yoga extravaganza that I never got around to.

A 15 mile long run with the run club (as a coach and pacer of the 11 min/mile group) followed by another 6 miles on my own- cuz thats how i roll. Gotta get those ultra training miles in somehow. #lmjs #lmjsspringtraining

The group run with the club this morning was 15 miles, so I did those miles in my role as coach and pacer. The course was around Alameda, the one area of the world where my usually great sense of direction consistently fails me. I’m not sure what it is about this island that always gets me so turned around (I didn’t get lost on the run, but I took a wrong turn on my drive over).

15 miles didn’t feel like enough, so I did another loop of the Island. I didn’t know exactly how long that loop would be, but it felt like the right option. The extra mileage was exactly 6, leaving me with a total of 21 miles for the day.

I felt surprisingly good for the entire run, so that gives me a little bit of confidence that I have some chance of doing this.

Another loop of the Briones Reservoir. When I did this loop two weeks ago, it was a mud-fest extravaganza. I'd consider today's run to be downgraded to only 'really muddy'. You need a permit to use this trail and they were actually out today checking permits. Obsessive rule follower i am, i was oddly happy to whip out my permit (that i laminated, because im a dork)

I returned to the scene of the Great Trail Mudfest 2 weeks ago – the Briones Reservoir. I knew it would still be muddy, but it’s such a great option for a trail run when I’m looking to do 13(ish) miles, it was too good to pass up.

Today the route was merely muddy, not super-duper-crazy muddy like it had been. While there was less mud overall today, the mud seemed a lot slipperier. I feel like I had to tread more gingerly than usual in places so I didn’t fall on my butt.

However, I eventually got into the rhythm of it and the last 10 miles were fine. I was still tired (the whole point of the back-to-back long runs is running on tired legs, so that is a feeling I am looking for), but it wasn’t a total slog.

This trail is maintained by EBMUD, and it requires a use permit. In the year I’ve been running it, I had never seen them enforcing or checking trail permits. I have now had my permit checked two of my last two visits.

I’m not sure if its coincidence, or if something has happened to cause the increased park police presence, but in either case, I’m glad they are keeping people honest- I always wonder what percentage of people actually have permits.

Hydration. I tend to only drink water on the run (getting whatever other nutrition I need from fuel), but I may try experimenting with different sports drinks.