For the last many years, I’ve been a volunteer coach and pacer for my local running club’s marathon training program. Most of my trainees in this program are first-time marathoners (or born-again first timers- folks who ran a marathon years and years ago, but who haven’t run since and are starting again, basically from scratch).

Many get bitten by the marathon bug and quickly begin planning for their next marathons.

In the last few years, a new trend has emerged – a few of my trainees have begun considering an ultramarathon – obviously not dissuaded by my tales of ultra-training misery.

An ultramarathon is any race longer than 26.2 miles. Most first-timers start out running a 50k (31 miles), but ultras can be 50 miles, 100 miles, multi-day extravaganzas, the sky’s limit.

Ultras have skyrocketed in popularity in the last few years. With a few of my marathon trainees now thinking about their first ultras, I’ve also gotten to thinking about what runners should consider before they train for an ultramarathon. 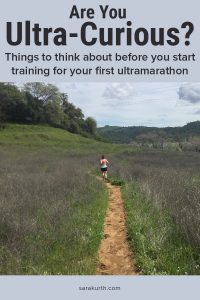 Many ultra training plans have weekday runs that are basically the same distances as marathon training (the 50k training plan I use tops out at a 10 mile run on weekdays).

The biggest training difference are the back-to-back long runs which are a common feature in most ultra training plans. You do a long run on Saturday and then get up on Sunday and run another long (albeit slightly shorter) run.

These back-to-back long runs get your legs, your body, and your mind used to running on tired legs, without doing a single super long-distance run (which can up your injury risk and honestly, would just take forever).

The peak mileage long runs for the ultra training plans I’ve used tops out at running 26 miles (a marathon!) on Saturday and then another 10 miles on Sunday.

I usually try to make at least one of these marathon-distance training runs an actual marathon (just to make it a little more fun). No matter how many times I register for a marathon as a training run, it never feels any less odd.

Learn To Fuel With Real Food

A strong marathon requires fueling on the run.

Hopefully, during marathon training you dialed into the right nutrition equation for you. For many runners (myself included), for a marathon distance, options like gels and blocks are enough to get them through the miles.

Running 30+ miles burns a ton of calories and it just isn’t possible to it do (to the best of your ability) without refueling on the run. And not many runners (again, myself included) can stomach (mentally or physically) eating only food-alternatives like gels for an entire ultra distance.

Nearly every ultra runner I know consumes some real food on the run. Potatoes, PB & J, something.

One of the few instructions I gave my pacers when I ran the American River 50 Mile Run was to make sure I ate a PB&J at every aid station, even if I didn’t want it. And I often didn’t want it, but I did need it.

If you’ve only fueled with gels or the like, start training your stomach to deal with real food on the run.

Can’t stomach real food? Try this- I had a client who wanted to fuel with real food for a marathon, but her stomach wasn’t so sure. She pureed potatoes, sweet potatoes and maple syrup and put them in her kids refillable squeeze pouches. Gel texture, real food content.

Practice On Trails and Hills

At least where I am in the Bay Area, an ultramarathon means trail running.

Trail running (usually) means some not-insignificant elevation gain. There are flat and road ultras around, but they are fewer and farther between.

If you’ve only run road marathons and haven’t spent a lot of time on the trails, review the ultra options near you. If they are trail ultras, get out and run some trails before you commit.

Trails (especially if they are hilly trails) are a whole different running ball game. While I love them personally, they aren’t for everyone.

Know what you are topographically getting into before you start ultra training.

Some marathoners have an aversion to walking (don’t get me started on the pedantic jackholes who would say I’ve never ‘run a marathon’ because I’ve walked some during each of my 33 marathon and ultra finishes).

If you are one of these anti-walk break marathoners, get over it.

All but the most elite runners walk at some point during ultras. This is especially true for ultras with serious elevation gain.

The energy spent trying to run the uphills just isn’t worth it.

You know all those things you know you should do as a runner, but that it can be so easy to scrimp on (or entirely ignore)?

They become increasingly important during ultra training to keep your body healthy.

Up Your Mental Game

I often say that running a marathon is as much, if not more, mental than it is physical.

This is even more true for an ultramarathon.

While it is totally doable if you really want to do it, it is going to hurt.

At some points, it’s really going to suck.

Don’t get me wrong, it’s totally worth it, but you’ll really have to work for it – mentally and physically.

Make sure you have a strong why for your ultra: Why is running an ultramarathon important to you?

Make sure you aren’t just doing an ultra because it seems like the next logical challenge to tackle. Trust me – that why isn’t strong enough to get you out of bed to run another 10 miles the day after running a marathon.

What about you? Are you ultra-curious? What questions do you have about ultramarathon training?

One thought on “Are You Ultra-Curious?”