I have written before that I think all runners should volunteer for races. I practice what I preach- this past weekend I volunteered at the Bad Bass trail half marathon at Lake Chabot. Or ‘Loch Chabot’ as they were calling it. The race has a Scottish theme. The logo is a vicious, kilt-wearing bass. The runners (and volunteers) are encouraged to break out their best running kilts for the occasion.

This is a race that I have run before (several times actually), but for whatever reason, I wasn’t feeling it this year to run. Since it’s been awhile since I’ve volunteered, I felt like I was overdue for aid station duty. 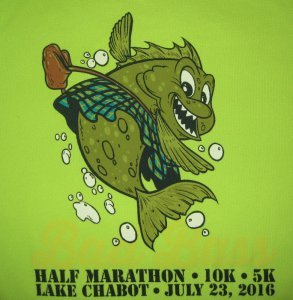 The Bad Bass 5k, 10k, and half marathon, put on by Brazen Racing. I love Brazen races, I think they have the best slate of trail halves in the Bay Area. Many of their races, including this one, have great puns- I do love a good race pun.

And they have ice cream sandwiches!

It was already pleasantly warm when I left the house at 5:30, so I knew we were in for a hot one.

The Bad Bass course this year was slightly different from years past, due to some construction on the usual course. As a result, there were only 2 aid stations that runners went by a few times.

I was at aid station 2. We were the 10K turnaround and the half marathoners passed us going out and coming back. One of our biggest concerns was making sure no 10k runners went past us. It got kind of crazy for a bit so it was hard to keep track, but I don’t think any slipped by (I think we would have heard about it if we missed one).

We were positioned right at the top of a mile long uphill for the runners. Many runners were questioning why they had signed up for this thing by the time they reached us.

At least we could tell them that they were now going to run down the monster that they just ran up.

Most trail runs have fully stocked aid stations and this one is no different:  M&Ms, skittles, jelly beans, mike & Ikes, potato chips, Oreos, paydays, bananas, watermelon, oranges, rice crispy bars, Coke. And of course, all the water and sports drink you could want.

What Runners Liked the Most

The watermelon was an instant hit (it was really good watermelon!). I think I saw more runners take salt tabs than I’d ever seen before.

As the half runners were coming back it was getting really hot, so the ice bucket and sponge bath station were a huge hit. I made many friends just by dumping cold water on them.

What I Ate Too Much Of

A major perk of aid station volunteering? Free range on the goody table!

I started the day with a joke about testing the potato chips to make sure they weren’t stale but then once I got started I couldn’t stop. I only had two small payday bars. They are my usual aid station vice (I don’t know why, I never eat them under any other circumstances), but I managed to mostly resist.

It turned into a hot day, at least by Bay Area standards. Upper-80s by the time we were packing up, and not a cloud in the sky. There was a slight breeze that felt amazing.

I was surprised how many runners weren’t carrying any water. I can’t imagine running a trail half on a hot summer day with zero water, but I guess its more common than I thought.

It was a hot day so we were going through water like no one’s business. I really struggle to open those large, 1-gallon bottles of water. The caps are just a little too large for me, or my grip strength is lacking, or a combination of the two. In any case, I battled the bottles all morning.

By the end of the day, I had a blister on two fingers from opening bottle after bottle. My first volunteer ‘injury!’

Overall, I think a good time was had by all. The Bad Bass volunteers all managed to avoid sunburn by using almost a whole bottle of sunscreen and the runners seemed to be enjoying the course, even though we saw them at the hardest part of the course.

It all make me want to go and volunteer for another race.