This is my 4th time doing the Bear Creek Half Marathon in Briones Regional Park.

It is one of my favorite trail races and during the run, I was trying to figure out why it’s one of my favorites. It isn’t the prettiest run around. It’s neither the easiest, nor the hardest course. It’s always a million degrees (at least on the main ridge). And yet, I really like it.

In the course of 13 miles, you get every type of trail surface, every type of terrain, every type of view. Fire-trail? single-track? This course has them both. Open-space vistas where you can see for miles? Check. Heavily wooded forest? Done. 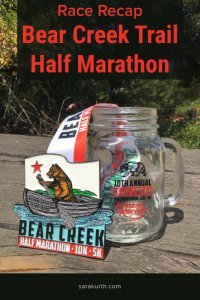 In the week before the race, smoke from the fires up north had begun to make their way down to the bay area. The skies have often been hazy, producing not great conditions for doing anything outdoors.

#1 Not fall on my face. Bear Creek is the site of my first ever epic mid-run face plant. It was a total fluke (I tripped over nothing), and I have no reason to expect it will happen again, but it is one of the first things I think about when I think about Bear Creek.

#2 Set a new course PR (current PR is 2:59). Based on my recent training, and all of the extra trails and elevation I’ve been doing, I’m trained well enough to easily PR. The only wild card will be the air quality. Conditions have varied significantly each day, so there is no way to know if it will be an issue. If it is, I’m ready to throw all ideas of a PR out the window and slow down as much as I need to to stay healthy.

Other than the Oakland Marathon (that starts a 10-minute walk from my front door), Bear Creek is the race that is closest to home. I didn’t have to wake up until 6:15.

It’s almost uncomfortable sleeping that late on race day. For trail races, I’m so used to 4 AM wake-ups and hour-long drives. Hell, in a few weeks, I’m pacing that Santa Rosa Marathon and that race starts at 6:30. 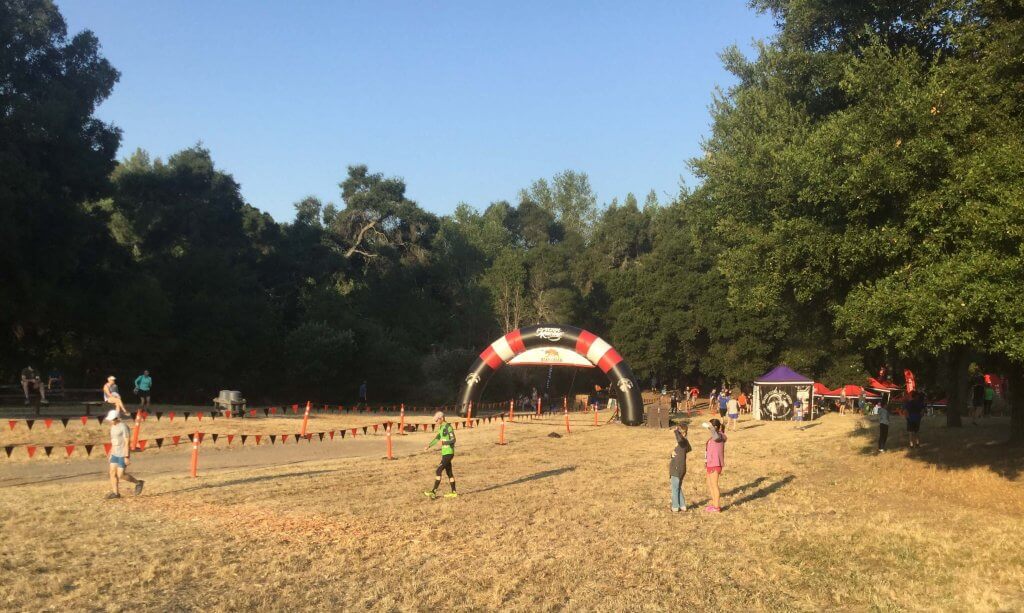 As it turns out, the smokey haze of earlier in the week wasn’t an issue at all.

The course was hot, but Briones always is. I’ve done similar routes in this park in January and it’s hot.

On race day, the course was only really hot, not furnace of hell hot (which it has been in previous years).

When I finished, the car said it was 92. While the thermometer is usually pretty accurate, I never would have guessed it was in the 90s. 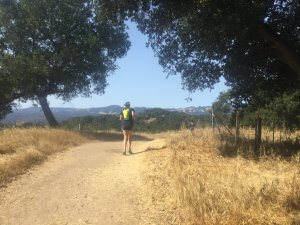 Bear Creek is a grand tour of much of Briones Regional Park. As I mentioned, it has a little bit of everything – open ridges, tree cover, a stream crossing, and many, many uphills (it climbs about 3000 feet).

I know this doesn’t make for great reading, but I don’t have all that much to say about this race.

I felt really strong. My uphill power walking game was super strong. I passed more and more people as the race went on – they were tiring out and I just kept chugging away.

It also helps that since I’ve done this race many times before, I knew what to expect. I wasn’t surprised by the long uphills or the hot exposed bits on the ridge. 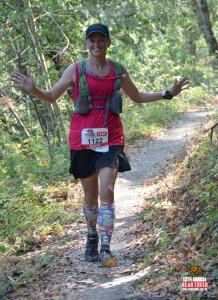 Favorite Part Of The Race

The first few miles of this race are uphill (you’ll notice this is a common trend in many of the trail races I do). After we run up and up and up, we get to the top of the ridge and get see for miles in virtually every direction.

It made me that much happier that it was a clear day so we got the view.

I had two annoyances today.

#1 Runners with amplified music. This is an issue I consistently run into on this course. It might happen here and there elsewhere, but every time I do Bear Creek I’m stuck for a long time by people playing their music SUPER LOUD. AND IT’S ALWAYS TERRIBLE MUSIC.

Today, two different guys were playing their music (loudly) on their phones. One was playing his music really loud and then was basically shouting at the guy next to him while they talked. DUDE- IF YOU TURNED YOUR MUSIC DOWN YOU WOULDN’T HAVE TO YELL TO BE HEARD BY SOMEONE 3 FEET AWAY FROM YOU.

Now, I get that this park is open to the public, and dogs and their owner have every right to be in the park while the race is going on. But there are going to be 200+ runners on the trail. If your dog can’t handle that, keep them on the leash, or take a different path – there are no shortage of options in Briones.

In one section of the course, we were on a narrow single-track stretch. Two different dog owners had let their multiple dogs off-leash and their dogs were running roughshod over everything, coming up to multiple runners, often making the runner move off the trail or stop entirely. In both of these cases, the owners could not have cared less and made half-assed (at best) attempts to call their dogs back to them.

I do love my running skirts, it’s only fair the guys get them too. While women’s running skirts are often way too short, the guy’s running kilts seemed super long (falling well below the knee).

Can’t we meet in the middle and have a unisex running skirt that falls mid-thigh?

This was the 10th anniversary of the race, so in addition to the finishers medals, we got commemorative mason jar mugs.

This race is put on by Brazen Racing, famous for having It’s It Ice Cream Sandwiches at the finish.

By the time I finish, the 5k, 10k, and many of the half finishers have had first crack at them, so the flavor selection is often a little thin for me (especially on the hottest days).

Did I Accomplish My Goal

There were no trips or falls (I knew there wouldn’t be, but still… yeah!).

My finish time (by my watch) was 2:58:04. So new course record! I’m actually surprised it wasn’t more of a course record. This is the strongest I’ve ever felt on this course, by far. 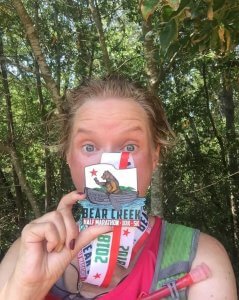 As I said, Bear Creek is one of my favorite trail races.

This Saturday I go down the coast for the Golden State 35k at Fort Ord (by Monterey), and then I’ll go up the coast to pace the Santa Rosa Marathon.

#flatsara is ready to face the bear tomorrow at the Bear Creek Trail Half! It is a bear of a course! We'll see if i need to add in a face mask at the last minute due to hazy/smokey conditions. #bebrazen #bearcreek #flatrunner #toesocksornosocks

Top: Road Runner Sports Sleeveless Tee. They no longer make this top, but I’ll wear this one until it falls apart. I really like this top because: 1) it has a little side pocket for kleenex, and 2) it is long. I hate tops that end right at my waist – this one fall at my low hips.
Bra: Title Nine Frog Bra
Running Skirt: REI. This is one of the first running skirts I ever got. I like my Ryp Wear ones better, but what can I say, I haven’t done laundry in a while, I had to dig deep into my clothing options.
Socks: [amazon_textlink asin=’B0062N9014′ text=’ Injinji mid-crew’ template=’ProductLink’ store=’sarakurth-20′ marketplace=’US’ link_id=’7740097c-9f22-11e8-a3b8-254939c99935′]
Shoes: Asics Trail Sensor
Hydration: [amazon_textlink asin=’B00VVWXVMA’ text=’UltraSpire Alpha’ template=’ProductLink’ store=’sarakurth-20′ marketplace=’US’ link_id=’892f8f26-9f22-11e8-9f19-993c0c46de7f’]
Calf Compression Sleeves: [amazon_textlink asin=’B002U2NKM6′ text=’Zensah’ template=’ProductLink’ store=’sarakurth-20′ marketplace=’US’ link_id=’c09c296f-9f36-11e8-a041-356eeea2d917′] Pop Art, given to me by the CEO of Zehsah himself at a meetup earlier in the week. I usually use compression sleeves more for recovery, but this time of year (when poison oak is in full effect), I’ll often wear sleeves on the run to protect against poison oak.