After recently putting together my database of races, I realized that with Saturday’s finish, this will be the race I’ve done the most. It will be my 6th Bear Creek Trail Half.

This really surprised me. I really like Bear Creek, but 6!?

That’s exactly why I wanted to put together a database of my race history. The more I do a race, the more the details blend together. Even if I’d really concentrated on trying to figure out the number on my own, never would have come up with 5 prior outings. I’m so glad UltraSignup and Athlinks have race finish data, otherwise that information would have been lost to the ages.

I can’t figure out why I like this race so much. It’s largely exposed to the sun. In most years it’s hot and dusty. The course is hilly AF, and yet I keep coming back.

It’s likely not a coincidence it’s across the road from the parking lot of my favorite go-to trail long run spot – the Bear Creek Staging Area for the Briones Reservoir Loop.

A more practical reason I’ve done it so many times is it always fits well into my fall marathon/ultra training calendar and for me, it’s free. The race is a Brazen Racing race. Since I volunteer with them a ton in my running offseason, I always have free race entries burning a hole in my pocket (seriously people, their volunteer-at-one-race-get-free-entry-into-another is the best deal in town).

Based on my 30k last weekend in Santa Cruz, I have two goals: 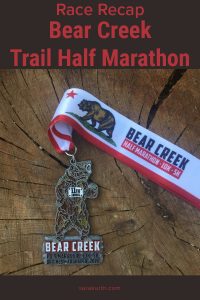 The Course and the Weather

This race is what Brazen calls an ultra-half. It is a touch longer (I think the official measurement in 13.3 miles) and hillier (climbing around 3000 feet) than your run-of-the-mill half.

Just based on topography, this is a tough course. It’s usually made tougher because most of the course is exposed. The high temperatures have been in the upper 80s on race day, and the sun and heat can be brutal on the endless uphill climbs.

But this year? This year the sky was mostly cloudy for most of the run, making the on-course temps a good 10-15 degrees colder than it has been in prior years.

It’s an entirely different experience when it isn’t 90 degrees. It was still dry, so in some places dust was still an issue, but it wasn’t nearly as bad (or as noticeable) when it wasn’t 80+ degrees.

One reason I think I keep coming back to this race is horribleness amnesia. I keep forgetting how tough this course is.

Miles 6-8 are basically all uphill. I’m not gonna lie, I kinda lost my patience at about mile 7 (especially knowing I was only about halfway up the hill). I was totally over it, but there was no option but to keep going.

One secret to ultra running- give yourself limited options to quit.

While I never considered quitting in this race, I try to stay vaguely aware of where aid stations are (especially since this was a course I face planted on a few years ago). What can I say, I can’t seem to shake my risk management training, I like to know where I could get help if I (or others) need it.

On this course, like many trail runs, there are no easy outs. It’s nearly always just as exhausting to keep going as it is to do any other option, so you may as well keep going.

Related, while I love Brazen Races, the one thing I don’t like about their races is they have mile markers. Other local trail race companies may have a few here and there, but Brazen has them nearly every mile.

Bear Creek is a great example of why I don’t like markers nearly every mile on a trail race.

I was paaaainfully aware of how far apart the mile markers felt.

It seemed like I’d been running forever (and walking up endless up hills) and then I come across the mile marker telling me I’m only at mile 4? Urgh!

While I run with a Garmin that measures distance, other than the occasional glance (2-3 over the course of a 3 hour run), I don’t pay attention to my watch on hilly trail runs, I wear a watch on race days to gather information to review later.

Uphill miles feel soooo long and I don’t like being reminded of it.

One of the most enjoyable aspects of this race is a thing a few weeks ago I wouldn’t have even noticed – There was only 1 mountain biker on the course (and he was being respectful of runners and biking at a reasonable speed).

After last week’s bumper car/dodgem cars with way too may disrespectful/ignorant/oblivious/elitest mountain bikers forcing runners into the bushes, it was bliss.

Proof there is always something to be grateful for if you look for it.

What I Did Poorly

I did a terrible job of fueling on this run.

1 GU pack and 3 blocks (and some payday bars from the aid stations) for 13 hilly miles? Not nearly enough.

I partially have no excuse for this, I can only say I did a terrible job.

But I also know I often don’t do a great job with fueling on these super hilly runs. I do so much walking, I can kinda lose track of the fact that I’m running a race for several hours.

I never really got into the rhythm of the run mentally. But like last week at Santa Cruz, I did feel much better and stronger in the last few miles. 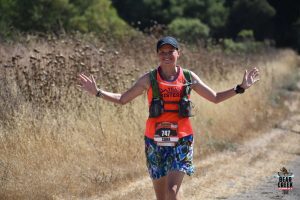 That actually tracks with my training cycle as a whole the last few months.

I’m going through the motions and physically it’s all going well. I’m doing the runs but its feeling uninspired and lacking a spark.

I suppose it’s better than the opposite (mental loving it, but a train wreck physically), so there’s that.

I hadn’t set a finish time goal since I think times are pretty irrelevant for hilly trail courses like this, but for the record, I finished in 2:59. Within a minute of my course record (2:58:04 – last year).

Brazen is known for having It’s It Ice Cream Sandwiches at the finish. I’m not too proud to admit I’ve done races I was otherwise on the fence about doing because I knew there would be ice cream at the finish (another upside of having free race credits, you can have ice cream be the determining factor on racing).

It’s It also has bars (called Super Sundae bars). These are usually long gone by the time the slower half marathoners (read: me) finish. The 5k and 10k finishers have devoured them all.

Today? There were a bunch of bars left. Whoo Hoo!

It says a lot about me that after a long, dusty trail half marathon, my most vivid memory is of ice cream.

I know I will.

My To Dos For Future Race

Given my busy August racing calendar, I’m having many options to perfect my racing strategy: my to dos for future races:

My (maybe not so great) plan of racing every weekend in August continues.

I have a race every weekend in August (yikes!) So #flatsara is ready for #augustisforracing 2: Bear Creek! One of my favorite local trail races, its usually super hot and dusty (why is it one of my favorites again?), but its a @brazenracing race so there are @itsiticecream bars at the end (oh yeah, thats why its one of my favorites) #bearcreek #bebrazen #flatrunner #doitfortheitsit