I’ve mentioned a few times that I have been a race and training program pacer. My guess is that many people may not know what that means, especially if you don’t race in larger races that are more likely to have a pace team.

What Does A Pacer Do?

They keep the pace (who’d guessed?)

Pacers run so that they finish with a specific finish time. I often pace half marathons somewhere around a 2:30 finish time, so my only role is to hold my little sign (yes, holding the sign can get annoying, but unless it’s really windy it’s not an issue), encourage my runners, and finish the race in two hours and 30 minutes.

Each race and each pacer has a slightly different methodology to accomplish this. Some vary the pace or take walk breaks, but average out to the goal pace. Others (I usually fall into this camp) run at a consistent pace. Unless the course is super hilly, I find it easiest to get into a rhythm (the specific time based my Garmin) and stay there.

Pacers are great if you have the tendency to go out too fast or if you have a personal record goal you can line up according to your goal pace and not have to worry about the time.

I’ve found one of the more controversial (that is too strong of word, but it seems apt) aspects of pacing is that everyone- both the runners and the pacers- want different things while running.

When running with a group or pacing an event I am (or at least try to be) supportive and encouraging. While I chat with my runners, I (the classic introvert) also appreciate running quietly every now and again. I try to find a balance. Other runners and pacers are super chatty 100% of the time. Personally, this drives me bonkers- especially over the course of many hours- but to each their own.

Several years ago I ran the Big Sur Marathon. I was not running with a pace group, but I was leap-frogging one group nearly the whole time. I looked up the pacer after the fact- her bio listed her as the ‘party pacer’. I can see why. She had a huge bunch of balloons, streamers, she was singing and chanting pretty much the whole time. I don’t know what her group thought of her, but I did everything I could to get ahead of (or behind her). I found it exhausting just to be around.

But I know some people like that. I now often (sort of) apologize to my pacees- if they are looking for a party, I am not your girl. if you want a little conversation, encouragement, and a finish time pretty dead-on? I got you covered.

The Pitfalls of Being a Pacer

Overall, I really like being a pacer- it suits my running temperament. I’m not the fastest runner in the world, but I am consistent. Once I find a pace and get in the rhythm, I’m pretty much there for the duration.

Pacing on the slower end of the time spectrum has its ‘interesting’ moments. Every race, especially at the start, I’ll hear groups talking about my pace saying how slow it seems (I’m usually pacing around 11:25 min/mile). True enough, but you’re supposed to start slow!

On the other end, often near the end of the race, I’ll hear runners swearing at me under their breath as they see that they are being passed by a pace group they are sure they would beat. I know they aren’t actually swearing at me, but you get the idea.

The other pitfall I occasionally find when races are measured oddly. There is one race in particular that I’m thinking of. I’ve paced a few times and the course is measured based on a runner taking every corner as tight as possible. If you run the course in the middle of the road  (like a normal person) it’s closer to 13.3 or 13.6 miles instead of 13.1. Each pacer I talked to had a slightly different distance at the finish, but we were all comfortably over 13.1.

This means that I can run the race to finish in 2:30 or run at an 11:27 pace (which is the pace listed on my sign), but not both. Either way, results in some fast math on the fly.

Math on the fly is not my strength.

And while I do my very best to finish on my goal time, and I take pacing seriously, but ultimately I’m a girl with a watch

What I Get Out Of It

I enjoy pacing events in the slower range of finishing times. I know I can comfortably pace a 2:30 half marathon on my worst day, so disappointing my group isn’t a concern (I would feel extra bad if I not only didn’t meet my goal, but caused a whole group to miss their goal as well).

The 2:30 and slower times in a half marathon is also where you find many of the first-timers. For many of them, doing a half marathon is the biggest thing that they have ever tried to do. It will soon be the biggest thing they have ever accomplished. Their enthusiasm and excitement is great to be a part of and can be contagious.

I paced one race with nary a soul around me the entire race. I spent the whole race wondering why I got up early and came out, what was the point? After I finished- on time, but alone- a guy came up to me, hugged me and thanked me for being there. He had really struggled and his only goal for the race was to keep me in sight. Aww. Talk about a warm fuzzy, you never know who you are going to impact.

Have you ever used a pacer or had followed a pace group at a race? Is it important for you to have? 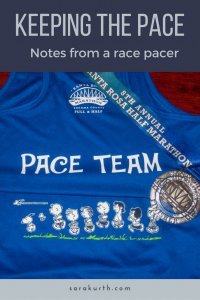