When I started doing race recaps, I worried, “What if I don’t have that much to say about a race? What will I do then?” For several years, this wasn’t an issue. I always had something to write about. Either the race was interesting, or something unique happened on the way, or at an aid station.

But it was bound to happen, and it finally did. A race I just don’t have that much to say about… 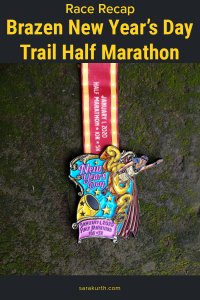 Brazen Racing has races on both New Year’s Eve and New Year’s Day. If New Year’s Eve falls on a weekday, that race is held the Saturday before New Year’s. If you do both races, you get a special medal.

The last few years, when New Year’s Eve (hereinafter ‘Eve’) was on a weekend, I’ve done both, I like the extra challenge. This year, with Eve falling in the middle of the week, I’m only doing the Brazen New Year’s Day Half (hereinafter ‘Day’) race.

I really don’t like the Eve course (it’s flat and beyond dull).

I was willing to do it as part of the bigger event of doing the double race, but for me, the accomplishment of doing both races isn’t as fun when the races are so many days apart.

So only Day it is. Of the two, it is the much better course. It’s at Lake Chabot where there are trails, hills, and scenery.

I’m not sure about running a Wednesday race, however. Other than turkey trots (where I’m more often a volunteer than a runner), I’ve only done races on the weekend.

How do I figure it into my schedule?

How do I prepare?

I’m a routine based runner. I like my pre-race routines, and I’m not sure about getting into the rhythm of a race in the middle of the week.

I tried to come up with a goal for this race, but I just couldn’t get beyond thinking of it as a training run.

I guess I just don’t want to fall on my face, or do so horribly that I feel like 2020 started out on the wrong foot.

Anything short of that, I’ll consider a success.

Here is my recap: The race was fine.

The weather was fine. I felt fine (although I would have likely felt better if I’d gotten more than 4 hours of sleep or had fewer glasses of pisco on New Year’s Eve, but that is the risk you run when doing a race on New Year’s Day).

I ran moderately strong on the uphills and didn’t fall on my face (although I saw two others around me fall at different times).

All in all, it was a good way to start the new decade.

My Favorite Part of the Race 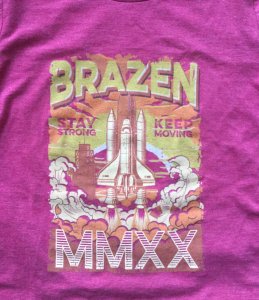 Brazen consistently has the best medals and shirts around.

In particular, I love the motto on this shirt: “Stay Strong, Keep Moving.”

I’ve decided to make this my motto/mantra/tagline for 2020.

The race felt chaotic near the end.

It started later than many half marathons (8:30), and I think many runners took advantage of the hiker start (an earlier 7:30 start to give slower runners and hikers an extra hour to finish the race).

The result was in the last few miles, there were other half runners, lots of half hikers, and 10k runners still on the course (the 10k is really tough so many were still finishing). In addition, the end of the course is on a trail that is popular on any day, and even more so on New Year’s, with all those people starting strong on their exercise resolutions.

It was a lot of people doing a lot of things all on the same path.

I don’t know if it’s the New Year resolution crowd or what, but this race had a different vibe than most Brazen races. 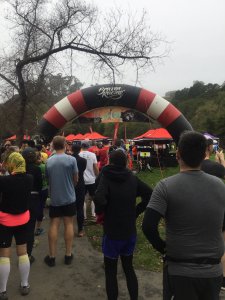 If felt like a road race that just happened to be on the trail.

It all felt crowded. This was for sure true at the end (as I already mentioned), but earlier on the course as well. There were never fewer than 5 people within a dozen yards of me.

There was more trash on the course (nothing that looked like intentional littering, but lots of gel pack tops and napkins that looked dropped), a sure sign road runners, who don’t know the ethics of trail running, have been by.

They even ran out of a lot of the food at the end. Brazen is famous for having a feast at the finish. I’ve run and volunteered with them enough to know they stock the finish line well for the race and the number of runners that have registered. But today, too many greedy 5/10k finishers took more than their fair share. I even saw several non-racers walking the path by the lake eating finish-line food.

They were out of pineapple and melon. The potato chip bowl had run dry.

I grabbed one of the last It’s It Cream sandwiches (the centerpiece of every Brazen race), but didn’t eat it right away. When a friend finished awhile later, she wanted nothing more than an It’s It (she’d been dreaming about it for miles, she said), but they had long since run out.

I gave her mine (who am I to deny a girl her ice cream dreams?) hoping the positive karma would be a strong start to the year.

So I even went home ice cream-less.

My finish time was 2:48, one of my slowest times ever on this course, although I’m not certain which runnings were on which course.

This race has sometimes been run in the opposite direction (a counter-clockwise loop vs. today’s clockwise loop), and there were a few years that did an entirely different course when the bridge necessary to make the course a complete loop was closed for seismic repairs. Ultimately, I don’t care enough about the results to investigate the specifics.

A friend pointed out I could still call this a PR – just that it was the worst time ever, not the best.

Considering my best and worst times for this race are within about 10 minutes of each other, those results don’t bother me in the slightest.

My first race of the new year is in the books! I start 2020 the same way i left 2019 – with sooooo much climbing. I felt pretty good, but my overall performance was hampered by not enough sleep and too much pisco last night- always a risk for New Year's Day races. #bebrazen #brazennyd

I’m No Scientist, But…

À propos of nothing…

And yet it is a really popular place for people to go fishing.

Catch-and-release I could maybe understand, but there are fish cleaning stations by the docks, so people are gutting and eating fish from this dangerous water.

Why would you want to eat something that lived in water that is too dangerous to touch?

What I Have to Say About Not Having Much to Say

I have, and I think others have, an idea that all runs and races need to (or should be) be great. That a not great race = a bad race.

But this wasn’t a bad race.

I felt good. Not amazing, but good.

I fueled fine. Again, not amazing, but fine.

This was what I call a Goldilocks run.

My best training runs are Goldilocks runs – they aren’t amazing, and they aren’t terrible.

When training runs are amazing, it can become all too easy to get overconfident, lose focus, and slack off.

But a Goldilocks run? That is a run that’s good enough for me to be assured my training is on track, but bad enough for me know I have to saty focused.

This run/race (a training run for an 50k ultra on Leap Day) was a Goldilocks run – not amazing, not terrible.

I didn’t fall, get lost, and no blood was shed.

I’m OK with that.

I know I haven’t said a lot of positive things about this race, but even so, I know I’ll do it again.

It is a great way to start the year.

I just wish it was more like other trail races and all the non-running and non-trail riff-raff sat it out.

I have no other races on the calendar until the next big one: Salmon Falls 50k, on leap day 2020!

#flatsara is ready for the Brazen New Years Day half marathon tomorrow, although a Wednesday race is messing with my pre-race routines and rituals #bebrazen #brazennyd #flatrunner