I’d guess most runners have a few running demons. A race or an idea that takes up a disproportionate amount of your mental or psychic energy. Something that makes you face your fears and insecurities.

Some running demons can be big – unfinished business with the race you DNFed, or fairly minor – a hill on your usual running route that you just can’t seem to run all the way up without walking.

Your demon may appear as actual fear or it may appear as the little devil on your shoulder telling you to skip your run and watch Netflix instead.

Why Are Running Demons Bad?

Anyone who’s ever watched a horror movie knows that demons are bad (it’s right there in the name – demons are evil spirits). But let’s get a little more specific – why are running demons bad?

You Can Talk Yourself Into Something Being True

If you think about something long enough it can become a fact. What starts out as a joke with your running buddies about how you can’t run all the way up that hill, can quickly become a fact you start to believe.

Before you know it, you think of yourself as a person who can’t run up hills without walking.

They Can Be Destructive

Your demon can cause you to self-sabotage your progress.

Imagine this – you are on track to accomplish your running goal – whatever it might be. You’ve been following your training plan, doing all your runs.

If you aren’t careful, as you near completion of your goal, you may begin to hear the little devil on your shoulder: ‘You deserve to take the day off today.’ ‘You’ve been doing so well eating right, you should treat yourself – just this once.’

The little devil-on-your-shoulder demons trying to sabotage your progress can be easy to ignore once, but they can get progressively louder and harder to ignore.

They Can Make You Lose Focus On What’s Important

I had a running friend who DNFed a marathon one year. She became obsessed with going back the next year and finishing it.

She didn’t really like the race and hadn’t liked the race experience for any number of reasons, well before her race day DNF. However, she got it into her head that she had to finish what she started, even for a race she knew she wouldn’t like (finish or not).

She could have expended her training energies into a race she would have loved, but instead, her demon made her focus completely on this race, even if it was only out of spite.

They Can Hold You Back

Your demons can keep you from pushing yourself.

I once ran with someone who would have to walk whenever he hit 16 miles. He got it into his head that 16 miles was the longest he could run. He could easily have kept running, except the little voice in his head told him he had to stop.

After my first major mid-run face plant, the idea of falling on the same course the next year seriously limited my performance. I know I could have pushed myself harder, but the evil specter of potentially falling again held me back.

What To Do About Your Running Demons

OK, so running demons are bad (no duh), what should you do about it?

First off, know you’ll likely always have a few demons. The goal isn’t to get rid of them entirely (although it’s great if that can happen), but to learn to recognize them and have the tools to fight them off.

If you’re dreaming about skipping your run for the couch are you being lazy or are you scared of the fact you are coming close to accomplishing your fitness goals?

Fear of failure and fear of success are very real things, and they often can result in running demons who may lead you to self-sabotage as you near accomplishing your goal.

Make sure you know what (exactly) your demon is. 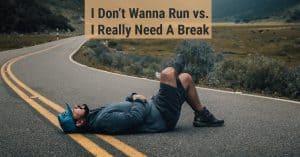 When you know when your demon may appear, you can be ready for it.

If there are times when the demon doesn’t appear, you can use that as a clue about how to beat it.

For example, my ‘I can only run 16-miles’ friend found he didn’t notice his self-imposed barrier when running with a group since he was distracted by conversation. By making sure he didn’t run alone on long runs, he conquered his demon.

Instead of obsessing over that hill (and thinking of yourself as a person who can’t run up hills), name the hill.

Call it Bob or Martha.

Not quite as intimidating now, is it?

Ignore It Until You Are Ready To Face It

This was an analogy I got from Nerd Fitness (which is exactly what it sounds like). If you are a level 1 witch in a role-playing game, and you are facing a level 10 Orc, you won’t fare well.

I’m not a gamer, but even I get the gist of that – you don’t keep going at the monster directly. I’ll defer to Nerd Fitness’ advice on going up against a level 10 Orc – ‘You find a different path, get better and stronger and come back when you are ready.’

Now, this does not give you a pass to ignore the problem indefinitely, but if you DNFed a race due to injury, obsessing over the DNF while you are still injured is only going to lead to moping and obsession.

Don’t give the demon space in your brain until you are ready, mentally and physically, to do something about it.

Laugh In Its Face

This is the exposure therapy approach.

Make yourself face your demon so often you get kinda numb to it.

I hate running hills. The mere idea of them often fills me with dread. But I’ve decided I’m not going to let the hill demon win.

I register for the hilliest races I can find. Train by running endless hills.

I still don’t love them (and I often end up swearing under my breath halfway up), but I’ve gotten stronger and they aren’t as terrible.

The hill demon is still there, but he realizes he’s lost the battle and he keeps quiet (most of the time).

What about you? Do you have any running demons? 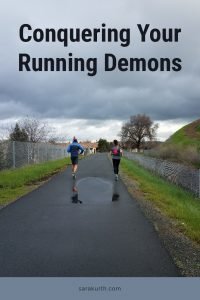