Training for and running a marathon will always be a challenge. While mass race cancellations weren’t the challenge any of us were expecting, it is the challenge we now face.

While I finished my main race of the spring before the cancellations started, I was scheduled to be a pace group leader at the (now postponed) Oakland Marathon in March 2020. I’ve also been a coach and pacer for my running club’s marathon training group, leading my runners through 17 weeks of long runs before the race was postponed (update: the 2020 Oakland Marathon was later made virtual only).

Many of them were going to be first-time marathoners.

They’d put in all the hard work and were so close to race day. 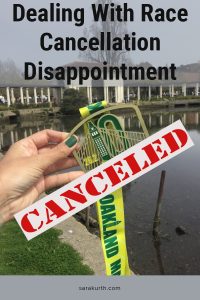 Dealing with bad runs, letdowns, and disappointments is a necessary evil for all runners.

When facing disappointments, be it a bad race or a canceled one, remember:

Allow yourself a little bit of grace.

Allow yourself to mourn what could have been.

It’s OK to be upset. You’ve trained for months and you aren’t going to get the race day you’ve been working towards and thinking about for months.

Especially in our current environment, it’s OK to know the race directors made the right decision to cancel the race AND also be disappointed it was canceled.

Let yourself be disappointed before you move on.

I usually give myself a time limit – I let myself be as mopey and as upset as I want to be for 24 hours.

But then, move on.

The runners who become lifelong runners are those who find some enjoyment and fulfillment in the process of training.

Sure, the finish line on race day is the ultimate goal, but the process of training has rewards too.

OK, so you aren’t going to cross the finish line and get a medal (at least, not on the day and at the place you’d expected), but you trained for a marathon.

Training is a huge accomplishment (and in my opinion, the hardest part of the marathon).

A canceled race cannot and will not take those accomplishments away from you.

Consider yourself a marathoner, even if you didn’t get your race day glory (at least, not yet). 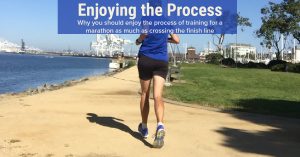 Celebrate What You Did Accomplish

You have no doubt achieved great things during your training – focus on what you did accomplish.

Whether you ran farther than ever before during your training or you finally nailed your fueling on that one long run – celebrate each and every one of those victories.

Revisit Your Running Why

The responses I saw to race cancellations varied wildly.

Some runners seemed to take the cancellations personally, apparently thinking the race directors were out to personally sabotage their race day goals and dreams.

I get it. I love the energy of race day as much as anyone. The anticipation and nervous energy in the starting chute. The exhilaration of finally seeing the finish line. I’ll even confess to kind of liking the pain and the misery we have to sometimes suffer through to get from one to the other.

It’s totally understandable to be disappointed and epically bummed that the race you’ve been training for won’t happen.

But this is a unique opportunity to consider running and what it means to you.

Racing may be canceled, but running is not.

Especially if you are one of the people who don’t see the point of running without races, officially timed race PRs, and finisher’s medals, take some time to consider (or reconsider) your running why.

Other than race day glory, what does running bring into your life?

Is it just a form of exercise?

Is it a stress relief?

A form of moving meditation?

What is your running why?

So, the race didn’t go the way you planned (or at all).

The entire spring racing season is in flux, so doing another race in the next few months may (or may not be) an option.

What non-race related running goal can you work toward?

After so many miles on the road, try hitting the trails. Or simply set a goal to run on a regular basis.

I totally understand wanting a race as an end goal to use as an organizing principle of your running. I’ve often written about not being great about running consistently when I’m not training for an event.

However, races are far from the only running goal around. 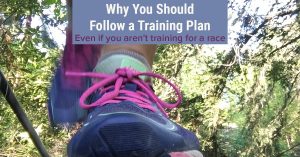 Or, shift your focus and set a new fitness goal, focusing on non-running goals like doing regular strength work or yoga, or finally trying that spinning class. All of which will likely improve your running in the long run, BTW.

Consider what is important to you now and set a new goal.

We will run (and race) another day. 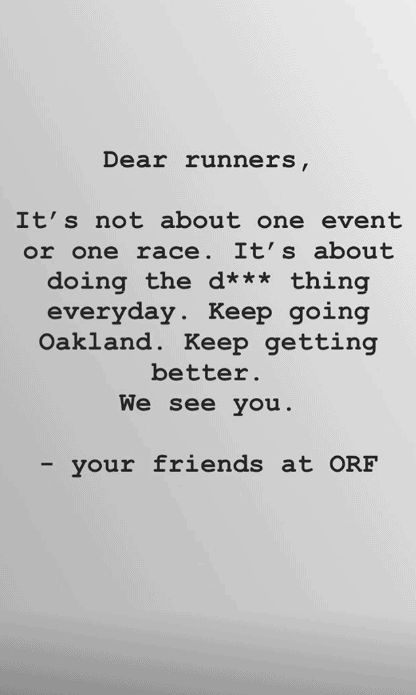