The marathon taper is the last two or three weeks of marathon training. Your mileage decreases as you give your body the chance to replenish depleted muscles and store energy for the challenge to come.

Marathon Taper Do and Don’ts

The marathon taper is an odd little monster.

Some runners love it. Others (myself included) hate it. I tend to go stir crazy.

It took me a few cycles through the marathon taper to realize that if I feel really crappy (especially in the last few days), I’ve done the taper right. 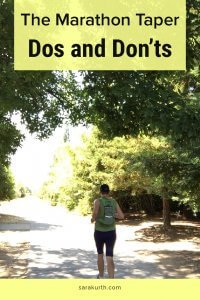 This, for every plan I’ve ever seen, means cutting back your mileage.

It will feel odd to suddenly have so much non-running time on your hands, but this time off is key for your body to prepare for the marathon to come, so respect it.

Do: Trust Your Training

Your mind may wander to all the things you could have better or different during training. Worrying if you did enough.

If you followed your plan, you are golden. If you missed a few runs, you’ll still be fine.

Do: Expect Your Runs To Feel Way Too Hard

This is the biggest surprise to many first time marathoners – the shortest runs during the taper will often feel like the hardest runs you’ve ever done.

I eventually realized that this happens for me because I’ll think about my runs as ‘only’ a distance (‘this long run is only 10 miles!?’) during the taper. Since 10 miles is so much shorter than the 20 milers I have been doing, I expect the run to be easy. But – shock – 10 miles is still hard!

The reasons these runs feel hard varies for each runner, but the phenomenon is very real.

Do: Ignore Your Fitbit

During the taper, stay off your feet waaaaaay more than you are used to.

Again, this may feel odd.

If you are part of any Fitbit work week step challenges with friends, take the week off.

OK, maybe not boring, but familiar

Now is not the time to try your very first Crossfit-Bar-Zumba hybrid class or to try that new Trans-International fusion restaurant that just opened.

Save those new (untested) things for a post-marathon celebration.

Focus the majority of your energy on visualizing race day going according to plan. 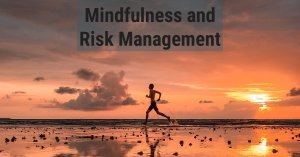 Do: Develop A Race Plan

Consider what you want to accomplish on race day. How are you going to make that happen?

Consider your race, as well as pre-race logistics, timing, and packing.

Do NOT wing it on race day.

You don’t need to do a full, written document if that isn’t your thing, but you should, at the very least, mentally walk through your race plan.

Do: Wash Hands A Ton

Most tapering marathoners become (at least a little) hypochondriac. You will notice more people coughing and sneezing in your vicinity in these three weeks than you ever have before.

Washing your hands is a good practice regardless, but even more so now. 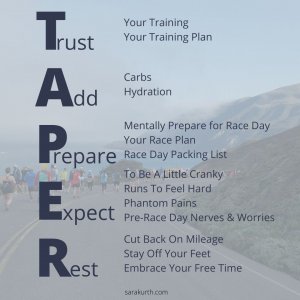 I hadn’t noticed until I was putting this post together just how many of the taper ‘don’ts’ are mental and mindset items.

I suppose this makes sense. By the time you’ve hit the taper, your physical training is basically done. The only thing left to do is to rest, lie low, which often means thinking/overthinking about all the things that could go wrong.

Don’t: Worry If You Feel Fat, Sluggish, Or Irritable

Especially in the final days of the taper, you may feel terrible.

Bloated, irritable and like you wouldn’t be able to walk up a flight of stairs, let alone run a marathon.

Too many carbs, too much water, not enough exercise, pre-race stresses, and the loss of running as stress reliever all combine to create many an unhappy runner.

Don’t: Panic If Your Runs Feel Way Harder Than They Should

Why yes, I did rephrase this and include it in both lists.

Is very common, and it tends to freak out runners when it happens.

A 3-mile, slow-paced run should feel amazing compared to the long slogs you’ve done, but it often doesn’t work out that way.

Don’t: Worry About Things Out Of Your Control

I know, easier said than done, but do your best.

I’d guess most of these worries will fall into two camps: worries about injury/illness/a nagging pain somewhere, or the weather.

If there is something you can do ahead of time to prepare for the (maybe) bad thing, for example, making sure you have your rain gear ready to go, do that. Everything else, let go. 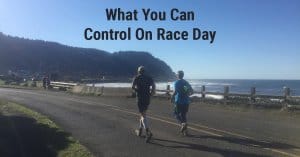 Skip the strength training and hard-core cross training until after the marathon.

Let your muscles rest and recharge for race day.

This is especially true in the last week of the taper.

If you missed a few runs during training, let them go.

Do not do a bunch of extra runs now to ‘makeup’ the mileage difference.

Don’t: Worry About Your Weight

Your body will be storing extra fluids and fuel during the taper (especially in the last few days as you hydrate and carbo load in full force).

You should expect to gain 2-5 pounds in those last days.

If you weigh yourself regularly, consider giving yourself a few days off from the scale in the last week of the taper, if you’ll find it upsetting.

What about you? What have you learned about the marathon taper? 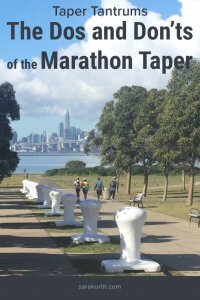