I’ve been running for nearly 20 years. For the longest time, I never really considered how I felt about running.

I keep signing up for marathons. Doing long runs. Acting as a running coach, working with new runners. Writing about running.

I must love it, right?

But as often happens on long runs, my mind began to wander recently during a run while listening to a podcast about productivity, happiness and doing what you love. I don’t remember which podcast, in particular, started me down this path (In the podcasts I listen to these are common themes).

A comment that some guest made really made me wonder, do I really love running?

I began to consider how often I dread heading out the door for a run. All the days when I need to pull out every trick in the book to do the simplest of runs.

Maybe it wasn’t as straightforward of an answer as I’d imagined. 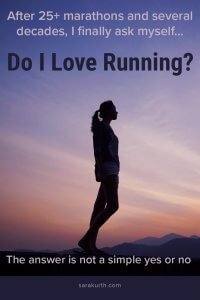 Starting At The Beginning

They often quit because they think running isn’t for them. They don’t enjoy it. It can be hard. Maybe they think it’s boring.

They don’t enjoy putting on their shoes and sweating it out in the heat and the rain and the smog, so they move on to a different exercise program (or sadly, move on to a sedentary lifestyle).

Maybe they think they’re doing it wrong because they see other runners out there every day and (seemingly) enjoying it.

Appearances can be deceiving.

I’m sure there are some runners who love every step of their runs. Who love the actual act of putting on the shoes and heading out the door.

I’m not one of those runners.

What I’ve come to realize, is that for me, very often (if not usually) don’t love the actual act of running.

It’s exhausting. It’s hard. The elements can be terrible. There are much more enjoyable ways to spend a Saturday morning than getting up before dawn and running for 20 miles.

And there is no way around it, running can be boring.

Running for hours on end is dull. 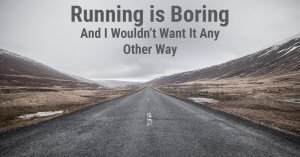 I look at ‘running’ as so much more than the act of putting on my shoes and heading out the door.

For me, running also involves:

Most importantly for me, ‘running’ entails knowing that I’ve run.

That I’ve pushed through a boring, challenging, and tedious run. That I did that run even when I didn’t want to. That I burnt off enough calories to let me eat that cupcake (relatively) guilt-free.

And while I say I hate being sore after a run, that I hate the chaffing and the occasional poison oak outbreak, secretly, I love it.

I worked hard for it, I earned it.

They are reminders and scars of battles fought and won. 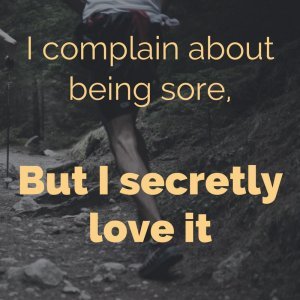 So Answer The Question Already, Sara

So do I love running?

The actual heading out the door, putting one foot in front of the other for hours at a time? Do I love that? Usually? No, I don’t.

But running is so much more than that.

I love having run.

I love the feeling of accomplishment I get from doing runs.

There is nothing better than the feeling of crossing the finish line of a marathon, feeling totally spent and knowing I wanted to quit so many times in training but didn’t.

Knowing there were days when I considered bailing on a run in exchange for a few more hours of sleep but didn’t.

That feeling of knowing I faced every challenge and kept going, exceeding even my own expectations. 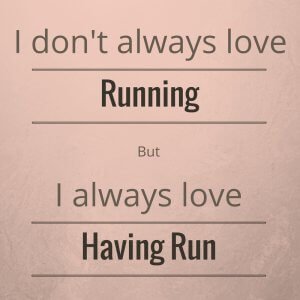 The actual running part of it is just the thing I have to do to get to the other side.

The good stuff is on the other side of doing a run.

So I guess I’ll keep heading out the door, so I can get there.

What about you? Do you love running?

3 thoughts on “Do I Love Running?”