I’ve now written about Drag-n-Fly several times. First was a post about the lessons learned from it as the hardest half I’ve ever done. More recently, I considered my thought process on if I ever would want to try it again.

These posts made Drag-n-Fly a bigger thing in my mind than it ever should have been. It is a hard course, no doubt about that, but I think my ruminating made it a bigger boogie man than it needed to be.

Me? Overthink something into being harder than it needs to be?

The heck you say… 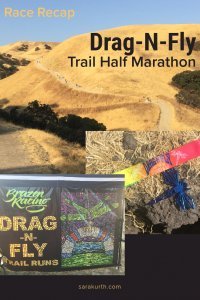 Drag-n-Fly is so named because you ‘drag on the uphills and fly on the downs’.

I find it poorly named. I drag on the uphills, most definitely, but most of the downhills are fairly steep and rocky and therefore require concentration and focus.

There is very little flying on this course.

I first ran Drag-n-Fly in 2011, not long after I started trail running.

I had no idea what to expect.

The course is relentlessly hilly. It is largely exposed with no shade and usually has temps in the mid-90s.

My 2011 running of Drag-n-Fly remains the closest I’ve ever come to dropping out of a race.

I didn’t set a specific pre-race goal other than to survive.

My finish time for my first attempt was 3:36. It would be nice if I could beat that, but if it’s not to be, so be it.

Twas The Night Before Racing…

I usually don’t get too nervous before races.

I don’t consider race performances as terribly relevant to anything, so I don’t get too worked up over what may happen. Maybe a few stress twinges if I’m doing a big race with a mega-expo, but those are pretty rare on my racing calendar.

For the most part, I just show up on race day and do my thing.

This was an exception.

This was the most nervous I’ve been pre-race in a really long time. Could I do it? Was I silly to even try? What was I trying to prove?

These nerves were entirely my own doing, I made Drag-n-Fly a big thing in my mind. Let that be a lesson: keep it all in perspective!

Drag-n-Fly is a lollipop loop course (a bit out, then a big loop, then back on the same bit you run out on). We started and ended in the same place so, because of geographic realities, there needs to be equal uphills and downhills.

I do not understand how that is possible on this course. The uphills are steep and endless. There are some noticeable downhills, but there is no way the downhills equal the ups.

During the pre-race announcements, they let us know that the course cut-off was at aid station 4 (at about mile 10) at 11 am.

I can’t begin to tell you how much time I spent in the first few miles of the run doing the math on what pace I would have to run to beat the cut-off and how it compared to the timing the last time this course (spoiler: I made to Aid 4 at about 10:30 – half hour to spare.)

It doesn’t help that the start of this course (especially about mile 2 to about mile 3.5) is one, big super steep uphill.

Any hope of keeping to any given pace went to hell by mile 3. I was nearly 4 miles into the race and had been walking most of the way.

The later aid stations had OtterPops!

While it wasn’t as hot as my latest outing (it was ‘only’ in the 80s, compared to the mid-90s last time), the frozen treats still tasted soooo good.

I couldn’t decide between grape and orange, so the volunteer gave me both.

I know running, especially trail running and endurance events, tend to draw a fairly affluent crowd. Professional people who have the means and the time to do these kinds of events.

For reasons I can’t figure out, the parking lot for this particular event was the most absurdly Bay Area parking lot ever. There was the usual assortment of Teslas and BMWs, but today every other car seemed to be something absurdly expensive: several Jaguar SUVs (I didn’t know Jaguar made an SUV), a few Bentleys, a Maserati, a Fiskar.

Who drives a Fiskar to park in a dusty lot at a regional park?

So… Was It As Bad I Remembered?

No. It was easier than I remembered, but by no means easy.

It helped that this year:

Did I Meet Goal?

I also feel like I slayed the demon along with a few of my doubts.

While a 3:18 half marathon isn’t exactly a land speed record, I did beat my previous course record.

Besides, I’m proud of myself for even starting.

However, If I don’t ever do Drag-n-Fly again, I know it’s not out of fear, or a concern that I couldn’t do it.

Now it’s just another possible race on the calendar that I could do (or not).

The only race left on the calendar is the biggie for the year: the Skyline To The Sea Trail Marathon – in only a few weeks!

How much do I love this medal from the Drag-N-Fly Trail Half? All. All the loves is how much. #medalmonday #dragnfly #brazenracing