Drag-n-Fly (so named because you supposedly drag on the uphills and fly on the downs) is my one time trail running nemesis and boogie man. Now, it’s just a trail monstrosity that I inflict on myself every so often. 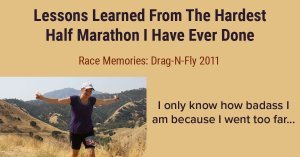 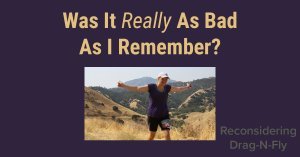 My once upon a time fear of Drag-n-Fly is gone, but I stand by my original belief that it is the hardest half marathon around.

Other half marathons may have more climbing, but out near Antioch (where Drag-n-Fly is held, in Contra Loma and Black Diamond Regional Parks), it’s often 80-90 degrees and much of the course is totally exposed.

Last year’s running was downright pleasant (in the 70s), but prior years (including my first outing in 2011) were in the mid-90s, where the only relief was from the cool air coming from the entrance to an old mine in the park.

The forecast this year? Put it this way- in the pre-race email from the race directors, they noted the forecast is for hot temps and suggest sunscreen and carrying water (ok, always good and sensible suggestions). They added: “It is important that all participants honestly and carefully consider their choices in distance and in the effort they put forth.”

This is a Brazen race. I love Brazen races and run and volunteer with them often. They are not fear mongers or inclined to exaggeration. When they are advising runners to drop down to a shorter distance, that doesn’t bode well.

For whatever reason, I don’t feel as well trained as last year when I PRed the course – 3:16. Especially given the forecast, I don’t think a PR is likely (or advisable to attempt).

Knowing I’ll be walking a ton, I think my goal is to keep my uphill power walk game strong throughout, but especially on the first major uphill.

The first major uphill is a killer of morale, hopes, and dreams. 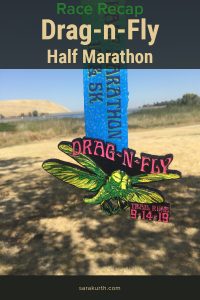 When I do these recaps, I usually include notes on the weather. Honestly, it’s usually a bit of a throw-away. Especially the last few years, since I’ve been really lucky with great weather on my various race days.

Drag-n-Fly this year was all about the weather.

The first sign of things to come? It was in the mid-70s as I was driving to the start, and that was before 7am.

By the time I was done (so many hours later) my Garmin read 94 degrees, my car thermometer (which usually is pretty reliable) said 102. 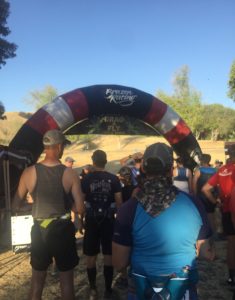 This was the smallest group at the start line of a Brazen race that I’ve been with in years.

I think many runners took the race director’s advice and either dropped down in distance or started with the hikers (Brazen usually has a ‘hiker’ start a half hour before the start – giving those who are slower an extra half hour to run).

I wasn’t around to see the hiker start, but I passed way more hikers than usual, so it must have been a big group.

Drag-n-Fly starts with a few little rolling hills and hits the first big hill about 2 miles in (this is the hill pictured above). I always get a little bit of vertigo standing at the bottom of it and looking up.

After these rollers and starting up the big hill, I knew this wasn’t going to be a ‘firing on all cylinders’ kind of run. While I didn’t feel terrible, it felt like the uphill slog it was.

This was going to be a ‘just keep moving forward by whatever means necessary, at whatever speed necessary’, kind of race.

I never got close to considering dropping (my first outing at Drag-n-Fly was the closest I’ve ever come to dropping out of a race), but I spent the next 3 hours wondering why I keep inflicting this race on myself.

Drag-n-Fly is a lollipop course. We run out, then do a large loop, then come back, back-tracking on the first stretch we started out on.

The total elevation gain is just over 3000 feet.

This race may have been named because you can ‘fly on the downhills’ but this is a lie.

For me, there isn’t much running happening on this trail ‘run’. With the heat this year, I thought of it more as a death march than a trail run.

During the first big hill, I was shocked by how many people were running up the very steep uphills. One girl in particular I noticed ‘running’ the hill. I was hiking (I wouldn’t even call it power hiking at that point). We were going the same speed.

She was expending all sorts of extra energy with the up and down of her ‘run’ (and it seemed to be an especially bouncy run) I was a little baffled by it.

I passed her about a mile later (we were still going uphill) – I was still walking, as was she by then.

Seriously, there is little upside for normal runners to try to run up a 2+ mile uphill.

Although I will admit the super long stretches of walking can mess with your head after a while. I just kept thinking (after walking for 2-3 miles – all uphill) ‘at some point I have to start running right? This is a run.’

I try to be responsible about sunscreen when I run, applying sunscreen before I run and carrying some with me to reapply.

Even so, with the heat and sweat this year, I was planning on at least a little sunburn on my neck or shoulders.

I must have been more responsible than I thought – not a touch of sunburn anywhere.

Brazen always has amazing and well-stocked aid stations. Shout out to them today for making sure they had even more water and ice for water-pack refills and ice sponges over the head than usual.

The basics were provided in spades.

I refilled my pack twice (it’s rare I need a pack refill on a half marathon), and man ice-water tasted amazing.

The last two aid stations had otter pops, but they had melted! I don’t know if they didn’t have enough dry ice or what, but they were more cooled kool-aid tubes than otter pops.

Now, on the hierarchy of needs for trail runner during heat wave, otter pops are the least important thing possible. But they taste soooo good on a hot day. I was bummed they weren’t an option.

I finished in 3:25, better than I expected considering the weather. Between the tough course and the heat, finish times for Drag-n-Fly can be a little wonky. For reference, the first place female finished in 2:15.

Did I meet my goals? I don’t feel like I had a particularly strong power walk game, but considering the conditions and my not-terrible (considering) finish time, I must have been stronger than I thought, so maybe?

I’m happy with my race, regardless.

I wouldn’t have done anything differently. I didn’t want to push myself too hard. The conditions were tough, and this was, for me, a training run. There was no upside to pushing myself to the limit.

This wasn't a trail half marathon, it was part hike and part death march. Very little running was involved. Neverending hills, little shade, and insane temps (94 according to my Garmin, 102 according to my car). I knew from the first hill it was going to be a 'just keep moving forward by whatever means necessay' kind of "run". #dragnfly #bebrazen #uphillbothways #runallthehills #savedbytheotterpops

I keep saying I probably won’t do it again. The hills are insane and I forget how hard it is to run in 90+ degrees.

I know I should wisen up and stop it already, but I’ll be back.

It fits into fall marathon/ultra training too well, and I always have free Brazen race entries from all of my volunteering with them.

Apparently, I’ll put myself through anything if it’s free.

Skyline to the Sea 50k

When the forecast is for over 100 degrees, and the trail half marathon is mostly exposed, #flatsara comes prepared with 3 different sunscreens- 1 for before, 1 for my neck (my poor, abused, much sunburnt neck) and 1 to carry along for frequent reapplications. 4000+ feet of climbing in 100+ exposed-to-the-sun temps? What could possibly go wrong? #bebrazen #dragnfly #imayjustselfcombust #flatrunner