As an introvert, I’ve always enjoyed solo runs. I’ve never had a problem heading out the door for a long, solo run.

But, contrarian as I often am, I’m finding solo runs a lot less fun now that they are my only option. While I’ve come to appreciate the benefits of group runs, the last two months have been the first time I’ve ever longed for a group run (Me? Missing not being able to make small talk on the run? Who am I?).

But group runs aren’t a healthy option these days in light of COVID restrictions, so more solo runs it is.

While solo runs may be the only realistic option these days, that doesn’t mean they are a second-best or an ‘I guess it will have to do’ runner-up option.

Just a few of the benefits of solo runs:

No meet up times and waiting around for that one person who is always late.

No compromises on pace.

When running alone, you only need to worry about one thing: what works best for you?

You can run the route you want to run, at the pace you want to (or need to) run. Want to take it easy on days when you aren’t feeling it? Go for it, without worrying about slowing up the group.

You can stop for a mid-run potty break, without feeling guilty for making others stop too.

Running solo is one of the few times in life when you can be unapologetically selfish – running on your schedule, at your pace, for your desired distance.

Practice Relying On Yourself

Running is a solo sport.

Even if you have a coach and plan on running with a pace group on race day, you are ultimately responsible for your race.

You are responsible for having (and following) a fueling and hydration plan. You need to keep going when you want to quit.

Running with a group can provide some much-needed encouragement and support, but when push comes to shove, you are the only one who can (or cannot) accomplish your goal.

Listen To Your Body and Your Mind

Group runs are great for zoning out. Getting lost in conversation can make the miles just disappear.

While that’s great for getting the miles done, it can take you out of your body.

There’s a lot you can learn from paying attention to what’s going on in your head and really feeling your body. 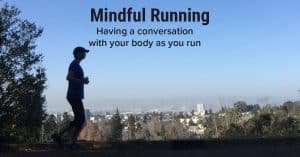 Groups are a great encouragement to get out and run when you don’t want to. More than once I’ve gotten up to do a long run on a cold, miserable day when I really didn’t want to run, solely because I knew a group was expecting me.

But an important skill to master is the ability to do the thing you don’t want to do, based only on discipline and an internal drive.

When you run alone:

Personally, I’ve never gotten lonely or bummed out by solo runs, but I know other runners who dread having them on the calendar.

Solo runs don’t have to be sad and lonely. A few ways to make them more exciting:

The main reason I’ve never been bored on a solo run? I listen to dozens of podcasts. History, business, pop culture, true crime, self-improvement. You name a genre, and chances are I subscribe to at least one podcast on the topic.

Or put together an amazing playlist of your favorite songs.

Just be sure to still pay attention to your surrounds while listening to your earbuds.

Run together, but alone.

Many apps have live (or taped) runs you can run along with so you can have (virtual) friends and a coach to run with. Open Fit and Peloton are two apps I’ve tried.

Or, go informal and Facetime/Zoom/Google Meet with friends on the run.

These group solo runs not only provide company, but also accountability. When your workout is an appointment (either with your friends or with an app run at a set time), it is much harder to bail on it.

I’ve always been a fan of self-bribery as a motivational tool.

Listen to a guilty pleasure audiobook or your favorite podcast only on a solo run.

Plan on buying yourself a new piece of gear after finishing a set number of solo runs.

Pick a Strava segment and see how many times you can run it in a month.

Pick a measure and race yourself.

Focus on Form or Technique

Before you start to a run, pick an area to focus on: Breathing, stride length, cadence, posture, arm swing, footfall, to name a few options.

Spend the run focusing on that area, tweaking it or modifying it. See how the changes feel.

Various fields on your Garmin can help zero in on the more technical areas like cadence and stride length. 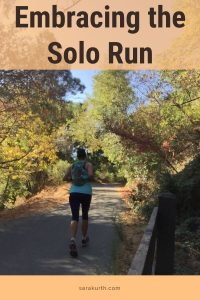 Embrace solo runs. Be selfish, focus on your form, and listen to all the podcasts you could ever want to listen to.