The Empower 10k was put on Sweat Pink and Fit Approach, the same ladies who put together the Blogfest fitness blogger event I attended a few weeks ago.

I get to see my new friends again already!

Disclosure: I was an ambassador for the race and was given free registration.

The Empower Race Series had many running and yoga options, including sunrise yoga, 5k, 10k, and 1-mile runs, slow flow yoga, and a High-Intensity Interval class.

Since I’m not one to pass up… well… much at all, I decided to do both yoga classes and the 10k.

I maybe would have considered the HIIT class too, but it was held at the same time as the run, so I had to choose. 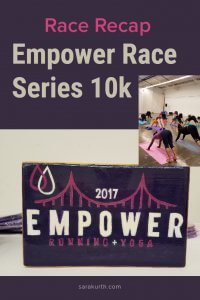 I didn’t set any.

I can’t remember my last 10k, and I’ve never done a full yoga class before a run.

Will that be better for the run? Worse?

Since I decided to do sunrise yoga, I had to wake up accordingly. The problem with sunrise yoga is it happens before sunrise – which is REALLY early. 6 AM in this case.

Urgh, all my races lately involve pre-5 AM wake ups.

It was a bit windy and cold for hanging out pre-race, but once we started running, it was perfect weather for a run along the waterfront – overcast and 60s.

I haven’t done much in the way of full yoga classes recently.

I’ve done many yoga-infused classes and shorter 15 or 20-minute yoga mini-classes, but a full one hour class?

It was enough to wake up my muscles, but not enough to wear them out.

The Empower 10k course is along the waterfront in Richmond.

Being a marathon runner in the midst of marathon training, a 10k race felt kind of odd. I wasn’t sure about my pacing or my timing. I’m so used to ‘races’ being me and my slow plodding for hours.

But a race that involved me actually running kind of fast? Odd.

I felt strong and found a pace that felt good and settled into it. I also tapped into my marathon skills of pacing and stuck with my pace throughout, actually doing negative splits (just barely) and passing other runners as they slowed down.

The last few miles were kind of fun, passing other runners. That’s a new experience for me.

And the punchline? I finished 7th overall and 1st in my age group!

If I’m not careful, I’ll lose my (self-proclaimed) title of the voice of the middle of the packers everywhere. Kidding – I’ll come back to reality next weekend at Bear Creek.

I have a complicated relationship with age group wins.

I’ve talked before about my only other age group win (short version: it was for fortitude in terrible weather, not speed). I am used to looking at my finish time and finish place (usually in the bottom third) and immediately discounting its importance and relevance to my value as a runner.

Then I go and win one.

My brain isn’t quite sure if it should discount the win too.

The more I think about it, I think I set a 10k PR on this race by default.

I’ve done a crazy hilly trail 10k, but that wouldn’t really count as a PR. I’ve done many marathons, halves, and 5ks, but 10ks are a fairly untapped distance for me.

I had been on the fence about doing the post-race yoga (slow flow), but the sunrise class was my good luck charm and I was feeling good, so why not?

Slow flow yoga also felt great, although my quads were shaking a bit (more than usual) during various lunges and warrior poses.

I also loved that on the mat next to me was a little girl doing yoga with her mom. It was totally adorable and made me smile every time I saw her.

She made it through the whole class like a champ. 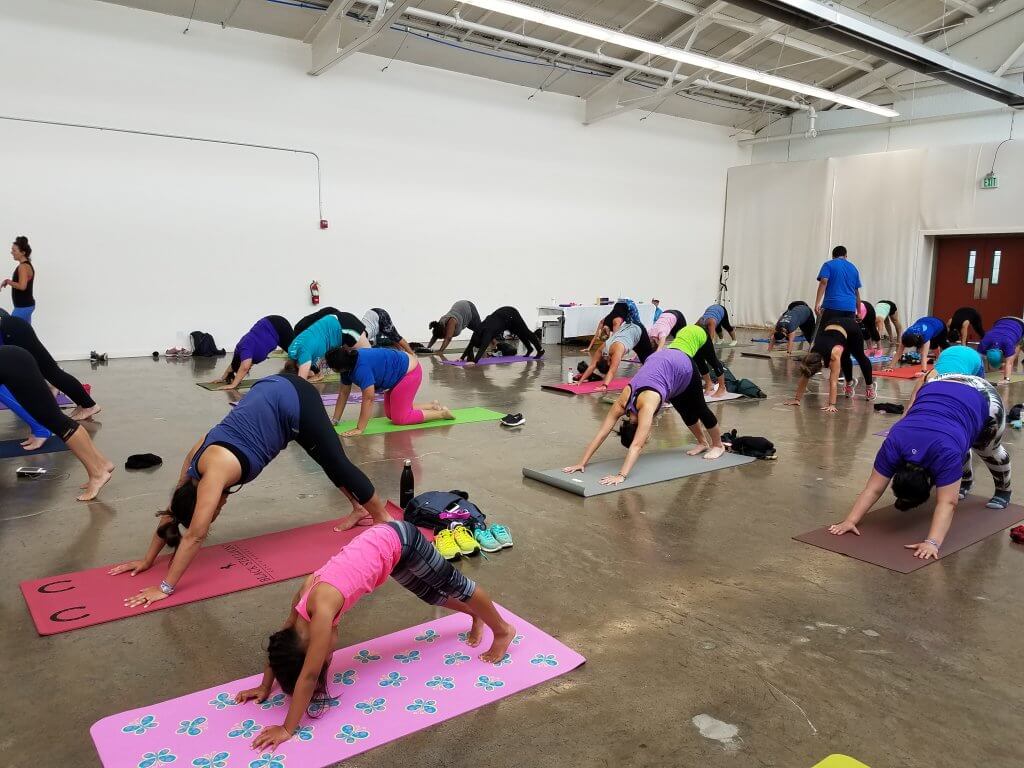 Empower didn’t have medals, which I like. I’m not loving the recent medals arms race with bigger and crazier medals at every race. I don’t need a 3 pound-triple spinner medal for every race I do.

They had something even better! Finisher bracelets from momentum jewelry.

I’ll get more use out of this bracelet than every other medal I’ve ever gotten put together.

Post-Race Reward To Myself

I’d heard rumors that their prices are amazing, but you have to be an employee to enter, so it was a land of unknown mystery to me.

The prices were, in fact, as good as I’d heard. I didn’t need anything, but I didn’t let that stop me!

My least favorite part of the race happened weeks before- trying to figure out the registration options.

There were multiple options for different race and yoga combinations – yoga only, 5k (with yoga), 10k (with yoga).

If I read the options right, yoga only was the most expensive.

How could that be?

I can’t have read that right, right?

I may be biased since I was an ambassador and know the event organizers, but it was a fun event with a good energy.

The (multiple) yoga classes added a new and fun spin, so it wasn’t just another run.

I also like women’s races that aren’t too girly.

While I love (the occasional) tutu and tiara run, I’m in a more serious marathon-training mindset at the moment and I was glad this race had a supportive and positive energy to it without the feather boas and tutus that can so often come along with it.

You Can Never Have Too Many Positive Mantras

I Run This Body and IAMEmpowered

Your Only Limit Is You