Several years ago, I was in the midst of my most runniest year ever. I was on track to do 3 marathons and was about to begin pacing and coaching a marathon training group for the first time. All while continuing with my usual slate of one or two half-marathons a month.

Near the end of the year, I was wrapping up my training for the last marathon I had scheduled: The Death Valley Trail Marathon. Hotel was booked, car and airfare were reserved. I was set.

One random day I was walking to the bus stop, like I did every other day. I stepped off the curb wrong and broke my foot. It wasn’t a running injury, I wasn’t on a run. I was in street shoes, walking.

First of All, the Bummer

Whenever something bad happens, the first to hit is the bummer-ness of it.

In this case, I was pissed at myself for the irony of the injury. I was doing a ton of running that year, a fair bit of it on trails and on uneven surfaces. But that wasn’t what got me. It was walking.

I was also bummed that I would have to cancel the trip – I wasn’t going to make it to Death Valley that year.

I still could have gone. While I couldn’t run, I was in a walking boot and was fully ambulatory. But I know I wouldn’t have dealt well with being at the hotel with all of the runners recounting their running exploits. The trip was off.

But Then, The Silver Lining

I don’t tend towards radical optimism. I will never be described as the Pollyanna type, but I do think there is always some silver lining to ‘bad’ events.

It may not be huge, and you may need to take some time to look for it, but it’s there.

Eventually, I figured out what it was – I was pushing myself too hard. I was on track for a running injury of some sort, or at least runner burn-out. It’s highly likely I would not have survived that crazy year of running ambition with my love of running intact.

Once the bummer of it all wore off, there was almost some relief that came with my doctor telling me the foot was broken. It wasn’t something I could push through (which would have led to my foot not healing right). It was definitive. Full-stop.

I was sidelined. In a walking boot for six weeks. Doctors orders: Sit on your butt and chill.

‘It’s broken,’ was exactly what I needed to hear, although it took awhile for me to realize it.

It was just what the doctor ordered – literally and figuratively.

The added bonus was the glee I found in hearing my doctor tell me to stop exercising and sit on my butt and watch TV (at least for a while).

How to Find the Good in a Bad Situation

Maybe it’s an injury. Maybe it is a bad race.

Whatever it is, force yourself to really consider it.

A common reaction when something goes wrong is to be mad, upset, bummed, pissed or frustrated.

Don’t fight these feelings if you feel them coming on. Give yourself some time to be mad. Be pissed. Get angry. Mourn what could have been and vent.

But put a specific deadline on it. A few hours, maybe a day, and then move on.

For me, it’s often the rest of the day. Until I go to bed on the day the bad thing happened, I will cry and moan, and be as pissed as a want for a day, guilt-free. Get it all out of my system.

When I wake up the next morning, its time to let go and move on.

Why Are You Really Upset?

Once you move on from being upset, you need to pinpoint why – exactly – you are upset.

I’ve sometimes found that I am only upset because I feel like I should be upset.

Pinpoint where the anger/frustration/piss-offedness is coming from to help you focus.

What Still Went Right? What Did You Learn?

I’m sure not everything went wrong. Even in the worst situation, something was at least less than terrible.

Some questions to ask yourself:

Keeping it all in perspective can help minimize the impact.

My broken foot told me I was pushing too hard and I need to chill.

What is your ‘bad’ event telling you? 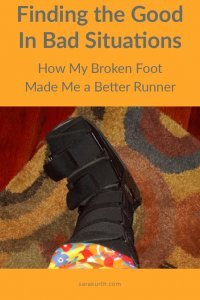 One thought on “Finding the Good in Bad Situations: How My Broken Foot Made Me a Better Runner”