I recently volunteered at a trail race with 5k, 10k, half marathon, and 50k distances. My aid station was at mile 19 of the 50K race. We weren’t going to see any runners from the other events.

Except that we did.

We eventually figured out what happened. While there were clear markings where the 50k and the half courses split apart, he hadn’t been paying attention to the signs or course markings. He blindly followed the runner ahead of him.

The problem was the runner ahead of him was running a different distance. 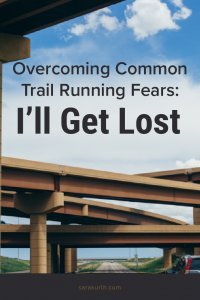 Getting lost while trail running is a common fear and is a real risk.

I recently volunteered at a night trail race where the temperature was around 40 degrees. If a runner had gotten lost, hypothermia would be a real possibility. Granted, this is an extreme example, but you get the idea.

Be aware of the potential to get lost, take steps to prevent it and minimize the harm if you do, but don’t let it scare you away from heading out on the trails.

Advice For All Trail Runners

Whether you are running on your own, or are taking part in an organized trail race, there are some tips all trail runners should follow to minimize the chance you’ll get lost.

There is no single definition of a ‘trail.’ Pick your trails based on your comfort, confidence and experience level.

Start on straight-forward, well-marked trails while you get more comfortable with navigation and way-finding.

Leave the hard-core, scarcely marked single track trail for when you are a little more experienced.

GPS watches and phone navigation can be patchy (at best) on the trails. Even on trails in urban environments.

Get a paper map of the trail you’ll be on and carry it with you.

Just this past weekend, I did a trail run in a park I was visiting for the first time. Since I wasn’t 100% sure of the course, I carried the map in my hands. During a 6-mile run, I had three separate people stop me and ask if they could check out my map since they were not able to access the map they had bookmarked on their phones.

Trail running isn’t the time for zoning out like you can (to some degree) while running on the roads.

Paying attention to where you are and where you are going may prevent you from getting lost. It also has the added benefit of lessening the chances you’ll trip and fall over roots, rocks and all sorts of other trail calamities.

Do you have a good sense of direction or are you always getting lost?

Having a good sense of direction does not remove the responsibility of planning, paying attention and carrying a map (every runner should do that), but if you know you generally have a terrible sense of direction, it becomes that much more important.

When You Are Running On Your Own

If you are running alone, there are a few extra steps you can take to prevent getting lost.

‘Winging it’ isn’t the best approach to finding a trail running course.

Pick the route that you are going to do ahead of time. Then get a (paper!) map of where you’ll be and carry it with you.

If you are running an out and back course, occasionally look behind you, especially at intersections and forks in the road.

It doesn’t seem like it should look that different when you head back, but it often looks entirely different going the other way.

Keep Someone In The Loop

When you head out for a run, make sure someone (who isn’t running with you) knows where you are running and when you’ll be back.

Yet another good reason to make sure to pick a course in advance!

During A Trail Race

Just because you are running a race that has a pre-marked course, you aren’t off the hook.

You still need to pay attention and make your own way to the finish line.

Review the course in advance and print a copy of the map to have with you on race day.

While reviewing the course, specifically look for sections that may create confusion such as turns or points where different race distances separate.

Review the markings that will be used on the course. This information is often on the race website and there is usually a pre-race briefing.

Pay attention to course markings, they (or the lack of them) may be your first indication you are off-course.

Just ask the runner we found at our aid station who was (way) off-course – never blindly follow the runner ahead of you.

They could be lost.

They could be doing a different distance.

Or maybe they aren’t part of your race at all and are just out for a jog.

Have you ever gotten lost on a trail?
What is your best advice to prevent getting lost? 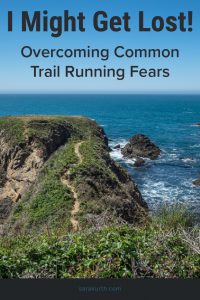