This is the first race in a really long time where I have no idea what to expect. Most of the trail races I’ve done in the last year or so are either races I’ve done before or where I at least know the park or the general area.

Fort Ord is a former Army base down near Monterey (closed in 1994, and now a National Monument – and yes, I did look up the history of the area before race day). I’ve checked out the course maps and elevation charts, but that can only tell you so much.

I’m still not entirely sure what to expect, but a big reason Golden State caught my eye was it was further afield and it was a new course to me. It’s also a new race to the race directors. They have other races in the area, but this is the inaugural Golden State race.

Have fun and take it easy.

Relatively speaking, this course isn’t as tough as some of the other trail runs and races I’ve done recently (at least from an elevation gained/lost POV), but this will also be the longest run I’ve done since the Oakland Marathon in March.

Wake-Up And Travel To

I’m still gun-shy after Salt Point, and a little nervous that the driving directions listed two different address (about 40 minutes apart), so I left god-awful early (4:15am), and was quickly greeted on the interstate by ‘3 right lanes closed’ signs.

Nope it was right. Traffic was brought down to one lane because of overnight bridge work. I’ve had more ‘odd driving to race’ events in the last month than I have in the last 20 years.

I’d considered camping somewhere Friday night, making more of a road trip out of it, but Monterey on a Friday night in summer makes lodging 1) rare and 2) expensive. I’ll just get up early thanks.

The starting (and parking) area was at the Laguna Seca Raceway, which is right next to Fort Ord.

We’d been told parking was $8. Fine, I get it, but it always bothers me when you need to pay for parking at races. Race entry fees are $60-100, it seems like the race directors and the park could come to an agreement to have the parking fee included (for me today, the race was free – I’m still using race credits from my off-season volunteering binge – but in theory…)

The upside to arriving before the ass-crack of dawn? The parking people weren’t there yet, and unlike State and local parks that have after-hours envelopes where you still have to pay, here at the raceway you just didn’t pay. Score!

We had all the weather.

It was foggy when I got to the parking area and the fog was burning off as we got started. But less than a mile in, we entered a cloud bank and stayed in the fog for miles. I actually would have liked gloves in those first few miles.

The fog was so thick it condensed on me, it was cold!

About halfway through the race, the clouds had entirely burnt off and it was clear blue sky and hot.

The course was backward for the weather, the first half (the cold and foggy bit) had more trees and cover, the second half (the hot and sunny half), was on a ridge and was almost entirely exposed.

For a change, the first few miles were not uphill (which has been the pattern for the last few trail races I’ve done). In fact, the first 6-10 miles were the ‘easier’ bit of the course. Between the cool foggy weather and the downhills, it made for a great start to a race.

There was a lot of variety of vegetation on this course: moss-covered trees, open-space ridges, coastal chaparral.

Much of the first 10 miles were in areas of Fort Ord where there were signs: ‘Closed – munitions removal project in process’. The race signs clearly said where to go (the whole course was super well-marked), but they didn’t always mesh with the warning signs.

I had no real doubts of the safety of the trail, but even so, I did make a note that this was not a good place to step off the trail and pee (not that I had to, but still).

Most of the uphills were saved for the last 5(ish) miles (which is also where there was zero tree cover and full sun). It wasn’t the best combo, but I did my power walking thing and all was great.

Can you spot the runner?

Oddest Part Of The Course

Laguna Seca Raceway was right next door. While there was no official race going on at the Raceway, there were pre-events for a big thing next weekend. So cars were roaring around the track. LOUDLY.

Generally, I would have been annoyed by that kind of thing – the roar of cars while I’m trying to enjoy nature, but in this case, it was so odd and out of place, I kinda liked it.

Here I am, running in what feels like the middle of nowhere, but with NASCAR-like noises zooming by pretty constantly.

It was such a non-sequitur for a nature-filled trail run, it was kinda amusing.

Let’s Do The Time Warp

This race was one of those races where I had a total time-warp thing happening.

My finish time was (basically) 4:40. If you would have asked me how long I felt like I’d run, I would have guessed maybe 2 hours.

I love it when that happens.

The 35k and 50k runners started at the same time. I was hoping to finish before the first of the 50k runners. In the last mile or two, the (eventual) 50k winner passed me.

I was close, but didn’t quite make it.

Results (a/k/a ‘so that happened’)

I won my age group and was the 3rd overall women’s finisher.

When the guy told me, our conversation went something like this:

Now, my natural reaction is to poopoo it – to point out it was a small race and not many people ran the 35k (for the record, there were 16 finishers in the 35k) or that age group wins say more about your competition on any given day than your performance.

But I got thinking about it on my drive home. My natural reaction is to list the reasons my wins aren’t important (I did the same thing when I came in second in my age group at Pacifica). But in doing so, I’m discounting the fact that I totally rocked it.

Sure it was a small field (which made it possible for me to win), but I still did really well, and today, the race stats fell in my favor.

So, while I stand by believing that you are more than your stats, and age group victories do say more about the field than they say about you, it doesn’t follow that I should discount my accomplishments when they do come.

It wouldn’t have been less awesome if it was a huge field and I’d come it 45th, but it wasn’t.

I often get cravings for food during a race. It’s almost always something bad for me (read: pizza or a burger).

On my drive home today, I really wanted a salad.

You know what I’ve never had a hankering for after a run? A salad.

I had a great time – felt great, loved the course, the weather was great.

I couldn’t have asked for more.

My insane racing August concludes next week with the Santa Rosa Double Barrel Challenge – the 5k on Saturday, and then I’m pacing the 5-hour marathon group on Sunday. 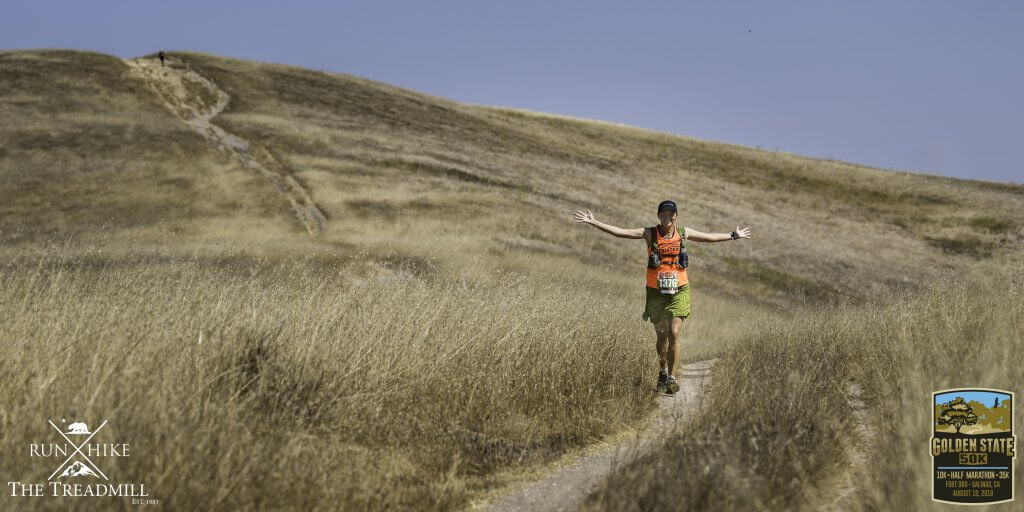 #flatsara is ready for the Golden State 35k tomorrow. Im a little nervous- its been a long time since ive done a trail race in a totally new area where i have absolutely no idea what to expect. Onward to Fort Ord! #insidetrailracing #insidetrail #goldenstatetrailrun #flatrunner

I was so matchy-matchy today (mostly unintentionally).

I knew my outfit was mostly matchy, and the fact that my hydration pack and one of my running skirts matches is coincidence, but then I got my race bib- orange and green.

A perfect match for my outfit!

Some things you just can’t plan. 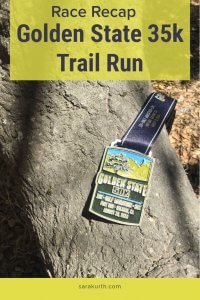