Hard Won Lessons It Only Took 20 Years To Learn

I’ve been running for a long time – nearly 20 years. One major upside to running for that long is I’ve had plenty of time to pick up on a few patterns.

Something may happen once on a run and I won’t even notice. If that thing happens again, I may have a vague sense of deja vu.

But after 20 years of that thing happening on a run, it’s no longer a random happening, it’s a pattern.

And patterns… those I can figure out and use to my advantage. 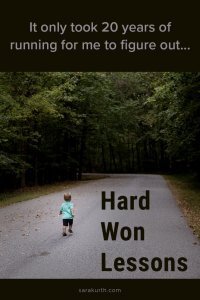 I tend to do a pretty good job carbo-loading and hydrating before a marathon.

But after downing mountains of carbs and buckets of water preparing for my first few marathons, I found myself feeling really crappy. Then I’d get scared that I had done something wrong.

If I feel like crap the day before a marathon, I’ve fueled properly.

Pre-race nerves, too many carbs, too much water, and loss of running as a stress-relief all combine leaving me feeling bloated, under-exercised, and over-stressed. It happens nearly every time.

Feeling like crap the day before a marathon has never consistently had a negative impact on my marathon performance.

Quite the contrary, an over-carbed induced blah-ness has always led to a successful marathon.

I’m About To Crash

Before I started really paying attention to proper fueling, I would often skip taking a GU or blocks when I felt like things were going well.

If I ever think: ‘Wow I feel great,’ I need to eat something immediately. I’m about to crash

I eventually noticed a pattern to my ‘I feel amazing moments’ – they were followed by a total energy crash about a half hour later.

So now I stick to a fueling schedule – with an extra GU anytime I think: ‘Wow, I feel great.’

Hills are not my favorite. But when I do a trail run, they are a necessary evil. They are the price I have to pay to reach the beautiful view from the top. 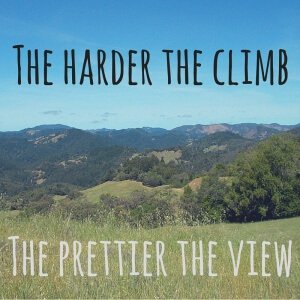 Frequently, I am tricked by fake-outs on an uphill. I think I’ve reached the top only to realize it was actually a bit of flat before the uphill continues.

When on the trail, assume I’ll keep climbing until I’ve reached the highest point around. If I can see peaks higher than me, I’m going to keep climbing.

On the rare occasion I’m wrong, it’s a pleasant surprise.

Ah, the pre-race mass of humanity that is the porta-potty line. Personally, I like the single line approach to claim your throne (more common at trail races and smaller races with fewer people). But usually, you need to pick a line.

And depending on your pre-race timing, you’ll have to pick a line a few times.

Get in the porta-potty line with the most men.

Common sense tells you to get in the shortest line, but the line with more men (even if it’s the longest) will almost always move the fastest.

It may be a stereotype, but there is science behind women taking longer in the bathroom than men.

There are always exceptions, but it will be the fastest line more times than not. 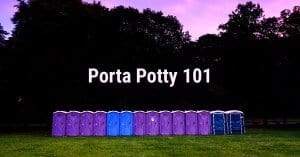 After finishing a marathon, it is sooooo tempting to find the nearest grassy knoll and curl up and take a nap.

Keep moving and keep active after crossing the marathon finish line. Stop moving at your peril.

This is a lesson I only had to learn once. After one race experience stopping and sitting too soon after finishing for too long a time, I’ll never do it again.

Now I know to keep walking. Maybe take an (easy!) bike ride around the neighborhood the afternoon after a marathon finish.

Resting immediately feels good in the moment but it gives your muscles too much time to freeze up. Sitting too soon will prolong your post-race soreness by hours, if not days. 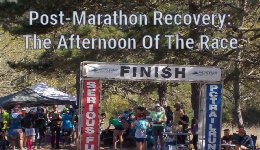 When marathon training, it seems logical that I’d want the longest long runs to be amazing, but not so much.

Long runs should be Goldilocks Runs: not too amazing, not too terrible.

If I feel great on the longest long runs, tend to get over-confident. I’ll take it too easy on the taper and the last week of race prep. I’ll assume I have it all under control and I’ll take my eye off the ball.

If that long run is terrible, I’ll get pessimistic about the event and my training. I’ll be convinced that I’m going to fail miserably and I’m a terrible runner who should have never tried in the first place.

But when the longest long runs are somewhere in the middle? I know I’m on the right track, but also that I need to stay focused on my training.

But, I’ll always take an amazing long run, too.

I’ve now run 26 (and counting) marathons. I like to think I have it down, that it’s no big deal. That I know what to expect.

When I cross the finish line of a marathon, I will tear up a little (if not flat-out cry).

Just because I know I can do it, or that I’ve done it before, doesn’t mean that it’s no longer a big deal.

Finishing a marathon requires that you dig deep and challenge yourself. That doesn’t get any less significant or meaningful.

Finishing a marathon always is, and always will be, kind of a big deal. 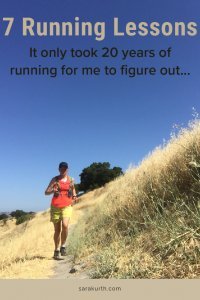