Disclosure: I was given this bottle as part of the Hidrate Spark Wellness Campaign.
The opinions are my own.

Anyone who has read my training recap posts knows I struggle with hydration.

I can never seem to drink enough water.

In the winter, it’s cool out so I don’t think of it. I’ll drink more in the summer, but it’s usually not enough to keep up with my body’s increased needs since I’m running more in warmer temperatures.

I’ve tried manual water tracking apps and gamified tracking apps but I always forget to input my water. My tracking experiments don’t last for more than a few days.

What’s a girl to do?

I’d vaguely known about the Hidrate Spark for a while, but I was really introduced to it at the recent IDEA World Expo.

The Spark is a ‘smart’ water bottle.

There is a sensor in the bottle’s top that connects to an app (because is 2018, there’s a rule somewhere that everything must connect to an app). The app tracks how much water you are drinking. If needed, you can manually add water you have at restaurants, on the run, or other times when you aren’t using the bottle.

The bottle also lights up. You can either have it flash randomly as a reminder to drink, or only flash when you are behind in your hydration goals.

If you want, you can manually set a hydration goal. Or, you can do what I did and have the Spark calculate your goal for you.

If you connect the Spark app to your Fitbit and your location data, it will determine your hydration goal, adjusting it based on your activity level and location. For example, it will increase when you are super active or when it’s hot and humid.

Ultimately, what I want to learn from my test is if the Hidrate Spark gets me to drink more water.

Here is my testing approach:

OK – here is a phrase I never thought I’d say:

The set up of this bottle seems unnecessarily complicated.

The process is actually pretty easy, but the written instructions are in desperate need of a copywriter who can slash the word count by half.

At first, I couldn’t get the bottle to pair with the app (again, that’s a new phrase for me), but with the help of the app FAQs, I was able to troubleshoot and easily fix the issue.

The first two days, I didn’t use any reminders or glowing lights. I tried to drink normally so I could tell if the Hidrate Spark helped me drink more.

Despite my best intentions, the Observer’s Law kicked in. The mere act of observing my behavior changed my behavior. Knowing that my consumption was being tracked made me drink more, even without any reminders.

While this is bad for testing purposes, it’s good for my hydration levels, so I’ll call it a win.

My first impression of the Spark app was not great.

In the first few days, the app kept crashing, losing the pairing to my Fitbit, and not recording water that I know I’d consumed. However, I was also on the road much of the time in rural areas with little phone signal and no wi-fi so I don’t know if the issue was the app, my phone, the lack of reception or just the little gremlins that randomly impact apps.

On the second day of testing, the app was again glitchy: at midday, I opened it to see that I’d reached 122% of my goal. While that was great to see, there was zero chance I was actually at 122% of my goal.

Looking into my consumption specifics, I saw many of my drinks recorded 2 or 3 times. After deleting the duplicated entries, I was brought back down to a more reasonable 60%.

My baseline results – I averaged about 66% of my daily water goal.

It’s a sad commentary that I know 66% of my optimal goal is way higher than my standard hydration would have been; I was drinking more, knowing I was being tracked.

Eventually, I turned on the light show!

I tried both light settings: ‘always remind me’ and ‘remind me only when I’m behind.’

The first time the bottle lit up, it spooked me. The light in my purple bottle flashes red. I was working on the computer when I suddenly saw this flashing red light out of the corner of my eye. It took me a few seconds to realize it wasn’t an emergency light of some sort, but my water bottle.

For some reason, I found it odd that there wasn’t a vibration along with the light. It’s not that I wanted it to vibrate, I’m just so used to having vibrating alerts on everything. It seemed odd to have a silent flashing light.

You can set how often you want glow reminders (between 2-10 times a day), but nothing more specific. I found the reminders come too infrequently to really be helpful. I wish I could set up reminders to be more specific and/or have a ‘theater mode’ so I know it won’t light up at a bad time.

How Much I Drank

Between knowing I was being tracked and the reminders, I easily hit 100% of my goal each of my ‘real’ testing days.

My hydration goal (I had the app figure my goal based on activity), has been between 80-85 ounces of water a day.

That is a lot of water!

It really illustrated to me just how far short of optimal hydration I usually fall, now that I see how much water 80+ ounces is (and how many potty breaks it results in).

Water tracking by the hour

As I mentioned, the app (at least at first) seemed super glitchy. However, it settled down as my testing went on.

The first day, it constantly crashed, and I had to repair my Fitbit three times. Neither has happened in the past four days.

I’m not technical enough to know if the app got ‘smarter’, or if it was the lack of phone signal/my traveling that threw it off at first, or if the app gremlins decided to take the week off, but it seems all better now.

The sensor and the app also seem to be getting more accurate at tracking my consumption.

There is still is some occasional double tracking. However, unlike the first few days when it double counted significant amounts (5-9 ounces a drink), the duplicate amounts are now usually .2 ounces. I’ve also noticed a pattern that the duplicated amounts occur when I refill my bottle. So I’m sure these duplications are somehow my user error in the way I’m refilling the bottle.

Even with the glitchy app, I won’t lie, I quickly became obsessed with my Hidrate Spark. (Update – after four weeks, I’m still obsessed with it.)

Maybe it’s just the novelty of it, but I found myself checking the app regularly to see where I was in relation to my goal.

Most importantly, I’ve consumed more water in the past week than I have in the last two or three weeks combined.

I finally know what it feels like to be fully hydrated (for one thing, it means way more potty breaks)!

While I expected the internal light and glow reminders to be my favorite part of the bottle, it actually hasn’t had much of an impact on my consumption.

As it is, I’ll likely disable the light show to help optimize battery life.

Just knowing my consumption is being tracked and seeing the consumption graph in the app has been more than enough to help me reach my hydration goals. 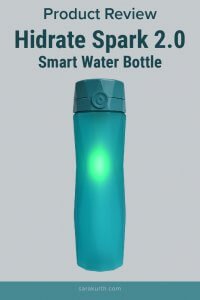