Not everything with me is running, I love all sorts of outdoor pursuits and adventures. I recently took a mini-road trip/hiking/camping adventure on California Highway 395. 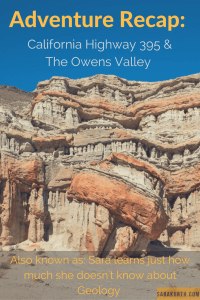 The Origins of the Highway 395 Road Trip

The idea started when I saw my favorite band, Sigur Ros, was playing the Hollywood Bowl in Los Angeles.

When looking at my travel options from the Bay Area, I noticed a large chunk of the state I’ve never really been to, east of Sierras and west of Nevada. A road trip was in order.

After a straight drive down to LA on the (the very dull) Interstate 5 and an amazing concert, the road trip really began. The plan, to the extent I had one, was a slow meander home via Highway 395 to explore the various ‘only in California’ sights that can be had just off the highway.

Here are the highlights.

Even having researched the route before I started, I had no idea this park existed. After driving for nearly an hour in generic outer LA suburbs, amazing Sierra Nevada scenery comes out of nowhere. 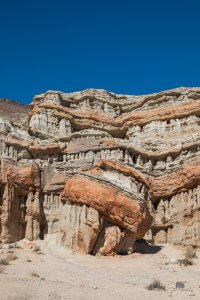 Silly me, I expected fossils. Maybe a waterfall.

But there is neither. Fossil Falls are the remnants of a long-ago waterfall meeting a long-ago lava flow. A basalt chasm and smooth obsidian rocks are an unexpected sight in the desert. Fun spot for some climbing and exploring.

When I arrived at the Alabama Hills, it was nearing noon. I was very excited to explore the area. Back in the day, the hills were the backdrop for numerous old TV westerns. The rock formations are like clouds, when you stare at them long enough you start seeing all sorts of creatures in the formations.

I was starting to get a sense of what the temperatures were going to be for the trip, well over 100 degrees.

While I had planned for warm, I hadn’t planned on shoe-melting, so a change of plan was in order. I would still explore, but stick close to the car and only hit the high points.

The most famous trail in the Alabama Hills is the Arches Loop, which ends at the famous Mobius Arch. The loop is fairly short (around 2 miles) and while I considered cutting it short due to the heat and only going to Mobius, I was itching for a walk so I did the whole loop, weighed down with many water bottles and sunscreen.

The Arches Loop did not disappoint, but it is popular. It is hard to get a picture of the arch without someone posing in it, even in the off-season. I had to wait in line for my photo-op, which of course then ruined the photo for everyone else.

I hate graffiti, but i’ll admit this made me laugh

Me at Mobius Arch

I will have to make it back to this area sometime when the temperatures are more reasonable. I could easily spend hours here. 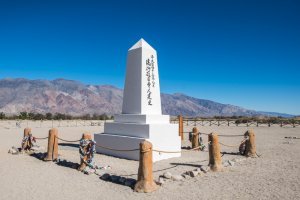 Being a lover of history, I had to stop at the Manzanar Camp.

Manzanar was a relocation camp for Japanese Americans in WWII. The only building that survives is the auditorium, which has been turned into an amazing little museum.

Beyond that, all that is left are foundations of the housing blocks, some of the cemetery markers and a few guard towers. A driving tour provides a sobering view of the size of the camp and an idea of how inhospitable the environment is.

Trips like this make me wish I knew more about geology.

Fossil Falls, Alabama Hills and the Devils Postpile are all geologic wonders and are all completely different, and I don’t understand the science behind any of them.

The postpile contains octagonal columns, perfectly formed. How? I don’t know. I read all of the informational signs (I always do), and I still don’t get why nature decided on a consistent 120 degrees to crack the stone. The pile was smaller than I expected, but still a fun little hike, including a side trip trail to the top of the formation. 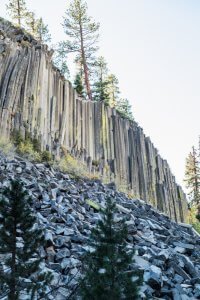 I had never heard the term ‘tufa’ before, but it has now entered my vocabulary as one of my favorite words.

Tufas are the spires formed by mineral deposits combining with the super-high salinity water. The lake is apparently more salty than the ocean or the Dead Sea. There are beaches on the lake where you can float on the lake.  I passed- the shore is thick with alkali flies.

I’m a total sucker for this kind of stuff.

In the late 1960s, the California state park system bought an old ghost town and maintain the structures as they were from the mining boomtown days. There are still bottles in the apothecary windows and books in the schoolhouse.

Being me, of course I hiked to the cemetery.

I love visiting old cemeteries and I love ghost towns, so a cemetery in a ghost town? No brainer.

I left wanting to re-watch Deadwood, I was continually thinking about the show while wandering around.

Overall I had a great time even though my outdoor plans were stymied a bit by the weather.

I was still able to see most of the amazing things I’d heard about. A little sightseeing, some hiking, a little bit of camping? Can’t beat it.

My only regret? I stopped at Copper Top BBQ in Big Pine for lunch (it was amazing). It was only when I was nearly finished with my pulled pork sandwich that I remembered I could have asked for a scoop of cole slaw to top it off.

Should I go back and order a second one? Tempting (but I didn’t).

Oh well, I’ll have to go back.