A few years ago, I was pacing the Sutter Buttes Half Marathon. During the race, I ran with a woman running her first half marathon – she had only recently started running after having kids.

We got to talking about one of her kids’ favorite books: Mike Mulligan and His Steam Shovel, by Virginia Lee Burton.

They were once the best diggers in the county, but had been bested by newer and more powerful diggers.

Mike hears a local town was building a new town hall and needed a new cellar. He decides to show the town he’s still the best by excavating the cellar in a single day.

The town agrees, on one condition – they had to dig the hole in one day or they wouldn’t get paid.

Mike and Mary Anne start to dig. They dig and dig and…

They finish the cellar only to realize they forgot to include a way to get themselves out of the hole. Mary Anne was stuck.

After some hemming and hawing, a boy suggests they leave Mary Anne in the cellar and build the town hall around her, using her as the boiler and hiring Mike as the town hall’s janitor.

I can’t remember how or why we got talking about Mike Mulligan on that run.

It arose organically from our conversation, but what specifically sparked this story as an analogy is lost to me.

There are many possible morals to the story. Mike sticking with Mary Anne (even when ‘better’ alternatives were available). The dangers or fears of new technology. The failure to foresee future potential dangers. Creative problem solving. I could go on.

The planner and risk manager in me focuses on reviewing scenarios to prevent getting stuck in a hole in the first place (literally or figuratively).

And This Has To Do With Running Because…?

So what does any of that have to do with running?

This is, after all, a running blog, not a ‘Sara reviews 80-year-old kids’ books’ blog (although this isn’t the first time I’ve reviewed 80-year-old-books).

Admittedly, not much, other than I first heard the story on the run (or was reminded of it on the run. I don’t recall reading the book as a kid, but as an avid reader, I’m sure I had my hands on it at some point). But if I have any skill in the world, it’s my ability to connect any two things if I ponder it enough, so stick with me here.

This story has popped into my head several times in the past few weeks.

It’s pretty easy to consider this story depressing. They set to work to prove themselves still relevant, didn’t plan ahead, and got stuck in a hole.

But there is a much more optimistic view of the story.

Sure, Mike initially wanted to prove something by digging the hole in a single day and if you only consider that initial goal, the day was a total disaster.

But in the end, he and Mary Anne could retire from hard labor. Mary Anne was out of the elements and provided warmth as the town hall’s boiler.

Mike worked in the town hall and Mrs. McGillicuddy brought him hot pies to eat.

Let Go Of What You Expected

Bad things will happen on the run.

You will have bad runs. You’ll go out for a trail run and get lost, get injured, or wear the wrong clothes and get chafed to high heaven.

Sure, it wasn’t the outcome you wanted.

That doesn’t mean it was a waste of your time or that it would have been better if you’d stayed home.

View events in a different way.

Let go of what you expected and embrace what is.

It Won’t Always Be Ideal

We don’t always get what we want.

Use your terrible run with the chafing pants from hell to improve your running gear to clothing that better suits you.

Maybe you got lost on your trail run, but take a moment to appreciate the beautiful waterfall you would have never seen if you didn’t get lost.

Maybe you hoped for a race-day PR, but those hopes are dashed when race day arrives in the midst of a heat wave. Sure, it wasn’t the day you’d been dreaming about, but instead of focusing on your lost PR dreams, enjoy the on-course entertainment and spectators you otherwise would have had to ignore.

Or a few real examples:

A few years ago, amid a very running-heavy season, I broke my foot and was in a walking boot for a month. My doctor made me stop running. It was as ‘stuck in a hole’ moment as I’ve ever had. However, even it had a silver lining. In retrospect, I was pushing myself too hard and being forced to stop was the best thing for me.

A few weeks ago, one of the ladies in the pace group I usually run with fell. No one in the group had a band-aid (I, risk manager I am, run with a small first aid pack, but I wasn’t with them that day). A few weeks later, another member of our group fell. This time, nearly everyone in the group pulled out band-aids.

It wasn’t what we wanted to happen (no one ever wants to fall) but it is what happened. We collectively could (and did) become better and more prepared runners.

How can you view events in a different way? 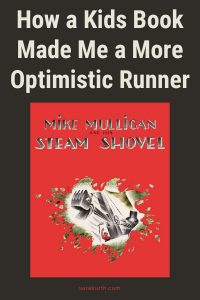