I recently celebrated the 20th anniversary of my first marathon, which has led me to reminiscing about all the ways that running that first marathon was different from my last big endurance race – the Oregon Coast 50k which was marathon #29 (if I lump marathons and ultramarathons together in my race log, which I do)

Twenty years ago, carrying your own water was a wacky idea, mid-run selfies were definitely not a thing and you could register for major races without lotteries. Imagine it – you just fill out a (paper!) registration form, send in a check, and you were registered for the Big Sur Marathon!

How crazy is that?

How My 29th Marathon Was Different Than My First

For as much as running technology has changed in twenty years, I’ve changed more. 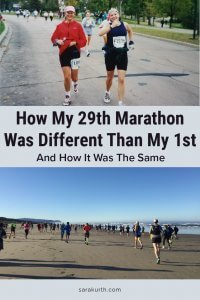 I Know What To Worry About

I’d love to say I don’t worry about the upcoming race in those final days now, but I still do. I’m an overthinker and always will be. The difference is, now I know better what to worry about.

Before marathon #1, I worried about every aspect of everything.

I know that any of my collection of Injinji socks will be great on race day.

Which pair of pants do I wear? Now that I have to worry about. Non-chafing pants remain elusive.

I Know Trusted Gear Can Turn On You On Race Day

On a related note, I’ve come to learn (and grudgingly accept) that even the most tried-and-true piece of gear can turn on you on race day.

More than once, a beloved shirt, which has never once caused so much as an itch during hundreds of miles of training runs, caused MAJOR chafing on race day.

But I also know it can’t be predicted or prevented.

I’m Ready For The Carb-Load Crappiness

Before my first few marathons, I’d hydrate and carbo-load in the days before the race, and I would end up feeling like crap.

I would then start to worry – I’m running a marathon tomorrow, but I feel fat, bloated and like I don’t want to walk to the end of the block – let alone run a marathon. That can’t be right!

After noticing it happened every single time, I came to realize: if I feel like crap the night before race day, I’ve done it right.

It’s a simple equation: too much water + too many carbs X not having running for stress relief + pre-race stress = feeling like crap. 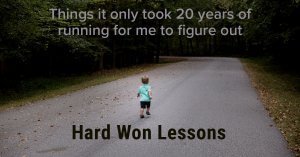 For my first few marathons, I’d obsessively check the weather, starting weeks before race day. If there was a rain cloud or heat wave in the forecast, I’d start to worry.

I still check the weather before race day, but it’s only so I can adjust my packing list accordingly

What Has Not Changed

The more things change, the more they stay the same…

I Get Worked Up At Big Race Expos

These days, I mostly do smaller trail marathons without expos. Races where you just show up on race day and pick up your bib. For me, this is a good thing since I always seem to work myself up at marathon expos.

There’s just something about the nervous energy of marathon expos that messes with my head. The overconfidence of some runners, the fear of others. Overhearing other’s conversations always leaves me thinking about the things I didn’t do in training (but should have).

I still nervously eye the cut-off times in the days before race day.

For 20 years I’ve been running marathons at a pace well-faster than cutoff times. It’s never been close to being an issue. And yet, in the days before a race, the little devil on my shoulder will try to convince me that this is going to be the race where I can’t finish.

I know this is an utterly irrational concern. It even crosses my mind when I’m doing a trail marathon held at the same time as an ultramarathon (meaning the cutoff time is often over 9 hours).

If anything, this fear has gotten stronger since I’ve started doing recaps for this blog. Now I think ‘what if I can’t finish this time? I’ll have to write a recap for the world to see…’

Ah… the joys of an overactive imagination.

What about you? Have you learned anything the more marathons you run?