The main measure of objective success for races is speed.

Awards are given out for overall winners and usually age group winners, always judged by speed. This always puts me in a bit of quandary since I’m not fast. ‘Getting faster’ has never been my main running goal.

I judge my success at a race based on the measures and goals I established for myself before I started, comparing my finishing time to what I wanted to do or what I thought I could do. How that measures up to the random strangers on the same course at the same time doesn’t inspire me.

However, I do have one age group win in my running career. And unless I’m still running and racing when I’m in my 90s, it is likely to be my only age group win. (2018 update: I’ve won a few age group awards since, mostly in super small trail races, but Lagoon Valley still stands out).

The story of how that win came into being made it the most appropriate win that I could possibly have.

Lagoon Valley: Running in a Typhoon

I was doing a trail half marathon at Lagoon Valley Park in Vacaville, about an hour outside of the Bay Area. It is an interesting course, it does four different loops roughly in a cloverleaf pattern, each loop coming into the start area and then heading out in a new direction.

It was a bit drizzly and chilly at the start. Nothing unreasonable, just enough to make a trail run interesting, but not too terrible.

Little did I know…

The fastest runners started (like they do) in shorts and tank tops. I went out (like I do in bad weather) with my windbreaker, hat, stretch gloves, and a Buff

to cover my ears.

When I was about a third of the way through the course, the sky opened up and unleashed holy hell. Rain, hail, wind. I’ve written about this before – it was the worst weather I have ever been outside in.

But I did what I do: I covered my ears, put my hood up, and kept going, spending the better part of the next hour and a half swearing under my breath (and not-so-under my breath) and thinking: this can’t get any worse, can it?

Never ask yourself that question on a trail race, especially during inclement weather. It can always get worse. During the last loop, I took my bib number off before the wind and hail ripped it off.

I finished freezing and soaked to the bone. The race organizers had pretty much dismantled the start/finish area. The wind had blown down the inflatable finishers arch, and some of the tents were being blown over. The PA system had been turned off. I barely stopped at the food table before high-tailing it to my car to try and warm up.

Me? Not stopping to grab food? It must have been bad.

The Age Group Win Does Not Always Go to the Swift

In checking the race results later, I found out I won my age group.

There were plenty of faster runners at the start, so speed was clearly not the key to this victory.

Here’s the best that I can figure: The fast runners (who were mostly in shorts remember), all dropped out when the course looped back near the start area after the weather turned foul.

I was the first runner in my age group that didn’t drop out.

Like I do, I kept my head down, my hood up and kept plodding along until it was done.

This is the most appropriate win that I can imagine for myself. Being fast, while I’m sure a great thing (I wouldn’t really know), isn’t something that inspires me.

I am, however, inspired by persistence. By pushing myself and what I think I can accomplish, and by not giving up.

The year I got the award was the year I got a terrible calf cramp at mile 26, just as we headed into the finishers chute. I immediately thought of the old Wide World of Sports intro: the agony of defeat with the visual of the ski jumper falling on his face. I was going to finish, even if I had to hop across the finish line. After I finished, I looked so happy and so relieved it apparently was prize-worthy.

So for the second time, my sheer bull-headedness and persistence resulted in a prize.

What Do You Value?

Every runner values something different. Many runners aspire to be fast. If that gets you up and out of bed to go for a run, great, work with that.

But for me? Being awarded for my persistence and bull-headedness? Perfect. 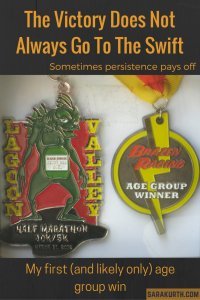