During a recent recap post for my Oregon Coast 50k training, I noticed that while I run my scheduled run nearly every time (skipping maybe 2 runs every 4-5 month training cycle), my success rate, that very same week, in completing my planned strength work hovers around zero.

How can I do one workout so religiously, and skip another with almost the same level of dedication? 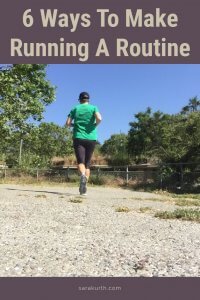 Here’s what I eventually realized: for me, running is a habit, it’s part of my daily routine. I never think: ‘should I run?’, ‘do I want to run?’ or ‘how far do I want to run today?’

I have a plan and a schedule. I wake up on Tuesday, I run. Saturday? I run.

It’s all on auto-pilot.

I may dawdle a bit and procrastinate with the occasional ‘I don’t wannas,’ but ultimately, it feels odd to not run.

Strength work (when it’s done) is done solely out of willpower and by good intentions, on a case-by-case basis.

I’ll ask myself, ‘do I feel like doing lunges and squats today?’ The answer is usually ‘not really.’ And if I don’t feel like it, chances are, I won’t do it.

It’s not a habit, it’s not a routine, it feels no different to me if I do it or not.

Creating a solid running routine can make all the difference for your running.

When your running is a routine, you won’t think about going for a run, you’ll just do it.

Here are a few suggestions on how to make running a routine.

Make It Realistic and Sustainable

A big part of building a routine is doing the thing regularly. So make sure your running schedule is something you can do regularly. Maybe it sounds great to plan on running every single day, but that is likely too much to take on as you start.

Consider how and when running will fit into your life.

If you can only commit to regularly running once or twice a week, start there. Build a solid habit of running twice a week.

Then, if you can, add in a third day.

The right number of times you should run per week is whatever you can do on a sustained and regular basis.

In order to build a routine, it is key that you build a plan and then see that plan through without renegotiating with yourself.

If you don’t follow your plan (for whatever reason), and constantly renegotiate with yourself what you should be doing, you’ll never build a running routine.

On Wednesdays, We Wear Pink

A big part of building a successful running routine is doing the same types of workouts, at roughly the same time, on the same day.

When your body and your mind adapt to a consistent schedule, it will begin to feel odd to not do the run at that time, strengthening your running habit.

For me, Saturdays are long runs. My whole day feels off-kilter if I don’t do my long run on Saturday.

In this narrow exception (to build a running habit), I’ll advise the opposite- don’t question it.

Build In An Out

I don’t want to renegotiate the deal with myself (“well, it’s OK if I skip class today because…”), but I also know I’ll be miserable if the sub is bad. So what to do?

I planned ahead, and built in an out.

Think ahead to the conditions you know aren’t good for your state of mind. These will be personal to you – really hot, really humid temps, substitute yoga teachers, whatever. Consider (again, in advance!) when you’ll allow yourself to not do the run you have on the schedule and what you will do instead (for example, ‘if it’s over XX% humidity, I’ll skip my outdoor run, but I’ll do a cardio class at the – air-conditioned – gym’).

When those conditions arise, invoke your exception, and do your alternate activity.

This way, you can avoid your negative circumstances, and still not have to renegotiate your deal, because the exception was built into the plan from the beginning. 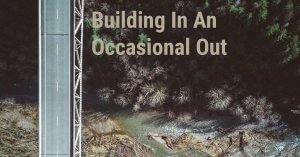 I hate to break this to you, but there will be days when you don’t do the run you had planned. Maybe your calendar got ahead of you, or your kid’s flu bug made it impossible to get out the door.

You will not be without failed attempts at habit building.

But don’t think about it as all or nothing. If you missed Tuesday’s run, it can be tempting to think ‘I may as well give myself a pass and not run the rest of the week. I’ll regroup next week on Monday’.

Each day is a clean slate. Regroup the very next day and get right back to it.

What about you? Did you make running a routine? If so, how? 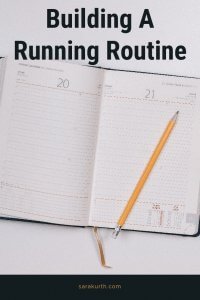