I was recently working at the pacer information booth at a marathon expo. I love marathon expos. Talking to runners, soaking up the pre-race energy and discussing the different ways people handle marathon preparation. Many runners, especially first-timers, feel like they are underprepared. After talking to them, I find most are more prepared than they think.

One guy passing by the booth this year was the exact opposite. He was the model of under-prepared and over-confident. During the first part of our conversation, I thought he was joking. I thought we were doing a little improv routine with the topic being ‘worst-case marathon preparation.’ It slowly dawned on me he was serious.

It didn’t occur to me to get his name or bib number, so I wasn’t able to follow-up and see if he finished. He broke every bit of conventional wisdom for marathon training, but maybe he still rocked it.

I doubt it, but can’t say for sure either way.

For the purpose of this article, I’ll call him Donny Don’t. Any other old-school Simpsons fans out there? Bart joins the faux-boy scouts and gets a guide on knife safety. He is confused by the admonition: Don’t Do What Donny Don’t Does. Check it out immediately if you haven’t seen it.

What Donny Don’t Did: Examples of BAD Marathon Preparation 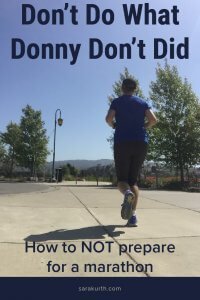 His Longest Run Was Only 13 Miles

Donny said he felt pretty good during his 13 mile run the week before. I thought he was talking about just another training run. I later came to find out that it was his longest run ever.

The common wisdom, which I have always followed, is that your longest run during marathon training should be 20 miles. I think there is a huge mental boost that comes from hitting a mile marker that starts with a ‘2’ in training. 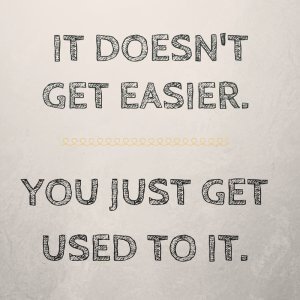 There are other training philosophies that say you don’t need to do 20 miles. For example, the [amazon_textlink asin=’1937715485′ text=’Hansons Method ‘ template=’ProductLink’ store=’sarakurth-20′ marketplace=’US’ link_id=’a9acc643-d955-11e8-b804-0b551b5aae26′]generally tops out at 16 miles, with a greater focus on the time on your feet over longer mileage. I’ve never used this method, but several friends have and have done well with it.

In any case, it was clear to me Donny hadn’t topped out at 13 miles because of a low mileage training philosophy, but because he just never got around to, or didn’t want to, do anything longer.

Use a reputable training plan that has long runs of increasing duration so you have experience running for times equivalent to your marathon time. That can be based solely on time or on mileage, but in any case, it should be longer than 13 miles.

His Longest Run Was The Week Prior To The Marathon

Donny had done his longest run (13 miles) the week before the marathon.

Now, granted, his mileage wasn’t long enough to require a full-on taper, but his body and muscles were as taxed as they had ever been just that week, they were in active recovery mode when they should have been replenishing.

The mileage in the two (or so) weeks before the marathon you should be in a taper. The taper lets your body recover and replenish for the event to come.

He Never Fueled During A Run Or Taken Water On Runs

Donny had never even heard of gels for fuel. He had never tried any type of fueling during a run. He’d only used the water fountains that he came across on this runs.

This is another direct result of his ultra-super-unintentionally low mileage approach. Your replenishment needs are minimal doing shorter runs. But for a full marathon, you need some type of fuel.

Without trying anything out ahead of time, who knows what his body would do when he tried eating on the run.

You have to stay fueled up and energized to stay strong during a marathon, and that requires some source of energy. You can buy pre-packaged gels/blocks or make your own stuff, but you need something.

Long runs are the perfect time to try out a few options. See what works, what your stomach likes, and what brings you a burst of energy.

I also always recommend carrying some water as well, even on the shortest of runs. Relying on public fountains can be an iffy proposition at best: the ones near me always seem to be broken or are turned off due to drought.

He Knew Nothing of Chafing

Part of the long run experience is knowing what to expect, preparing and trying to minimize the negative impacts.

Doing a marathon isn’t a thing you just show up for on the event day. Training, especially long runs, is a critical part of marathon preparation. 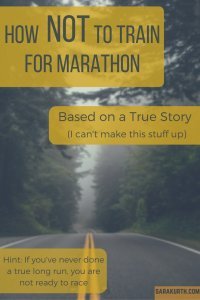