My plan was so simple.

I knew I was going to be in Minnesota in August visiting my family, so I figured since I’m training for an ultra and would have to run anyway, I may as well-register for a race. It makes it a little more fun and it also makes it easier on me since I wouldn’t have to remember my Minnesota long run routes (it’s been 20 years since I’ve had to find a 10+ mile route in Minneapolis).

A quick google search found the Mendota Bottoms 10 mile trail race. The race was going to be on the trails at Fort Snelling State Park, right near the Minneapolis St. Paul airport.

Um… Not So Much With The Trail…

A few weeks before race day, I got an email saying that due to storm damage to the original course, the race was being moved to a nearby ‘urban trail’ (a/k/a paved bike trail) pending permit approval.

Not nearly as exciting, but it did make racecation packing easier. I’d been debating how to pack. Should I bring my road shoes (for other training runs) and trail shoes (for the race)? That seemed excessive, but I knew the trail could be sloppy due to the wet summer weather Minnesota has had this year. I didn’t want to potentially ruin my road shoes in sloppy conditions.

With the course now paved, it made my decision so much easier.

As race day neared, I started to get nervous. The last I’d heard was that the permits were pending. As of 5 PM the night before the race, I still hadn’t heard anything. Was the race on?

I had to assume no news was good news, but a pre-race email of some sort would have been nice with, I don’t know, a course map?

What Are The Odds?

I’ve now done 3 trail races in Minnesota. None of those races have happened as scheduled on the planned route.

Considering I’ve only had one other race be rescheduled or moved (The Death Valley Trail Marathon- cancelled due to cold) in my running life, the fact I’m 0 for 3 with Minnesota trial runs is odd.

I don’t have one.

This race is as low-key for me as it’s possible to get. I’m on vacation and out of my usual running/pre-race routines.

I had no idea what to expect, how big of race it was, how well marked it was, or how well-marked it needed to be given the relocation to a bike trail. 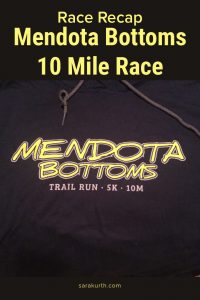 The best part of doing races when I’m home is I have my parents as race sherpas. I didn’t have to worry about driving or parking. They would hold my extra layer that I wanted to wear as I stood around, but that I didn’t want to run in.

As I realized when driving down to Santa Cruz a few weeks ago, nearly all of my pre-race nerves are related to potential driving and parking issues. When someone else is driving (and parking!) none of that is an issue.

Mendota Bottoms was a super small race. Maybe 200 people, most of whom were doing the 5k (there were only 69 10 mile finishers).

I’m used to doing small trail races, but even for me this was a super small race.

Sure it was a small crowd, but they only had 3 porta-potties.

That seemed a little skimpy, even for a small race.

The relocated course ran the full length of a 4.5 mile long trail. The start of the race was near the midpoint of the trail, and did two out-and-backs (one in each direction), with a little dogleg side trip to make up the mileage.

One direction was pretty, but fairly generic. Lots of trees and greenery, but no real view to speak of.

The second out and back was by far the more exciting. It ran by several scenic overlooks of the confluence of the Minnesota and Mississippi Rivers on one side and bluffs on the other.

I know the Brazen-style aid station feasts (water, electrolytes, Payday bars, GU, chips, Jelly Bellys, and at least a dozen other foods) is not the norm, but it has been a long time since I’ve done a race that only had water at aid stations. Even so, the volunteers were super nice (this is the land of Minnesota nice, after all).

Like Santa Cruz a few weeks ago, this was another race where I legit forgot I was doing a race a few times.

But unlike Santa Cruz, where it was due more to my mindset and lack of focus, here it was more because I was out of eye sight of other runners for long stretches – there just wasn’t anyone else around.

I just felt like I was out running on a paved bike trail for a Saturday long run.

There has been an unexpected trend with my August of races – every weekend race has resulted in me focusing on a different sense.

Santa Cruz was all about the smells (the redwoods smell amazing on a summer morning).

Bear Creek was all about the sights from the ridge.

Mendota Bottoms was all about the sound. Much of the trail is directly under the flight path of the MSP airport (the airport is just across the river) so there was the regular roar of planes landing and taking off. I would have expected that to be annoying, but it was kinda fun since the planes were so close (so close you can see people in the plane windows). Crickets and other night/ early morning critters were also out in force, so there was a constant insect orchestra just off the path.

One of the race sponsors was Anderson’s Pure Fuel. Maple Syrup packaged as race gel. They had representatives at the race and were very generous handing out product.

I’ve heard of several maple-based fuels, but have never tried any of them. This one isn’t just maple based, it’s straight-up maple syrup. The nutrition looks very comparable to other fuels and I’m curious to try it.

Even if I don’t like it as a fuel, I figure I can use them on pancakes.

The odds of me being in Minnesota when this race is run again isn’t very high, but if the opportunity presented itself, I would like to see what the actual course is like.

The area is really pretty, and I’d like it explore it more when the trails are repaired (added bonus that part of the entry fee goes to trail rehab).

My running-a-race-every-weekend-in-August streak concludes as I pace the 4:40 group at the Santa Rosa Marathon

#flatsara paired-down travel edition! #augustisforracing (a/k/a running a race every weekend in August) continues tomorrow with the Mendota Bottoms 10 miler. The race was re-routed this week due to damage to the original trail, so its now on a paved bike trail instead of the original dirt trails. Not what i was hoping for, but it did make racecation packing easier. #mendotabottomstrailrun #flatrunner #chafingthedream