There is an endless supply of advice on how to be a runner and on marathon training. More tips, tricks, lists of dos and don’ts and best practices than you could ever process.

What I love about marathons is they are open to everyone.

But the process of getting to the start line is (and should be) unique to each runner. The training tips and advice for experienced veterans striving for an age group win will barely resemble the tips appropriate for a first-timer just hoping to finish.

I’ve recently read a number of these ‘how to prepare for a marathon’ lists and encountered more than a little fear mongering. I’ve run dozens of marathons, and I like to think I’ve learned a few things in the process. I for sure know what to expect. Even so, some of these lists make me a little nervous about training.

If you, like me, are a mere mortal (not a marathon master) there are a few things you really don’t need to worry about while training for a marathon. 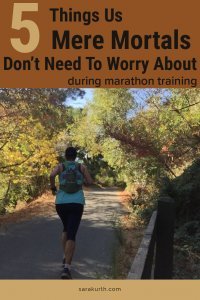 You’ll get sick, you’ll have an unforeseen business trip. There will come a day when everything goes wrong and you just can’t get your run in.

Training plans are just that, plans. All plans are subject to change.

If you can rearrange your training days and still get your run in, great. Do so. But if you can’t, the day is gone. Let it go.

That said, you shouldn’t make skipping runs a habit. Skipping a run feels a little easier every time you do it. Best to not head down that slippery slope.

But your training won’t be significantly impacted by missing a day here or there.

If you are trying to PR or qualify for Boston, you really should hit the track. But if you are a runner just looking to finish happy, healthy, and strong, don’t fret about skipping it.

That said, if you are avoiding the track because it’s hard or you are intimidated by it, I’d encourage you to face your fear and give it a shot. But if the track just isn’t your thing (as it isn’t for me), the running world will continue to turn if you don’t run around in circles on a Tuesday night.

And especially for newer runners and marathoners who aren’t concerned about being fast, the benefits often aren’t outweighed by the increased risk of injury.

Your long runs will play a much larger role in your marathon success than track or speed work anyway. Focus on mastering that first, the track can wait.

Finding (or following) The ‘Perfect Diet’

I am not a nutritionist so take this with an appropriate level of skepticism, but there is no such thing as a perfect diet.

You can find an article or a study supporting just about any nutritional belief you want. I’m sure if I looked hard enough I could find a study to support my (more common than I should admit) diet of pizza and cupcakes.

Pay attention to basic nutritional advice – minimize processed food and added sugar, eat fresh fruits and whole grains. But don’t obsess about every ounce of food or your exact intake ratio of carbs to proteins as an everyday practice.

The right diet for you and your running is unique to you – it’s whatever keeps you healthy and feeling energized. If your day before a long run dinner is utterly non-traditional, but it keeps you powered up for 20+ miles, it is the right choice for you.

My go-to day before a long run meal is a rice and black bean burrito, even though beans are on many ‘don’t eat’ lists (due to the fiber content in the beans). But it works for me, so I’ll go with it.

Even us mere mortals don’t need to worry about finishing last. You won’t.

And if you do, the world won’t end. I know this first hand.

I’ve finished last, and the world continued to turn. 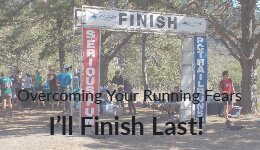 How the Elites Train

While I love reading about the training regimens of elite runners and marathoners as much as the next girl, it is important to recognize that elites are entirely different beings than us mortals.

Training is their job. They have teams of coaches putting together highly tailored plans specific to their abilities and weakness.

Their methods aren’t suitable, appropriate, or realistic for us mere mortals. Just because you read that so-and-so elite trains 100 miles a week, does 3x/day workouts, or eats a diet that is 100% sprouted wheat germ, doesn’t mean that’s advisable, or even possible, for you.

Read about their training regimens if you like, but for us mere mortals, it is only relevant as a curiosity.

Not as a suggestion, guidance, or how-to.

What about you? What advice have you heard that most runners don’t have to worry about? 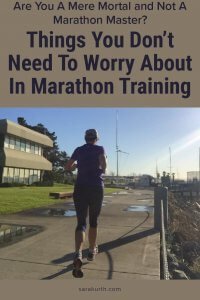