ABT: Always Be Training

People are often amazed when they find out I usually run two marathons a year, one in the spring and one in the fall.

The non-runners just think I’m crazy. The runners often say that one marathon a year is exhausting and time-consuming enough.

They are right, of course. Training for and running a marathon is exhausting and time-consuming.

But I find it easier to run two a year for one simple reason:

It’s easier to stay in shape than it is to get in shape. 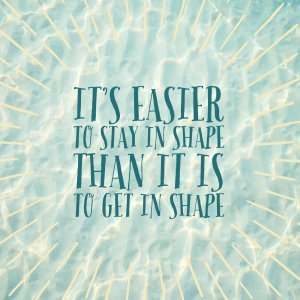 Why Two Can Be Easier Than One

I can’t find the exact right word for this heading. Running multiple marathons a year can’t really be described as ‘easy,’ but it’s the word I keep coming back to, so I’ll go with it.

There are several reasons that running multiple marathons a year works for me, and why you should consider a multiple-race-a-year training calendar (of any distance). 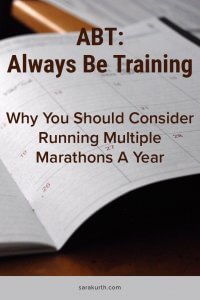 When I run a single marathon a year, I’ll have nearly seven months in non-marathon mode. In those months, I slowly lose all the fitness and endurance I’ve gained while marathon training.

After all that time not training, when I start back into it, I feel like I’m starting from zero.

Even when I’ve kept running regularly, I feel like I’ve never done it before. I’ve lost so much of the endurance and stamina required for marathon training. It takes weeks for me to feel like I’m remotely capable of distance running.

However, when I run multiple marathons a year, I don’t lose too much fitness. I still take some time off, but the shorter rest period only requires a run or two to shake out the cobwebs.

The Right Amount Of Time Off

My marathon training program is 18 weeks long. Doing two training cycles a year leaves roughly two months for rest and recovery. Two months off from marathon-mode is, for me, the perfect amount of time off.

It gives me time to recover, revisit other hobbies, focus on my non-running life for a bit or volunteer at a few races and earn some running karma.

Two months is also the right amount of time for me to rebuild my excitement of running. It’s pretty common for me to burn out a little during marathon training. ‘I’m ready for it to be done’ is a common refrain for me in the last weeks of training.

But after a few months in non-training mode, selective amnesia has set in. I remember the good times and the upsides of training, but have (conveniently) forgotten the bad times.

A big part of my marathon training success is building good habits and routines around my running. Having a plan and sticking to it.

When I train for multiple marathons a year, I can more easily keep those habits in place. I get used to waking up and going for a run. I don’t think about it, I don’t consider if I want to, I just do.

But when I do ‘only’ one marathon a year, I start to get lazy.

I remember how nice it feels to sleep in on Saturdays and do shorter runs (or occasionally bail) on rainy days.

I’m terrible about keeping discipline with my running when I’m not in training for something. When I’m out of training mode for too long, starting up again means that I need to not only re-learn and re-form the good habits, but I have to break the bad ones.

It never gets easier to wake up early on a Saturday morning to do a 20-mile long run. 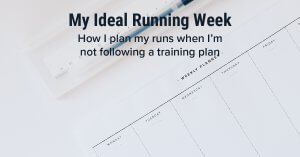 Keep Up The Momentum

For me, marathon training involves leveraging momentum. Momentum is partly the physical part of running, partly habits, and partly a mental mindset and dedication.

Starting training requires that I re-build momentum. I need to physically get in shape and build habits, but also I need to get into the marathon training mindset and dedicate psychic energy to training.

Just like re-building habits and my level of fitness, restarting momentum after only a month or two off is pretty straightforward. I have a running start (as it were).

But after seven or eight months off? I have absolutely no momentum. I’m starting from zero.

What This Means For You

But the lessons and ideas apply to training for multiple races of any distance, not just marathons.

Running multiple half marathons or 10ks a year would provide the same benefits, keeping good habits in place and staying in training shape.

Just be sure to have a little time off from training. Always training can lead to burn-out.

What about you? Have you ever done multiple marathons in a year?