I love trail running. Being out in nature, seeing the sights you can only see via your own two feet. I live in the Bay Area, and the sheer variety of what surrounds me never ceases to amaze me. Within an hours drive, there are mountains and oceans, redwood forests and wide-open prairies.

If you plan it right, you can get to all of it in a single run.

But there are dangers to be had. No matter how much I try, a few things strike fear in my heart.

‘Enemies’ may be a little strong, but I’ll go with it.

My Enemies In Nature 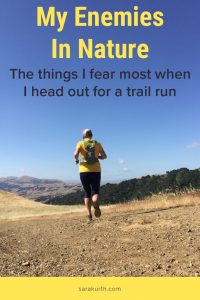 If I even look at poison oak, I start to get itchy.

Both California State and East Bay Regional Parks are THICK with poison oak. The parks usually do a pretty good job cutting it back on the more popular trails, but if I’m running on smaller and/or narrower single track trails (as I am apt to do), avoiding it can be tough.

The leaves turn bright red in the fall, so it’s easier to avoid. But it’s downright dangerous in winter when the leafless stalks can still cause a rash (I learned that the hard way).

After pretty much any trail run, I rub myself down with Tecnu (even if I didn’t see any poison oak – I can’t be too careful).

But even with the best scrub down, every few weeks, I’ll start to get a little tell-tale itch on my leg.

I know the full-on itch-and-ooze of poison oak will soon arrive.

Like Indiana Jones and so many others, I hate snakes. They way they move… it’s just not right.

But they are a reality of trail running, so I’ve actually been working pretty hard to learn the types of snakes I could encounter on my runs. I need to know if what I’m crossing paths with is venomous.

The exposure therapy of looking at the ‘Common Snakes Of The East Bay Regional Park District’ brochure has helped allay my fear a little bit.

However, every time I actually run into a snake on the trail, my natural instinct is to jump away and let out an embarrassing little squeal. By the time I’ve come to my senses, the snake has slithered away. I never even had a chance to try and identify it!

While I’m glad it’s no longer around me, just once I’d like to be able to test out my new-found identification skills (assuming it is a totally harmless snake, that is). 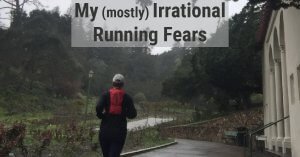 Anything I Can Mistake For A Snake

I realize this one isn’t really fair to nature, but still…

On a list of things in nature that cause me angst, branches, roots, twigs or anything else that look like snakes at first glance have to make the list.

If I’m out on the trail and I spot something, most often it’s a split second glance out of the corner of my eye.

In that brief moment, I can’t tell the difference between an obviously harmless stick, a harmless snake, and a dangerous snake.

More than once I’ve let out a little snaking-spotting squeal when I’m only in the presence of a tree root.

Pretty yellow leaves hanging from a tree in the fall is a beautiful scene.

But once they are on the ground, they can be a menace.

Piles of leaves can hide a multitude of dangers (rocks, tree roots, banana slugs). They can get super slippery when damp – even if there hasn’t been any rain or frost.

When combined with the lower angle of the sun, or the sun shining through bare branches in winter, the various colored leaves on the trail can create a kind of camouflage, messing with my depth perception, making it hard to run. 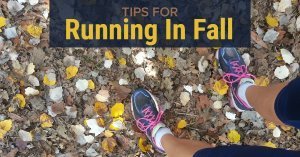 One of the main reasons I enjoy trail running is getting out in nature.

Nothing takes me out of my trail runner happy place faster than coming across a big group of people.

Now, I’m not a total hermit – usually, these people are totally fine. Another solo trail runner? Great. A couple out for a hike? Lovely.

But occasionally its a much larger group, or disrespectful folks who leave noise and litter in their wake. Boy scout troops. Large college hiking clubs. At a trail race, there is the group I always seem to get stuck near that NEVER stop talking.

There are the dog owners whose dogs are totally out of control. Who don’t understand ‘off-leash under voice command’ requires you at least make an attempt to control your dog or who bag their dog’s waste and then just throw the bag by the side of the trail (excuse my skepticism that you’ll ‘pick it up as you come back after your walk’)

OK, maybe I should be a hermit…

While sun is generally preferable to rain on the trail, a super sunny run = sunburn.

I can apply and re-apply sunscreen all day.

I can wear my super-sexy neck protector all I want.

Much like tree roots looking like a snake is my problem more than the problem of the tree, I fully realize this one is a fear of my own making. And yet…

Tree branches sway and bushes rustle. It happens 100% of the time. If I was ever out on a trail and everything was still and silent, that would be super creepy. But occasionally, a bush will rustle just so.

Every so often it will strike me as ominous.

I don’t know if it’s due to the amount of rustling, or if it’s unreasonably loud, or what. But sometimes a bush will move in just a way that will make my mind wander to all of the things it could be.

Rabbits (most likely). But it could be a bobcat, or a snake, or a murder, or a rat carrying Ebola, or a zombie intent on starting the zombie apocalypse.

When my mind is primed (read: depending on how many books and movies filled with dire circumstances I’ve consumed lately), the sky’s the limit to what it could be.

Or maybe it’s just a rabbit after all.

What about you? Do you have any enemies in nature? 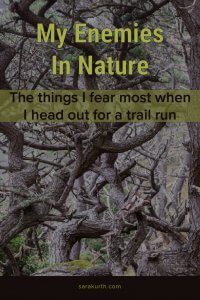