After taking nearly two months off (because of All This), I’ve started running again. I’m a bit concerned about what my running motivation and consistency will look like without an event to train for.

I’m a planner – I need something to structure my training around. 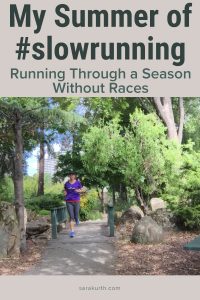 From my house, I have two basic routes:

I can turn right which leads to a lake that is too crowded under normal circumstances, and by all accounts has been overrun with people throughout our lockdown.

Or, I can run in any other direction, which is residential (and great for physical distancing), but is hilly.

Wanting to avoid crowds, hills it is. As I headed out last week for my first runs in what feels like forever, it was rough.

First of all, we were in the midst of a heat wave. Not great timing on my part, but you gotta run when the spirit moves you.

Whose brilliant idea was it to start running again in the middle of a heat wave? Surely it wasn't mine- im usually smarter than that. 3ish (untimed, ungarmined) hot and hilly miles, with lots of walk breaks to smell the blooming jasmine and say hi to the neighborhood cats. #immelting #forwardismypace #staystrongkeepmoving

Second, I was out of shape. Sure, I’ve kept up with exercise (doing mostly barre and yoga), but my cardio has been seriously lacking lately.

Third, I was in the hills.

While my run was physically rough, it was a different kind of run than I’d ever done before.

It also was the most enjoyable run I’ve had in quite a while.

Oh, hey there running! It's been a minute. I haven't been running during our shelter in place order because 1) I was already gearing up for a break after my leap day 50k, and 2) seeing others out and about disobeying the SIP rules made me super angsty. I couldn't make them do the right things but i could avoid seeing them by staying in. But I feel like the time is right to return. I'm leaving my Garmin at home for now, running by feel for however long I want. Stopping to smell the roses – or night blooming jasmine as was the case today- whenever I want. Today was 4ish super hot and hilly miles. #justalittlerusty

I’d left my watch at home. Mostly because it was dead as a doornail after not being used for two months, but also because I knew it wouldn’t tell me anything I’d be happy about.

I didn’t have a set plan on route or distance. I ran in one direction until I felt like turning or until I saw others ahead of me I wanted to avoid (usually because they weren’t wearing masks).

I walked a ton. I’ve never had a problem with walk breaks, especially on hilly courses. But even by my standards, I walked a lot on this ‘run.’

I (literally) stopped to smell roses and night blooming jasmine and marvelled at my neighbor’s purple passionflower.

I grabbed a bundle of rosemary tied in a ribbon that another neighbor had put on their front steps for anyone to take.

Was this a run that would prepare me for a marathon? Not a chance.

How far did I run? No idea. I can guess based on other routes I’ve done in the neighborhood (likely 3-4 miles each run), but I don’t know.

What was my pace? No clue.

Was this (and the two other ‘runs’ I did last week) the most fun I’ve had on the run in quite a while? For sure.

And that gave me an idea…

I’ve seen more of my neighborhood, pet more neighborhood cats, and smelled more flowers in my last 3 runs than I have in the last 10 years living in this neighborhood.

On these runs, I had an epiphany about my running this summer. I shouldn’t try to recreate race-centered motivation in a raceless season, I need to develop an entirely new motivation.

Last week, my motivation to run was something entirely different than it ever has been before.

My running journal was filled with observations and discoveries in the neighborhood, not pace and distance stats.

This will be my summer of #slowrunning

Search for ‘slow running’ in Google and you’ll get one of two basic types of results: how to not be a slow runner (a/k/a – how to get faster), or why being slow doesn’t matter (a/k/a why you shouldn’t apologize for being slow).

This summer, I’m taking a page from the slow food movement.

Here are my tenets for #slowrunning 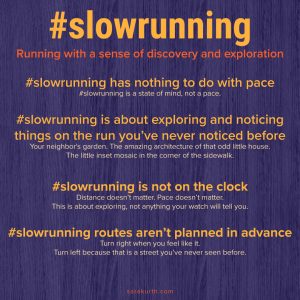 I’m really looking forward to my summer of #slowrunning.

How many neighborhood cats will I meet? How many little free libraries are there in a 2-mile radius from my house?

I don’t know, but I’ll find out over the next few months.

One thought on “My Summer of #slowrunning”