In what has become a New Year’s tradition of sorts, I again decided to do the (almost) back-to-back New Year’s half marathons this year. Put on by my favorite trail running company in the Bay Area (Brazen Racing), there is a New Year’s Eve race on the Saturday before New Year’s Eve and a race on New Year’s Day. If you do the half marathon option for both races, you can say it took you two years to run a marathon (and you get a special medal).

While I love these races, it was a fairly last-minute decision for me this year. I thought the Eve race was on Saturday, which conflicted with my training group’s long run. Like last year, the Saturday group long run is in San Francisco, running from the Ferry Building to the Golden Gate Bridge. It’s one of my favorite routes and I don’t want to miss it.

And for me, it just doesn’t seem right to only do one of these races. If I’m going to do the New Years’ races, I want to do them both or not at all.

But then, a few weeks ago, I noticed the Eve race was actually on Sunday (not Saturday) – there is no conflict after all! So I registered for both about a week before race day. 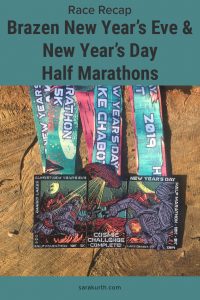 I didn’t set any goals for these races other than to have fun.

I knew I’d be taking it easy (even by my standards) for these races considering my multi-day running adventure.

Marathon training group long run day! The weather was cool and breezy, but clear (this would quickly become the weather theme for the weekend).

This is one of the most beautiful running routes around. People travel from around the world to run along the edge of San Francisco, and here we are just doing it as a normal running route.

I forget how many tourists are in San Francisco for the holidays. Going out to the bridge wasn’t too bad (it was still pretty early), but coming back we had to reenact NASCAR -dodging and weaving around people.

No thanks, I’ll skip it.

I knew going in Sunday’s half (at Quarry Lakes) isn’t my favorite course.

The course is crushed gravel and paved paths. It’s mostly flat and boring. But doing it is part of the double race deal. I wish they’d go back to the way they ran it the first year I did the double race (2011/2012), the same route (a ‘real’ trail) both days, but run in a different direction.

Oh well. Wish in one hand, spit in the other as my dad always says.

Weather was (mostly) clear and cool. Upper 40s at the start – maybe mid 50 at the finish. Great running weather – especially since I was parked pretty close to the start. I could wait in the (warm) car until almost start time.

Or more specifically, I was bored silly by this course.

I was amusing myself however I could during this race.

Since much of today’s run was out and back, I could see the steady stream of runners coming towards me. I was checking out the shirts of the other runners. Most were wearing race shirts. Some were from races I’ve never heard of. Some race shirts were seriously ugly (I’d seen this year’s Marine Corps Marathon shirt online and knew it was hideous, today was the first time I saw one in the wild – it was just as hideous.).

Brazen races have a very dedicated fan base, so a large percentage of the runners were wearing shirts from other Brazen races- many of which I’ve done. I found myself reminiscing about those races – either remembering the races generally or remembering something specific about the race the year the shirt was from – I’d remember the weather that day or some odd encounter I had with another runner.

It actually became a fun way to pass the time.

I’m happy with that. I know I could have pushed harder, but between having run 14 miles the day before and knowing I’ll be running another 13 in two days, I didn’t really see the point.

When checking out the stats of this run, I was surprised the elevation gain was 200 feet. It feels like this course is super flat with the only elevation coming from going under road overpasses.

I never would have guessed all those tiny little climbs would add up to 200 feet.

On my running-extravaganza day off, I did some foam rolling and walked a bunch, just to keep my muscles moving.

I’d considered doing a little run, just for giggles, make a 4-day mini-streak, but it was SUPER windy. And the wind was super cold.

Totally not worth it when the only reason to do it was to say I did it.

The New Year’s Day Half is an actual trail run. This race is held at Lake Chabot, and while it has a few miles of paved trail at the beginning and the end, it is largely on fire roads and multi-purpose trails and climbs just over 2000 feet.

As was the theme of the weekend, it was cold at the start. Or more specifically, cool, with a cold wind.

It wasn’t nearly as windy as it was on Monday, but windy enough to be uncomfortable to stand around in, so I (again) waited in the car as long as I could. The wind calmed down as the day went on.

It was downright nice by the finish.

As I was thinking about this race on Monday, I got it into my head that I was going to trip and fall in this race.

While this is a known (and experienced) risk, and it almost always crosses my mind when I run trails, every so often it becomes more than just a passing idea. This was one of those runs.

I was so much more aware of maybe tripping or falling on this run.

Not sure why it got into my head so much on this run, but I’m happy to say I stayed upright.

I Don’t Miss The Guns

There used to be a gun range next to this course.

The first year I ran at Lake Chabot, I didn’t know this. I was very confused by the constant gunfire (and why no one else seemed even remotely bothered by it). The gun range shut down a few years ago.

What’s With The Phones?

In this day and age, it, of course, isn’t odd for people to be on their phones during a run.

While I don’t really understand this (I’m not a huge phone user under any circumstances, and especially not when I’m on a trail with spotty phone reception), I know I’m in the minority.

In this race, especially in the first 3 or 4 miles, I noticed more people on their phones than I think I’ve ever seen before. At first, I thought it was people stopping to take photos, but it was more than that.

I’m shocked I didn’t see anyone trip and fall while trying to text and walk (or run) at the same time.

I felt really strong on this run.

There was some general fatigue (of course) after two days of long runs, but even so, this was the strongest I’ve felt on a trail run in a really long time.

While I couldn’t pass a single person on the flats (not that there are many flats on this course) or on the downhills, I was passing people left and right when going uphill – while I was walking and they were (often) ‘running.’

While this is often the case for me (I usually have a pretty strong uphill power walk), today it seemed even stronger than usual.

I guess I haven’t lost as much of my ultra trail fitness as I thought I had.

If you do both the Eve and Day races, you get a separate medal that connects the two medals to create one big mega medal. This year had a robot/galactic/space theme.

My biggest (and oddest) compliment for this medal? I love the color scheme. It’s an unusual color combo and I dig it.

It’s funny to compare the medal from the first time I did these back to back races in 2011/2012 and today. The designs and concepts have gotten just a smidge more elaborate in the intervening years.

Yes! I had a great time on these runs, even while amusing myself on the dull Quarry Lakes course on Sunday.

I didn’t fall on my face, and I even managed to set a personal course record on the Lake Chabot New Year’s Day course.

That said, I like these races best when they are back-to-back (or very nearly). The next few years, the races will be more days apart, which makes them less fun, as far as I’m concerned.

My running goals for 2019 are still fuzzy.

I’ll likely pace the Oakland Marathon in March. I’m on a waiting list for an Ultra in April, so time will tell if that will happen.

So I’m training… I just don’t know for what.

#flatsara is ready(?) for the (almost) New Years Eve AND New Years Day half marathons. Once again, it will take me two years to finish a marathon. Im sure this sounded like fun when i registered. #bebrazen #brazennye #brazennyd #twoyearmarathon #flatrunner

Compression – Zensah pineapples. I consistently get more comments and love for my pineapple sleeves than any other piece of gear I own. 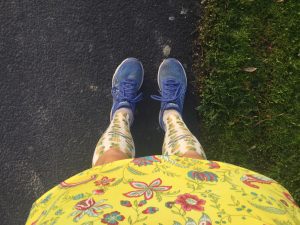