I’m always on the lookout for new things to try. New races, new distances, new adventures and new ways to expand my horizons.

On one of my hunts for something new, I came across the Night Sweats Marathon.

In the Marin Headlands of Northern California.

If you aren’t insane enough to do a marathon, there are 8K and 15K options too.

The Headlands are an ideal spot for trail running. It’s rugged, tough, and so beautiful that it’s worth enduring the tough. I’ve done several races there over the years. But at night?

I am intrigued by the idea of night runs.

I’ve done the E.T. Full Moon half marathon. Sure it was dark, but it was run on the highway near Area 51 in Nevada.

This is a trail. In the dark.

Even with a headlamp near the full moon, it’s a whole different ballgame.

And while I’m not terribly clumsy, I do have a history with trail running face plants.

So while night races are an intriguing idea and would be a new adventure, I confess I’m also a little scared.

When In Doubt, Volunteer!

What do you do when you are equal parts intrigued and scared?

You volunteer to work at the aid station!

That way I can check out the scene. I can stroll the marked trails a bit to see how well the course is marked, and get an overall feel for the event.

I can do my civic runner duty (since all runners should volunteer at races) and find out if I should (or could) do this run in the future.

The Thursday before the event, there was a huge storm with winds so strong I was sure my windows would break. It rained pretty consistently Friday through Saturday morning.

I was starting to get nervous about the impending volunteering. I was ready for the cold and dark, but cold, dark, and rain? That would be above and beyond.

But around noon on Saturday, the rains moved out. The skies cleared. By the 6:30 PM volunteer call time there was barely a cloud in the sky.

During the race, I was the keeper of the clipboard. The marathoners passed us, did a loop, and then came back to us. I marked off the runners as they went in both directions.

That way we knew that everyone was accounted for and not injured somewhere. We would also know when we could start breaking down the aid station.

It was cold (37 when I got back to the car at the end of the night), so an injured runner who couldn’t make it back to us could be in a dangerous situation quickly.

Luckily everyone was accounted for and healthy.

During our down times, I walked the course a bit to check it out.

It felt other-worldly to be on the trail in the dark. Everything felt bigger and more serene.

Usually when on the trails, I notice birds chirping, and all sorts of rustling in the bushes. At night it was an entirely different dynamic. More insect noises, less bush rustling. I didn’t see any raccoons or other critters, but I’m sure they were out there.

My real motive for walking the course was to see how visible the reflective course markings were. To my surprise, the flags were just as visible as the normal flags are in day races.

The moon was nearly full, and it was a clear night, so the moonlight was super bright. Some runners said they turned off their headlamps (which they were required to have) and could see just fine once their eyes adjusted.

What I hadn’t considered was that while running in the dark, you can’t see, or at least identify, anyone.

Every runner was just an approaching bobbing flashlight.

It was oddly anonymous.

Many volunteers and runners knew each other, but there wasn’t a way to know who was approaching until they were there.

There was no ego, no fashion, no look at me, no focus on getting the right photo for Instagram.

Even friends that came out to support runners couldn’t cheer for their runners, because you didn’t know who your runner was.

So everyone cheered for everyone equally – it really was the only choice.

What I was really reminded of on this run is how amazing the trail running and ultra running community is. Sharing recent race events and stories without the slightest bit of ego or bragging.

These are runners who run 30 miles a day and clearly think of it as no big deal. They talk about doing things like running the Route of Santiago de Compostela in Spain (nearly 500 miles, depending on the route), or the John Muir Trail (211 miles) or the Western States 100 miler, the same way I would talk about doing a 5K.

Many were sharing stories of the Georgia Death Race that had been run the week before (68 miles and climbing more than 40,000 feet).

And yet, my having not done those things (and in some cases not wanting to do some of those things- hard pass on the death race), does not make me less successful, or less accomplished, or less worthy of being there.

I was just as welcome to be there and share my stories.

It would have been easy for them to scoff at my measly (by comparison) adventures, but the distance didn’t matter. I had challenged myself at my events, pushed myself, whatever that means to me in my life. That was enough to be welcomed into the community.

Grizzled veteran or total newbie, runner or volunteer. If you are willing to be there and contribute and participate at whatever level you can, you are just as welcome as anyone else.

Those are my kind of people.

So Would I Run The Night Sweats Marathon?

Maybe I’ll run the Marin trails a few more times over the summer (in the daylight) so I’m more confident with the course, and then give it a shot. I’m so glad I volunteered and can now envision what event looks like.

A few days out and I’m finally catching up on my sleep. I got home Sunday morning, well, let’s just say I’m sure the early morning exercisers were getting dressed by the time I was home and in bed.

But it was so worth it. 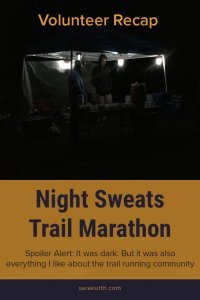