Anyone who has read any of my posts knows I am a big setter of goals. But I sometimes struggle to set running goals since I am not inspired by the most common running goal: getting faster.

Don’t get me wrong, I don’t object to getting faster, and that is a common side effect of the goals I do set for myself (for example doing regular strength training), but running faster, for the sole purpose of running faster, does nothing to inspire me.

So I got thinking about goals that will benefit most runners that aren’t directly related to running. 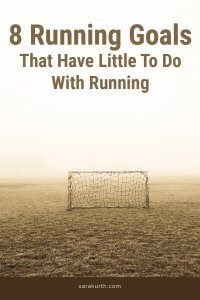 Even if you are the most careful runner in the world, things can happen on the run.

Heaven forbid, some things could happen that could leave you totally incapacitated.

Every runner should carry identification on the run. Some choose to carry their actual id or driver license. I’m always afraid I’ll drop mine, so I have a Road ID, though there are other similar products available.

If you, like me, believe in Murphy’s Law, carrying ID has an added benefit: if you are prepared for an emergency, that emergency is less likely to happen. 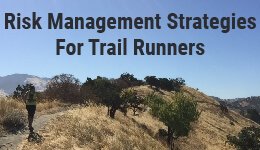 Volunteer At A Race

All runners, especially if you’ll ever register for a race, should also volunteer at one.

Over the years, I’ve seen too many runners be unacceptably rude to race volunteers. Considering my #1 rule of racing is ‘Always thank the volunteers,’ I’m sure you can figure out my point of view on being rude to the volunteers.

Volunteers often have to wake up earlier than runners on race day. They stand and work in the cold and dark. Think it’s hard running a race in the rain? Try volunteering – standing still – in the rain. All to help you make your running dreams happen on race day.

The best way to have the appropriate amount of empathy for race volunteers is to join their ranks for at least one race. It’s harder than you think, handing out water for hours on end.

Added bonus that many races offer free or discounted race entries (or other goodies) for volunteers.

Do good and get rewarded? Where do I sign up?

I’m a big journaler, both in life, and in running.

I’ve written a full post about why I think all runners should have a running journal so I won’t repeat myself here other than to say the best way to discover the patterns (both positive and negative) in your running is to write about them.

You often need to look back at a few weeks of entries to notice that you had the same thoughts or thought patterns. I consider myself fairly self-aware and until I have the benefit of time and distance, often even I can’t see the patterns. 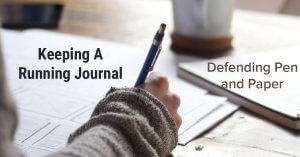 Add In Some Strength Moves

This doesn’t have to be a vast or in-depth cross-training program, if that isn’t your thing.

Adding just a few squats, lunges, and a minute in plank into your usual running routine can make a huge difference.

I was shocked at how much stronger I felt as a runner after I added in some strength work.

I’m an at-home worker-outer, so my go to workout is the Nike Training Club app. If you have the discipline to work out on your own, there are some surprisingly good strength workouts to be had using only your body weight.

I (hopefully) don’t have to tell you how important drinking enough water is, and yet few of us do it.

My water consumption, both in life and on the run, plummets in the winter.

Try an app like Plant Nanny to track (and gamify) your water consumption. This winter has been brutal for my plants in Plant Nanny. R.I.P. little snowbush. You deserved better.

You can also try a smart water bottle like Hidrate Spark 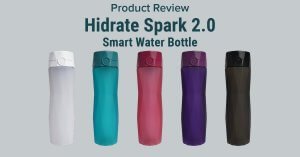 I know what I should do after a run, especially after a long run: stretch properly, refuel with healthy foods in a proper mix of carbs and protein.

I am a bit ashamed to admit how often I fall short in my cool-down routine, and I think many others fall into the same camp.

Develop a standard post-run routine and have healthy foods accessible for after you run.

Take Care Of You Gear

Running gear can be expensive. Take better care of it.

Don’t put your running gear in the dryer (it wreaks havoc on both the elastic and wicking aspects of the fabric).

Actually change your shoes out when they need to be changed out.

Get a detergent that is designed for workout gear, which can protect and restore tech gear and will help minimize the stinkiness of workout gear

When I lived in San Francisco, my usual route was running to the Golden Gate Bridge. It is one of the most amazing routes in the world, but even so, when it was my usual run, even it got old.

Switch it up on regular basis.

Something as simple as running your usual route in the opposite direction or running a block or two over can make a huge difference and make the route feel entirely new.

What about you? Do you have any non-running running goals? 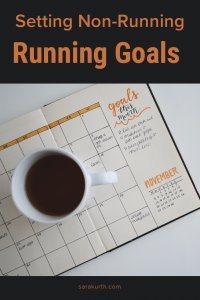