Marathon #28 (my third full marathon as a pacer) is in the books!

It was a bit of an emotional roller coaster leading up to the race, and race day was filled with the mental math required to finish the (poorly marked) marathon on pace, but ultimately I nailed my pace, and the weather was perfect, so I’ll focus on those positives. 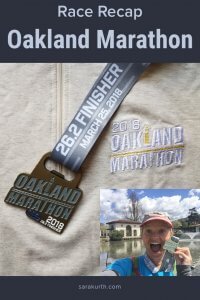 The drama around the Oakland Marathon this year was the marathon organizers DRASTICALLY changing the course a month before race day. Changes that completely changed the topography and personality of the course.

I’ve already ranted (at length) about the new course, as well as my thoughts about how and when those changes were communicated to runners during my training recaps. I won’t rant again here, other than to summarize it by saying the changes removed everything I liked about the Oakland Marathon (touring neighborhoods) and doubled down on what I didn’t like about it (industrial /warehouse areas and TONS of turns).

Apologies that I don’t have many photos to go along with this post.

Being a pacer, I had too much going on during the marathon (watching my time, chatting with my pacees, and holding my little sign) to take photos.

That said, it wasn’t a particularly pretty or photogenic course. I wouldn’t have had much to photograph.

While I hated the changes to the course, there is one upside – it still starts at Lakeshore Park which is a whopping 5 minute walk from my front door. Comes in really handy when the call time for pacers is 6:20.

Favorite Part Of The Course

In these recaps, I usually start off with a section: Favorite Part Of The Course.

Ultimately, the best thing I can say about this race and this new course is I didn’t hate it as much as I expected to. Not exactly a pull quote the race will be using for next year’s race.

There is one pretty view on the course. It is of San Francisco, but I’ll take what I can get. This is the photo I took of the area during a training run. 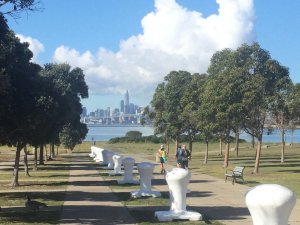 Least Favorite Part Of The Course

My running club had done a 20-mile long run on the course. As a result, I knew this wasn’t a very exciting course.

I also knew during that 20-mile run, we saw pretty much the entire course. The extra 6 miles were parts of the course we did twice. While I knew that logically, I was still surprised at how much of the course was duplicated.

The marathon was basically two loops of the same course with the ends changed up a little.

I may not have noticed how not ‘Oakland’ the course was, or how boring it was, or how it totally lacked course support if we only ran bits of it once. But when we had to do the same long, desolate sections twice, it was hard to miss.

I’m glad I was running this race as a pacer with a good group of runners. We were able to distract ourselves so it wasn’t too bad. If I was running as a civilian, I wouldn’t have been chatting with people and I think the nothingness of the course would have bothered me way more than it did on race day.

Every year, there is an odd section where the full and half marathoners merge. How and where this merge happens varies, but it’s usually awkward for someone.

Historically, the fastest marathoners come up on, and passed the slowest half marathoners.

This year, due to the layout of the course and because the half marathon started 20 minutes late, most full marathoners (including my group) had passed the merge point before the halves started.

This also meant every single half runner running faster than my pace caught us, and passed us.

We were passed by several thousand half marathon runners. (it reminded me of how running the staggered handicap start of the Dipsea Race must feel).

I imagine it was really annoying for the half runners to have to pass us slow fulls, but that wasn’t my problem. For us, it was hard to keep a steady pace and not speed up given the sudden speed we were surrounded by, but beyond that, it was a much-needed jolt of energy.

Prior to race day, I was sure someone was going to get lost or take a wrong turn because there are so many turns. To my knowledge, no one did, largely because I hadn’t considered how much of the course was duplicated.

The course change issue I didn’t expect was that the mile markers were not in the correct spots.

Considering that I require accurate mile markers to pace, that’s a problem.

I pace using a pace band. I hit a mile marker, compare that to what the pace band says should be the elapsed time at that mile marker, and speed up or slow down accordingly.

The first 17 markers were accurate(ish). But starting at mile 18, that all changed.

I was running a consistent pace, but at one marker I was 4 minutes slow. The next I’d be 2 minutes fast. I knew I was consistent, but I had no sense of how that pace related to the pace I should be going to hit 5 hours.

Did I Reach My Goal?

Hella yes! (‘Hella’ is an east bay thing for you non-locals)

I’m not saying this to be modest, but I’m shocked I finished within 10 seconds of my time.

I’m a good pacer, and a very consistent runner. I take pacing seriously and usually finish very close to my pace time.

But this year I was basically going on instinct. My Garmin distance was off and the mile markers were off. I honestly had no idea where I was on the course and how close my time was to being on pace.

When I was a mile or two out, I could (sort of) do the math. Here’s the math problem:

Note: my mental math skills are iffy on the best day. And 24 miles into a marathon is not my best day mentally. But since it was my only option, I did the best I could.

I would have been legitimately proud of myself for even being close to 5 hours, I’m ecstatic that I was able to nail it.

With all the course drama and my mixed emotions about my future with the Oakland Marathon (more on this later), this was the most pessimistic I’d ever been going into a race.

I was actively trying to put out of my head I was going to run a marathon, and almost did too good of job.

During race week I kept forgetting it was race week.

I still felt great on race day. Physically, I felt strong. I maintained a (mostly) positive attitude. I had a few hot spots on my feet starting about mile 20, but totally within the normal realm of race day issues.

As expected, there were basically zero spectators on the course.

A few aid stations had DJs or sound systems (shout out to the Oakland Raiders Black Hole who did the Raiders proud with a rocking DJ and plentiful face paint), but there were no other bands or entertainment on-course.

As a lover of Oakland and its vibrancy, this marathon course through no-mans-land was a big disappointment.

a/k/a: I ran marathon and all I got was a lousy banana!?

The post-race food was pretty sad.

Between the empty tables and the food I saw faster runners eating near the finish area, I know they had more post-run food for runners, but they’d run out of much of it by the time I finished (5 hours isn’t that slow…).

Luckily, vendor booths (stuff available to the public) sorta made up for it.

Lagunitas beer was still available. In previous years they’d run out, not because they didn’t bring enough, but because the fireman serving the beer had more than their fair share (I can’t hold it against them, they save peoples lives after all, I’ll let them drink an extra beer).

GU was giving out boxes of Stroopwafels (not a waffle, a BOX), and Ohco chocolates was still well stocked (thanks to Ocho who pitied me and upgraded me from a snack size to a full-size bar when I thanked them for still having food left later in the day – unlike the race itself.)

Hydration was water only every half hour.

Fun fact: eating a pineapple GU followed next in rotation by a birthday cake GU leaves a nice pineapple upside-down cake taste in your mouth.

In my opinion, the course changes, and especially the timing of them, was handled very, very poorly by CSE, the race organizers.

They showed a complete lack of interest and respect for us runners. As a result, I currently don’t feel like I can continue to support them or any of their races. Meaning this may be my last Oakland Marathon.

That said, I love Oakland and I want to run marathons here.

While this race has never been perfect, it was a good showcase of the town, and I hope something changes in the next year which will let me forgive them and run again.

If not, I’m glad I was able to end on a high note, feeling strong and nailing my pace.

#medalmonday "No.61 Lace up your running shoes for the annual Oakland Running Festival" ✔. Only 99 to-dos to go! #oaklandloveit #oakrunfest #oaklandmarathon

I’m still looking for my fall marathon (which will, in turn, dictate my summer races). I have an eye on something, but registration doesn’t open for a few more weeks. I don’t want to get my hopes up until I know I’m in.

For the time being, I only have race volunteer shifts on the calendar.