They had done several things in the weeks before the race (and on race day) that showed so much disrespect for runners.

Topping my complaint list: they significantly changed the course less than a month before race day (not the usual course tweaks that happen at every race as city permits are finalized) – 95% of the course changed. The mile markers were totally in the wrong places (a big problem when trying to pace). And on race day, they ran out of food at the finish (by the time I finished with my 5-hour pace group, I was given half a banana. I then had to walk by dozens of tables that had long ago run out of food)

And yet, here I am, again doing the Oakland Marathon.

The race was transparent with the negative feedback they got from runners (I swear it wasn’t just me with issues) and promised to address them. They hired a local representative who seemed more invested in the local community (the race company is based in Baltimore and even in the race’s best years, they don’t seem to have any real interest in Oakland or the Oakland running community).

Plus, I’ve been a coach and pacer for my running club’s training program and many of the people I’ve been running with for months were running.

And selfishly, it fits well into my training. I’m doing an ultra in April and Oakland fits perfectly into my training plan as a training run. I could either do a solo 26-mile run or do Oakland.

So here I am, giving them another shot.

But I’m telling you now Oakland – fool me once…

As the pace group leader for the 5-hour group, I have only one goal – to hit 5 hours. 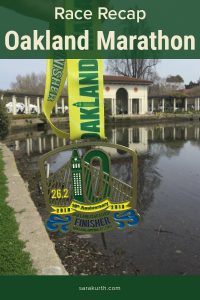 I get so nervous when I pace.

I know I can comfortably run a marathon in 5 hours. And I ran longer than 26 miles just last week, but there is just something about pacing that gets me nervous.

I enjoy pacing, especially when I’m pacing slower groups (which usually means I’m with many first-time marathoners – I love helping them through race-day), but I also know things can happen in a marathon, even when running at a comfortable pace. If something goes wrong, it won’t just impact my race, but those running with me.

That would make a bad race that much worse.

I live in Oakland and one HUGE upside of the Oakland Marathon is the start line is less than a 10-minute walk from my front door.

The single most convenient race start ever!

This entire training cycle has been unusually windy and rainy. My training group has done soooooo many long runs in the rain!

I was especially concerned about the potential for wind. This year’s course is on the Bay Bridge, which is great, but the bridge can be miserable on a windy day.

But race day was perfect for running.

The fire arch at the Crucible

They really pushed the ‘run the Bay Bridge’ angle in the race marketing. Going into race day, I wasn’t overly impressed with the idea. I’ve run the bridge several times before so I thought it would be 1) underwhelming or 2) too crowded with runners going in both directions on race day.

But it was neither.

Runners were spread out by the time we hit the bridge and running it actually made the course go by faster.

Other than the bridge, the course (as you maybe can tell based on my less-than-glowing summary above) gets a thumbs down.

We ran a long (2ish mile) section on Mandela Parkway three times. It’s a perfectly nice road, but doing the exact same thing three times was a bit much.

It was a very tight turn and was a very unceremonious end to what was the centerpiece of the course.

Did I Accomplish My Goal?

I don’t love being a minute off, but I need to cut myself a little slack. After running for 5 hours, 1 minute off!? 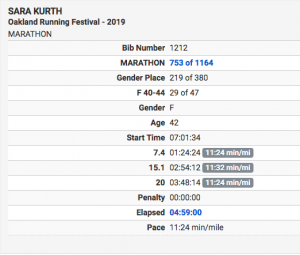 But I also know I slowed down a bit in the last few miles since I’d been running just over a minute fast. I hate it when pacers do that, but I just couldn’t seem to dial into the right pace.

Even with my slow down, it wasn’t too bad and I know I’m being too hard on myself.

Ultimately, I felt great throughout the whole race, and the people running with me did great – which is the whole point of being a pacer.

And if I’m going to be off, I’d rather be a little too fast, than too slow.

My 5-hour pace group was a larger group than I sometimes have.

As is often the case when pacing, I didn’t have many runners stay with me the whole way. A few leap-frogged with me – running with me for a little while, then either speeding up or slowing down, then regrouping with me.

Several of my pacees from the running club ran with me a lot of the way. It was great to see them running strong on race day.

Many in my group were still feeling strong around mile 25 and I talked them into finishing faster (As I told them, it was time ‘I push my baby birds out of the nest’).

I know TMI, but still…

I rarely have to pee on the run. In part, I’ve simply trained myself not to go, and in part, I’ve gotten pretty good with fueling and hydration to prevent it.

Starting about 5 miles in, I seriously had to pee.

While it would have been annoying, I could have managed a fast potty stop while pacing. But I powered through without a stop.

Oakland had so many aid stations! And they were well stocked and well-manned aid stations at that.

I remember reading they would have GU at 2 or 3 of the aid stations. Instead, they had GU, GU blocks and potato chips at pretty much every other aid station, and there seemed to be aid stations about every 2 miles.

The mile markers were in the right place this year (or at least they weren’t so far off as to noticeably mess with pacing).

That should be a given, not a thing to celebrate, but I’ll celebrate anything that allows me to pace by anything other than dead reckoning (like I did last year).

Every year, the race tries something different with where and how the half and the full runners meet.

It’s often a bit awkward for somebody. Either the fastest marathoners come on the slower halves, or vice versa.

This year was the smoothest merge I’ve experienced at Oakland. We merged around mile 22 (on one of our many outings on Mandela Parkway) and the full runners came up on the half runners that were running pretty close to our pace.

It was fairly seamless.

And The Finish Food Situation?

I was very vocal about my displeasure about the race running out of food at the finish last year. They apparently had enough, but didn’t control the disbursement early in the morning, so they ran out of food way too early when 5k runners started taking 3 of everything.

Races short-changing slower runners (whether intentional or not) is one of my great running pet peeves.

The race promised to do better this year.

At a race sponsored event a few months ago, I told the local representative I would riot if they ran out of food again this year.

They had PLENTY of food at the finish!!!

I had my issues with Oakland last year, but I’ll give credit where credit is due – they listened to feedback and made changes.

The Oakland Marathon is (mostly) back in my good graces.

I know they could do better.

Immediately? 13-17 miles (I haven’t decided yet) tomorrow – the joys of ultra training.

#flatsara is ready for Oakland Marathon pacing duties tomorrow! And why yes, i did switch out my pack of orange gu blocks for a pack of margartia ones so it would match my outfit better… #easilyamused #flatrunner #oaklandmarathon #pacerduty #marathonpacer