Welcome to my weekly recap for the Oakland Marathon. Read week one and week two.

My full intro to my training for the Oakland Marathon can be found in my week one post, so I won’t repeat it all here. The short version is I am training for next April’s Oakland Marathon. I am also a coach and pacer for my local running club’s training program’s weekly group runs.

My Goals for the Oakland Marathon

I did about 20 minutes of yoga this morning and that was pretty much it for the exercise. I’m enjoying all the quiet days I can during the first part of training while the mileage is more manageable. 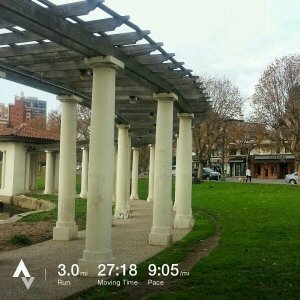 My run this morning was again uneventful. I like uneventful when it comes to runs.

During the 45-minute ‘Perfect 10’ NTC workout I discovered my new least-favorite exercise. For the longest time, I hated Burpees. I blame Mr. Kosteltz – my junior high gym teacher, who was also the football coach. He didn’t seem to realize that not every 7th grader was fit enough for endless burpees like the guys on the football team may have been. The experience left me traumatized.

But as I’ve lost weight and gained strength, burpees don’t seem as terrible. Mountain climbers, however, I now detest with a passion. Like many runners, my upper body strength is less than stellar, so anything plank/push-up related is not where I will excel.

I was sore for the rest of the day, so it must have been effective, but boy did it drive me nuts.

I live right near a lake (about 3 miles around) that is my go to running destination. For whatever reason, I have gotten into the habit of doing my loops of the lake counter-clockwise.

I decided to go really nuts today – I did the loop clockwise. Crazy right? It’s odd how different it felt.

During my usual route, there is a point where I start to feel like I ‘should be’ tired. Even if I was feeling great up to then, I hit that point and I crash, 100% for mental reasons. Going the other direction, my brain totally short-circuited and had no idea where I ‘should be’ tired.

Only stretching and a 30-minute NTC workout today. This was the strangest NTC program I’ve ever done. Usually, there is some pattern or reasoning the moves. Do 1 minute of a series of moves, then 45 seconds of the same moves, or some other linear or logical pattern.

This program ‘Explosive Agility’ had a series of moves that repeated several times, but there was no rhyme or reason to the number of reps. 6 reps of this move, then 25 of that move, then 14 reps of this other move. I know it’s good to keep your muscles guessing, but this took that idea to the extreme.

It was legitimately cold for this weekly group long run. Not our usual California ‘its so cold, it’s nearly 50 degrees’ B.S., but it was actually near freezing (37 degrees) at the start. Some runners had to scrape ice off their windshields. That’s rare in the Bay Area.

The long run this week was on the Oakland Marathon course. Specifically, nearly everyone’s least favorite part – a 5-mile section from the first half that is nearly all uphill. Our run was pretty much 5 miles uphill, turn around and then do 5 miles back down.

I felt pretty good. Probably the best I’ve ever felt on these hills (and I’ve done them a lot). That isn’t saying much because I usually struggle up them, but I’ll consider ‘not as bad as usual’ as a victory. I was again the pacer for the 11:00 minute per mile group. I was very happy with my overall average pace of 11:05. Given the hills, I expected to be more off than I was.

I was feeling great during today’s 45 minute NTC workout ‘Controlled Blast’ until near the end when the core section began: mountain climbers, split jumps, straight-leg bicycles, and lateral bear crawls. All my least favorite moves bundled together and repeated for 8 minutes! Oh goody.

I’ll confess to half-assing the mountain climbers and split jumps. I did them, but I moved waaaaay slower than I could have.

I’m still 100% with doing my morning stretching routine, and I’m getting better with the post run stretching. I came up with a little post-run routine. As expected, that has made me more likely to do it. The less I have to think about something, the more I’m likely to do it.

It’s based largely on the Equinox’s Worlds Greatest Stretch, with a few yoga poses (down dog and triangle pose) added in.

Plan for Next Week

Hills! I will focus on adding in a little more elevation gain into my runs.

This will largely take the shape of adding in a few hill repeats at the end of a run. I live on top of a big hill, so I have no excuses of not having easy hill access to keep me from doing them. 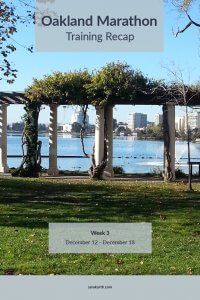