The Bay Area was hit with a bit of heat wave this week. There is something wrong with having to wake up early to get a run in before the heat of the day in February. Makes me fear for September, when the real heat waves usually arrive.

My mid-run YouTube filming continues, I’m definitely finding a rhythm to it and feeling more comfortable in front of the camera. Who knows if it translates to better on-screen performances (that will be for you all to decide).

Good on-screen performances or not, the fruits of that filming are coming to pass with the release of my second YouTube video (I still get a kick out of writing that sentence). 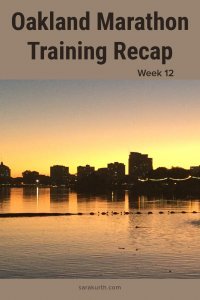 The official title of my volunteer position is ‘kitten cuddler’. Some days its a really tough gig. #runnersnotrunning #restday #marathontraining

Day 15 of the Yoga Challenge! I redid the Shoulders, Neck, and Upper Back video. Much like the Hips video, I really needed it.

Beyond that, no running today, just a long walk trying to find quiet corners to film a bunch of intros for my YouTube videos.  I’ve now gotten used to watching the sweaty, makeup-less version of me on film, it was odd to see myself on video with makeup.

I’m not sure what it says about my hair and makeup skills that I kinda like the sweaty, mid-run version of me more.

First run breaking in my new pair of Kayanos. So blue. So very, very blue. I may need to switch out the laces to break up the blue. Wouldnt have been my first choice, but they only make the wide option in one color. #asicskayano24

I was trying a new combo route – up in the hills to Piedmont (my go-to 4 mile route) over to Mt. View Cemetery (my new go-to 5 mile route), so I wasn’t sure exactly how the miles would work out, but even so, when I was well over 3 miles and still running around the cemetery (the farthest point out), it simply didn’t occur to me to turn around and head home.

I know i shouldn’t complain (and yet i will…) but i am totally over our little heat wave. I shouldn’t have to wake up early to run so i can beat the heat the first week of February! Better than ice and winchills i suppose. #beattheheat #spibelt

I’m totally over our winter heat wave. Temps have been in the 70s (I thought they felt warmer – I would have guess 80s).

I revisited my Tuesday route, but this time, I actually paid attention to the mileage and turned around at the right spot.

I like my new 5-mile route. It’s a keeper and a good reminder about why I should continue to try new routes each week.

I released my second YouTube video into the wild today – check it out:

Only did my usual morning stretching today.

Nothing else particularly active, just drinking lots of water, trying to stay hydrated in preparation for our long run tomorrow.

We only had a week off, but for some reason, I felt like I hadn’t seen the group in months. While my pace group was basically the same people, the training group overall seemed to be larger this week. Our theory is that more half marathoners are realizing they should get their butts in gear about training and are actually coming for runs.

While it was still warmer than it should have been in February, it was actually a beautiful morning for a run. The temps were warm, but not unreasonable. Our run was on the Bay Trail (which – not surprisingly – heads along the bay), the sun was shining on the water and we had amazing views of San Francisco in the distance.

Not too shabby as run views go.

During the last few miles of the run, I started to get side stitches. I haven’t had those in years. I was slouching a bit as I was tiring out, and not breathing as deeply as I should have been. It was a good reminder on form.

Broke out the foam roller (eek!) in the evening, as I stayed home finishing my binge-watch of Altered Carbon on Netflix. We distance runners are not known for exciting Friday or Saturday nights.

This morning I realized I’d totally dropped the ball on my week’s focus of doing strength work. So I decided to try a new workout app – Sworkit.

I’ll give it a shot, comparing it to my gold standard of home workout apps: Nike Training Club.

They have a 28-day February challenge, with a workout every day for the month varying in length, intensity, and focus. I jumped in at day 11. Yoga for Body Toning. It was fine – standard yoga moves, but it felt kind of awkward – there was no real flow between poses. I also went back and did day 5 – Upper Body, to work out my poor, ignored upper body.

Strength. Notice I planned ahead and put the dates on the calendar?