The first of two peak mileage weeks. My weekday runs are not too bad, but 20 miles on Saturday!

My never-ending quest for good, high-quality at home workouts brought me to Sworkit. I’ve read many glowing reviews of this app, which I’d read has a wide selection of workouts.

Spoiler alert: the best thing I can say about it is there are a wide variety of workouts. 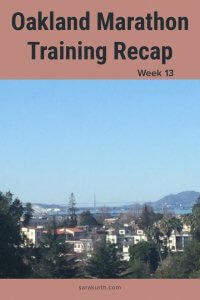 I love the Nike Training Club app for at home workouts (and Asana Rebel for daily stretches), but I felt like I was doing the same workouts over and over so I thought I’d try out a few new apps to see what else is out in the world.

Next up is Sworkit.

I’m going to try out this app for the week. They have a February challenge with a workout for each day of the month. I’m not willing to commit to the full month, but I’ll do (at least) one of the workouts each day this week.

Seemed like too much prep and moving from position to position for a short stretch class.

In my hunt for new running routes, i found a winner. It's super hilly, so i wont be breaking any land speed records, but the hills are good for the legs and the lungs! #seenonmyrun #spibelt

Did my new go-to five-mile route into the hills today. Felt good.

It was one of those runs where I don’t have much to say about it (good for running, not so good when I’m trying to write a blog post about running).

Sworkit of the day is ‘ABSolutely Awesome’.

It was fine. Standard core moves.

The danger of running new routes is hitting the mileage. I was only scheduled to run 5 miles today, but basically forgot to turn around while on an unfamiliar path. #iguessthatsagooodthing

I did it again! I can’t quite figure out the right place to turn around in my new 5 mile route, so for the second time in as many weeks, I ran 6 miles instead of 5.

Sworkit was ‘Valentine’s Day Workout’. Based on the title, I expected at least a few moves that required two people, but it had nothing to do with Valentine’s day.

It was a standard workout of jumping jacks, crunches, and bird-dogs.

I sense theme developing – it was fine.

There's a Japanese Teahouse in amongst the hills of Piedmont!? The things you discover when you venture out and run new routes. #seenonmyrun #seeingnewplaces

Actually ran the right mileage today. I took the fact that I’d run the right distance for granted for years, but suddenly I’m proud of myself for not accidentally running an extra mile.

Sworkit workout of the day was ‘Standing Only Stretch’.

Only did today’s Sworkit workout – ‘Pilates’.

The moves themselves were fine. But:

Caboose bathroom (and selfie) break and a farmer's market – that must mean Danville- which means its almost time to turn around! Felt great for our first 20-miler – i could have kept running, but i don't think my 11:00 pace group would have liked that very much. #lmjsorf2018 #icouldhaverunforever

Felt better on our first 20-miler than I had any right to feel running 20 miles. I could have kept running today. I could have run the marathon today (and done it with a pretty good time too)!

Fingers crossed I feel as good on race day.

Sworkit was ‘Full Body Stretch’. Once again, a lot of standing up and sitting down with a poorly arranged combination of moves. If I’m already sitting down doing a forward fold, why are you going to have me stand up to do a chest stretch only to have me sit down again for another move?

I know this is annoying me way more than it should, but it feels like I get more of a workout with the constant standing up and sitting down than I do from the workout.

Sworkit week ends with ‘Yoga For Runners’. My impression of the app stays intact – is it was fine.

On the upside, for the first time, there seemed to be some logic to how the moves were arranged. Since a low lunge and warrior 2 are basically the same lower body move with different arm positions, they were done one after the other.

What a novel idea!

But again, no time to move from position to position, so seconds were lost in even the most straightforward transition.

Hydration. I’m terrible about drinking enough water in the winter. This training cycle has been no exception.