I’m in the midst of the January doldrums. My hilly runs were super slow (even for me), and I had a general lack of enthusiasm.

I read somewhere that January 12th is the day that most New Year’s Resolutions fail. While my blahs are not resolution based (my resolutions aren’t pass/fail), I can totally sympathize with that date being some sort of enthusiasm breaking point. 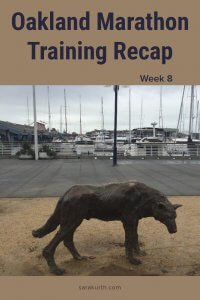 The featured photo this week is one of the wolf statues at Jack London Square in Oakland. My usual 7 and 8-mile routes take me past them.

I love it when cold rainy days fall on rest days! Instead of running in the rain, im taking care of kittens waiting for furever homes. So much cuddlier! #restday #runnersnotrunning

Another cold, rainy day that aligned with a rest day. Love it!

I did don my rain boots to brave the weather for a walk, more to be sure I left the house than the exercise, but either way, it got me exercise.

I also did the Asana Rebel daily stretching workout – ‘Mountain Spilts’. I don’t remember doing this one before, I can’t say it’s my favorite – lots of time in boat pose. Grrrr.

Today’s run can only be described as ‘meh.’ My body wasn’t interested, my mind didn’t care. The only positive: it’s done! #somedaysarelikethat #seenonmyrun

I was shocked at how slow my run was this morning. It was on a hilly route in the Piedmont hills, so I knew I wasn’t going to be breaking any speed records, but still…

I felt… not terrible on the run, but yikes.

Maybe I was just having an off day. The Asana Rebel workout ‘Ocean Flow’ was also not my best. ‘Ocean Flow’ is one of the short little workouts that manages to combine all my least favorite moves. Dolphin pose and push-ups? Once again – Grrrr.

I’m surprised they didn’t find a way to work in mountain climbers to make it a misery trifecta.

Every time my run takes me to Jack London Square i am reminded, to my great shame, i still have not read Call Of The Wild. #seenonmyrun #illdoitonedayiswear

After yesterday’s run, that I could only describe as blah, today’s was wonderfully uneventful.

On some runs, I feel amazing and like I could run forever. On others, I just go out and do my thing and never give it a second thought, which can be a good thing too.

That’s what I would consider today’s run: remarkably unremarkable.

Asana Rebel was ‘Six-Pack Flow.’ Not surprisingly all core. This has not been my favorite stretch of Asana Rebel workouts. However, they’ve been bad because they are hitting the muscles that most need to be worked out – they’ve all been focused on my weak spots.

I know that’s good physically, but mentally, I could use a workout that I can just knock out of the park.

I donned my iceland buff before hitting the hilly urban trail this morning. You never know when you may need the protection of a dragon or the stone giant #bettersafethansorry #skjaldarmerki #landvættir #bergrisi

Another run heading up into the hills of Piedmont.

I’ve decided I need to make a concerted effort to improve my hill/trail endurance.

I fully expect my times on hill runs to be slower, but I feel like I am using that as an excuse to not push myself as hard as I should.

Another rest day in preparation for tomorrow’s 16-mile long run. It struck me today that it seems really early in the program to already be doing 16 miles, but we are 8 weeks in.

I find that really hard to believe.

Group run on the hardest part of the Oakland Marathon course this morning with the running club. As the pace group leader for the 11:00 group, im pretty happy with my time considering 5 miles of uphills #lmjsorf2018 #runoak @oaklandmarathon

Today was another group long run on the hardest part of the Oakland Marathon course – so 5 miles of uphill running. I think these hills are harder in these training runs than they are on race day. On race day, they start at mile 6 or 7, so I’m warmed up, but not yet exhausted. In training, we start from Rockridge BART, so there is no warm up. We start running and within a half a mile we’ve started up the endless uphills.

There were 5 of us that ran the full route (we had half-marathoners with us, but they either turned around at mile 3.5 or ran with us to Fruitvale BART. I think it was the first time ever where there were more guys than girls (3-2 in favor of the boys) in my pacing group.

I’m not sure that is indicative of anything, but it’s one of those things I notice when I have nothing else to think about during a long run.

I actually think I noticed it because part of the run was in a not great part of town. It’s not a bad part of town by any stretch, but it is an area where I wouldn’t want to run alone, and in past years I’ve been very aware of the fact I was running in a group of girls.

Only yoga and Asana Rebel stretching today. I feel like I might be coming down the with the cold that is going around, so I’m laying low.

I’ll confess that I’m currently 50/50 on if I’m actually getting sick or if I’m just talking myself into feeling sick because everyone else is getting sick.

In either case, there is no upside to pushing it.

I’ll say hydration since that is something I can do even if I do come down with the cold.