I was totally distracted on my runs this week by filming.

All week, I stopped mid-run to film little segments for videos (based on past blog posts) that I’ll edit together and put on YouTube starting next week. I’ve also been playing with my GoPro to potentially film some trail runs.

Wednesday and Thursday, I got so focused on cameras and settings and locations and sound, the fact I was in the middle of a 4 or 7 mile run nearly slipped my mind.

I guess it’s a good thing, when running 7 miles is an afterthought. 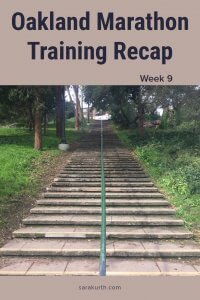 I know some runners hate rest days. I, however, am not one of them. I (usually) love running, but I also love giving my Kayanos the day off and taking care of the kittens waiting for furever homes. #restday

This morning’s stretching was Asana Rebel ‘Sun Flow.’ A super-short modification of a traditional sun salutation. While I didn’t knock it out of the park, unlike last week’s Asana workouts, this one didn’t focus entirely on my weak spots.

Maybe not as good for the body, but much better for the ego.

I took a special side trip into the rose garden specifically to run up and down the stairs a few times… Remind me why i thought that was a good idea? #runthestairs #stairlaps #seenonmyrun

I said last week I needed to work on my hill endurance – I took that to heart and detoured my run this morning to go into the Rose Garden specifically so I could run up and down their stairs a few times.

The best thing I have to say about the experience is it’s over.

It is an effective workout, I’ll give it that.

Sometimes i just love an uneventful run where nothing of note happens. It may make for a boring IG caption, but it’s good for the psyche. #seenonmyrun #irunoutside

One of my New Year’s resolutions is to do more videos. As a result, I’m experimenting with a few new toys and tools. Or more specifically, I’m finding new ways to use old toys and tools.

I’ve been taping a few segments mid-run to be turned into YouTube videos and I’ve been filming a few runs with my GoPro trying to find the right settings and tools to film runs for time-lapse videos.

So far, I’ve found a few methods that don’t work.

I still feel super silly doing anything video related, but I’m slowly getting more comfortable and a little less self-conscious.

Whether anyone else will like the videos I’m putting together remains to be seen, but I’m enjoying myself, that’s something.

Im no electrician, but this doesn’t look quite right… #seenonmyrun #somethingdoesntlookright

My filming experiments continue. I’m closing in on the right GoPro settings, and I’m slowly but steadily checking off segments to film.

I was so distracted by filming today that my run became almost secondary. I was largely filming in a park in Piedmont. When I’d filmed my last bit, I was trying to remember where I’d parked. It took me a second to remember: ‘Oh yeah, I ran here.’

Last night, I attended a ‘Mindfulness and the Endurance Athlete’ Seminar at GU HQ. It was an amazing presentation. I took 3 pages of notes for an hour talk! That’s a lot of notes even by my standards. As a result, I am newly aware of mindfulness and the role it plays in running (an event recap will be posted on Tuesday).

I’ve gotten out of the habit of meditation, but I’m inspired to start it up again. I may have to break out the Headspace app which has been gathering dust.

Another group long run in the books! It seems really early in the program to be doing 18 miles, but i do whatever the plan tells me #slavetotheschedule #lmjsorf2018

Our group long run today was at Alameda Creek Park, home of the multiple out and backs from the New Year’s Eve Half.

I don’t know why I hate this course so much.

My half PR is on this course. I felt good (if not great) on it at this year’s New Year’s race and again today. So it’s not that I’ve had bad runs on this course

I do (and like) many other straight out and back courses, so it isn’t that it’s flat and straight.

And yet… I hate this one so much.

The only thing I can think of is that this course (unlike other straight out and back courses) doesn’t have much scenic variety. Once you’ve seen the view (nice as it is) that’s it.

But instead of focusing on how much I don’t like the course, I’ll focus on the fact that I ran 18 miles and felt great. I don’t know what my pace actually was. My ‘offical’ Garmin pace was 10:40, but I don’t trust it – my Garmin went wonky in the last few miles:

Trust me, there is exactly zero chance that I actually did a 9 minute mile in the last mile of a long run. Towards the end, no matter how much I slowed up, my Garmin pace kept getting faster.

I’ll admit my record so far this training cycle of doing anything I really could call cross-training on Sundays is not great.

Today I went for a long walk and did the Asana Rebel workout ‘Core Plank’ (one guess what move was the focus of that workout).

Probably should have done more, but I didn’t.

Strength. I need to either start a new NTC program or find another substitute so I’ll still do strength work.