I had many things going on for this race.

I’m always a bit nervous in the week leading up to a marathon, a side effect of pre-race jitters and taper stresses, but I was more nervous than usual for Oakland. Being a pacer adds an extra level of stress and I also didn’t want a bad race on my birthday.

Spoiler alert: The race was great and I felt amazing so it turned out to be a fantastic birthday. Dare I say one of the best I ever had?

This was also marathon #26 for me, which felt significant. Are ‘golden marathons’ a thing? A marathon for each mile in the marathon? Technically I guess I’ve now run 25 full marathons and 1 ultra-marathon, so it’s either 25 or 26 depending on how you count it. I lump them all together, so I count this as #26.

The race start was relocated this year due to construction.

The start line was a whopping 3-minute walk from my front door. 4 minutes if I had to stop for red lights.

I’m usually not a huge celebrator of birthdays. There are no other circumstances in life when I would wear a birthday sash and crown, but if I was going to run a marathon on my birthday, I wanted everyone to know it. I wanted birthday shout outs.

And I got them! I felt kinda bad for the other people in my group who had to hear my birthday cheers for a solid 5 hours.

But honestly, it’s a sorry, not sorry kind of thing. I loved it.

My Favorite Part Of The Race

First, was the aforementioned birthday wishes along the course.

Second, was reaching the top of the hill.

There is a big hill (or actually a series of hills) that span from mile 8 to mile 13. I’ve done many training runs on this section of the course, so I knew what I was in for, but it’s still a lot of uphill. I struggled a bit, but reaching the top and seeing the view of the city from there almost makes the hill worth it.

This is not uncommon, but when pacing, the difference in distance means the pace you’d run to finish 26.2 miles in 5 hours (11:26 minute/mile) isn’t right. Which means I have to do the math to adjust the pace on the fly, which is not something I excel at under the best of circumstances.

My training cycle overall felt really good and I guess that was a positive omen.

I felt really great on the run. The hills felt a bit tougher than they had in training runs on the same course, but it wasn’t unreasonable.

My calves got a little twitchy and tight at around 20 miles, but they never cramped or caused an issue. I had only a small hot spot on my big toe that was annoying more than a problem, and no chaffing to speak of.

Not sure what I did differently, but I like it.

There is an amazing ice cream shop in Oakland called Fentons Creamery. They have a booth at the race and give out ice cream. However, every year they run out long before I finish.

They were setting up next to us as the pacers were gathering before the race. They said they’d save me a birthday ice cream. I thought it was nice of them to offer, but assumed it would get forgotten.

But it wasn’t- they saved me an ice cream!

And man did it taste good.

What Hurt Most The Next Day

Calves. My last few marathons have been trail races, where I don’t usually feel as sore the next day (I use different muscles groups on the trails due to the variety of terrain and elevation).

I’d kind of forgotten how sore I can be after a road race.

Nothing a few sessions with the foam roller won’t cure.

I know as a pacer I’m supposed to finish in my expected time, but I’m still a bit shocked that I came as close as I did.

To be less than 30 seconds off after running 26 miles? I impressed myself with that.

Another marathon in the books! Hot day, but could’ve been worse. I was the pace group leader for the 5 hour marathon – nailed it! #oakrunfest

Oakland is my adopted hometown, and this marathon does a great job of showing off the variety of neighborhoods and people that make it such a vibrant place.

It’s amazing as you run through Rockridge, Montclair, Diamond Heights, Fruitvale, Jack London, and West Oakland to know they are all part of the same town.

They all feel so entirely different.

My Reward To Myself

A cardinal rule of fitness is to not reward fitness accomplishments with food.

I very often break this rule.

I plan on going on a little outing to Squeeze Inn in Tracy later this week for a burger with a cheese skirt and beer battered fries. It’s a cheeseburger with about a half pound of cheese that is fried around the outside of the burger.

It has no redeeming nutritional value and yet is totally worth it.

I have more volunteering at races on the calendar than I do races.

Next biggie is the Skyline to the Sea Marathon in October, but I’m sure I’ll have plenty of halves at 30Ks between now and then. 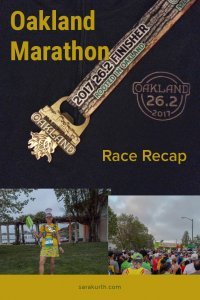