Generally speaking, the bigger the race, the less likely I am to set specific goals. I know that seems backward. It probably makes more sense to get super specific for ‘A’ races since they are the focus of the running year.

But I don’t want to set some arbitrary goal (simply for the sake of setting a goal) that could lead me to think less of the race or the training cycle if I fail to reach that arbitrary goal.

I’ve been training for this race for so long and the training went really (shockingly) well – whatever happens on race day is the icing on the cake.

My initial (glib) response is that my race goal is to survive. However, that implies there’s even the slightest chance of not finishing. This isn’t the case. I’ve trained. I’m prepared. I will finish.

I don’t have a time goal. I’m not even sure what to expect for time. My only other experience running an ultra was a course that was entirely downhill (finishing in 5:50), so not a great time estimator for this race that climbs around 5000 feet. As a stab in the dark time estimate, I’m thinking I’ll finish somewhere around 7 hours.

I’d briefly considered figuring out general paces to follow, but as I started planning it out – the first 12 miles are flat, some sections are downhill, then lots of uphill – it came out to be too much math.

In the end, I figure my goal is to run the way so many of my training long runs have gone – feeling equally strong throughout.

How does that relate to specific paces? Who knows and who cares.

It says something for my preparation that the night before the race these are my concerns:

The actual running of 31 miles? Not nervous about that at all (except: see #1) 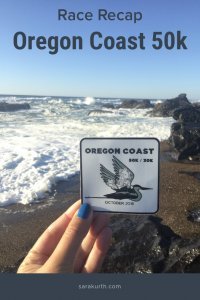 This race starts and ends in Yachats, Oregon. It is in the central coast of Oregon and is basically in the middle of nowhere (in the good, secluded sense).

To get there, I had 2 choices: fly to Portland and drive about 3 hours or drive from home (about 8 hours). Neither were great options, but beautiful race locations rarely are convenient.

I broke out the pro/con list factoring in time, cost, frustration (namely: how much I hate getting to the airport and getting through security), the baggage situation (namely: would all my GU fit into a carry-on? I didn’t want to have to check bags).

On the drive (it is a loooong drive) I got to thinking about it:

I really hesitated to drive somewhere when it would take me 7-8 hours to arrive.

I am driving to a race that will take me 7-8 hours to finish, and that I didn’t think twice about.

When I got to Yachats Friday night, the temperature was nice, but the wind was super strong and cold.

But on race day, wind was a non-issue. There was a light coastal breeze, but there was blue sky and 60s at the start.

We were bused to the start, ran south on the beach, past the finish area, into the hills, then back north to the finish.

Did you notice something there?

Ran south on the beach.

But no, the first 6 miles were on the beach.

I’m actually glad I didn’t know this. The reality is it was low tide, and the sand was super compacted. It felt like running on dirt.

But if I’d read we were running on sand, I would have imagined loose sand. Running in a sandbox kind of sand. I would have worried what it would do to my calves.

Sometimes a bit of ignorance is bliss.

After 6 miles on the beach, and a few more miles in town on a trail that paralleled the ocean, we moved inland. All 5000 feet of climbing occurred in the last 20 miles. This section was hilly, but was also super pretty – evergreen trees, moss, ferns, and views of the ocean below.

Spoiler alert – I totally nailed my goal of feeling strong throughout the race.

The beach portion went by in what felt like seconds – that whole section felt like an easy warm-up run.

As I always do, I power walked the uphill sections of the 20 mile hilly bit (I consider 20 miles ‘a bit’?). I actually feel like I could have run a lot more than I did. The wooded sections had tons of gnarly tree roots, and many sections of the woods were dark, making those roots hard to see.

I started to lose my confidence in my ability to not trip as the run went on. I knew I wasn’t picking up my feet as much as I should as I was fatiguing, but I also just got the fear of falling in my head.

Now, this is not an impossibility (Skyline To The Sea 2016 – I’m looking at you). But it became a way disproportionate fear in my head as the day wore on, which resulted in my walking more than I needed to.

So I finished with fuel still left in the tank.

Better than the alternative I suppose (especially since I didn’t have a goal time in mind), but it leaves room for improvement for next time (Next time? Am I already considering next time?)

The finish line is 20 yards from the beach. After I finished, I took my shoes off and waded into the ocean. 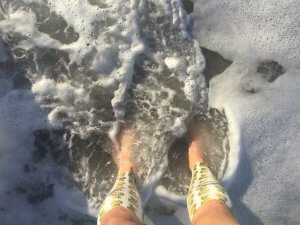 I’m not an ice bath girl, but the cold water felt so good on my abused little feet.

Are running skirts just a Bay Area or California thing?

I sure didn’t think so, but after this race I’m wondering. At Bay Area trail races (of any distance) a solid 80+% of girls are wearing running skirts. Heck, even the boys are getting into it – I’ve been seeing more ‘running kilts’ this year.

At Oregon Coast, I saw one other skirt wear.

In a field or 200ish runners, 2 running skirts?

The Oregon Coast 50k was a cup-free race. I knew this going in, and love it.

A major pet-peeve of mine is how many paper cups are used at races. Besides, I’m wearing a hydration pack so I’m not impacted by it either way.

I’ve never heard of the post-run beer tent being BYO cup before. That I wasn’t ready for.

I happened to have a 32 ounce Nalgene bottle in the car, so 30 ounces of beer it is – they were filling up whatever you had.

But don’t worry, I didn’t fill it all the way to the top, that would just be excessive.

As I mentioned, I felt strong the whole race. If anything, I was too conservative. Regardless, I’m very happy with the race I ran.

I guess I know myself and my running better than I think.

I had a few little hot spots on my feet as the day wore on, and some underarm chafing, but nothing too bad. I didn’t really even feel sore.

Even after hanging out at the finish, drinking my BYO Cup beer and eating my wood-fired pizza (it was all very Oregon), it wasn’t too tough standing up.

I sure expected worse.

This race didn’t have shirts or medals. They had shirts available for purchase, but nothing was included. I’m fine with this – I have (more than) enough of both and it keeps race prices down.

What they did have were race stickers.

I didn’t love that the race started at 9 AM.

Later starts are fine for shorter races, but for a 50k?

I was 4 by the time I finished. After stretching, food, and beer at the finish, it was after 5 when I left for the hotel.

I had barely enough time to shower before I wanted to head out to the hotel’s back patio to watch the sunset.

It’s a trek to get here, so it’s not going to be a regular thing, but if the opportunity arises I’ll be back.

I’d like to do more Rainshadow races too (they do many races throughout Oregon and the Pacific Northwest). It was a great race and well organized. I talked to other runners and many have done a lot of their races.

It’s a good sign when a race company has a dedicated fanbase.

I’m entering my running off-season, so I’ll be volunteering at a bunch of races. I need to refill my cache of free volunteering-credit race entries.

#flatsara is ready to rock the #oregoncoast50k tomorrow! Im so glad I packed a buff (rule #1- always pack a buff! ) while the temp is nice, the wind is strong and cold. But i think it will be at our backs for most of the run