This is the first of three race weekends in a row. First up, my fourth outing at the Bear Creek Trail Half Marathon. 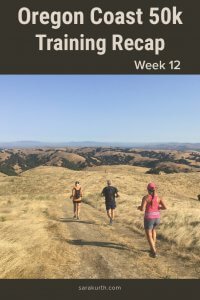 I liked it. This one had a lady demonstrating the moves while a guy narrated and gave body cues.

He talked pretty much straight through, which usually annoys me. However, everything he talked about was directly relevant to the move (and was useful) so it didn’t bother me as much as when it’s an instructor who never stops talking because they just like to hear themselves talk.

Another side trip into the community / botanical garden. How I wish i had a green thumb! I felt instatly calmer seeing this dahlia. #seenonmyrun

Another super speedy (for me) run this morning. What has gotten into me?

For one, it is a better diet. Last weekend, I went to a blogger meet up that was sponsored by Bob’s Red Mill. I got some Kamut – a type of ancient grain. I really liked it, so I made a batch to put in the fridge.

As a result, I’ve been eating a bunch of grain bowls with some of the other pre-made basics I have the freezer (beans, shredded beef).

It’s amazing what the body can do when you eat like a remotely healthy adult and am fully hydrated (thanks to my Hidrate Spark).

According to Strava, this was the fastest ive ever done this route. It also felt the easiest. Gotta love that combo! #somedaysthestarsjustalign

I got a last-minute invite to go to a casual meet-up tonight with the founder and CEO of Zensah (makers of compression gear) in Sacramento. It is a bit of a drive, but how many chances do you get to hang out with the CEO of a company whose products you like? Besides, I thought a change of scenery would do me good for the day.

So I had to decide: do I run first, then drive out, or make a day of it and run somewhere new between here and there?

Since I knew it would be super hot once I left the coast, I decided to run from home, come home, shower and then head out in the afternoon. It’s one thing to do a car shower when I’m going to a casual get-together with friends, but I think I should be a little more presentable to hang out with a CEO.

Plus, I wanted to get my run in early, since the smoke from the fires up north are starting head down here, and it seems to get worse in the afternoon. So I did my usual route to Jack London square. I felt amazing. Dare I say it felt easy!?

According to Strava, it’s the fastest I’ve ever done that route, and I believe it.

It was hot AF in Sacramento, so I’m glad I didn’t run out that way.

Had a great time hanging out with the CEO. I learned a lot about the company and the stuff they have planned, and got a pair of pop art sleeves (I do love me my swag).

I realize this is an overly broad statement, but i really don't understand art. This scrap metal bear looks cool and all, but why is it on a random street in Lafayette? #seenonmyrun #whatdoesthismean

The only word I can come up with for my run today is meh.

It wasn’t bad exactly, but it also was lacking anything that I’d call good.

It just kind was.

#flatsara is ready to face the bear tomorrow at the Bear Creek Trail Half! It is a bear of a course! We'll see if i need to add in a face mask at the last minute due to hazy/smokey conditions. #bebrazen #bearcreek #flatrunner #toesocksornosocks

Tomorrow is the first of three race weekends in a row and I’m doing Brazen’s Bear Creek Half.

This is a tough course, made worse since it is largely exposed and hot. I’m extra nervous this year because of the bad air quality due to the fires up north. My original goal was to try to get a course PR, but I think I may need to scrap that plan and take it easy to spare my lungs.

It was a beautiful morning to hit the trails! It was 'only' really hot (not super duper furnace of hell hot like it can be here), and the smoke and haze stayed away. I didn't fall on my face (like i did here in 2016), and felt strong. I kinda felt like i knew what i was doing with this whole running thing. #bearcreek #bebrazen

A full race recap will be posted on Tuesday, but to give the highlights:

I really like Bear Creek (held at Briones Regional Park). It’s a tough course, climbing around 3000 feet, but there are a few great views and a lot of variety on the scenery and types of trails we are on.

Thankfully, my fears were unfounded (as they so often are) – neither the temperatures nor smoke were an issue.

I felt surprisingly strong and I kept passing more and more people as the race went on. I love it when that happens.

I did end up setting a new course record (by about a minute), so yeah!

Foam rolled a bunch tonight. I do love my Trigger Point foam roller.

I wasn't in the mood to drive to a run this morning, so i combined a few shorter runs in the neighborhood and did a few random turns to get full distance in. Ended up passing the runners of the @oaktownhalf a few times, hit 2 farmers markets and Jack London Square. #seenonmyrun

Physically I felt fine, but mentally, I wasn’t having it at all.

I slept in later than I should, so by the time I finally got moving, I knew it would be super hot if I went too far afield to run. I didn’t want to drive anywhere to run, so I stuck close to home. Since I don’t have any go-to 10-mile routes from home, I cobbled together a few shorter routes. It was fine.

There was a big half marathon running around Oakland (The Oak Town Half), so I passed racers any number of times. It’s always fun to cheer on other runners.