My training plan for the Oregon Coast 50k is two-steps forward one step back (intentionally – one week I’m going longer/harder, then the next week is an easier step back week to prevent burnout and overtraining). This is my first step back week and as a result, this week is my lowest mileage week of the entire training cycle.

I tried to enjoy it and keep in mind the big picture, but I instead constantly fought the feeling that I wasn’t doing enough. 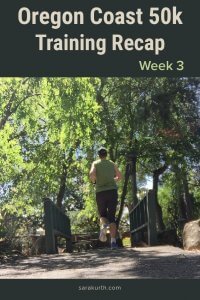 Started the week with the Nike Training Club (NTC) workout ‘Walk The Plank.’ NTC said the focus of this workout is mobility, and I believe it. No cardio, just lunges and a few twisty moves to get the joints moving.

I should have predicted it based on the name, but there was also quite a few planks. However, NTC is notoriously bad at naming workouts (see: ‘Crunch And Burn’ doesn’t have a single crunch), so it wasn’t as obvious as you may think.

Multi tasked on my run this morning stopping by my polling place on this CA primary election day. I try to be an informed voter. This election, with nearly 30 governor candidates was a bit much #ivoted

It’s all about perception.

Today was a warm summer day. If it hadn’t been for last weekend, I would have said: ‘it was SOOO hot! How ever could I run in this summer weather?’

My body thermometer has been off the last few days. It’s the same feeling I have the day of a marathon, I can be freezing and roasting at the same time (usually my face is roasting and my body is freezing). After my unintentional heat training over the weekend, my body is a little confused.

It’s super annoying. No matter how I dress, it’s wrong. I can’t get comfortable.

It’s also been impacting my sleep – I keep waking up either roasting or freezing. It doesn’t help that I haven’t figured out the right summer blanket combos yet.

Happy global running day! I haven't decided if ill attend one of the many local events in celebration tonight, but i still did my usual morning run regardless #globalrunningday #runwithsb

There were all kinds of events today, most of them tonight, but I decided just to do my usual morning run. If there was any doubt, the heat wave has passed and the wind is again strong and cold. Gotta love the Bay Area.

I felt like Snow White this morning on my run- the woodland creatures couldn't wait to be my friend! #canwebefriends #squirrelsofinstagram

What a difference a few days makes.

After my run, I stopped in a local garden to film a few YouTube segments. The second I stopped, this squirrel ran up to me.

I was torn – either it was adorable and I’ve just made a new friend or this squirrel has rabies (I vaguely remember reading that a rabies symptom in animals is a lack of fear of humans), and it’s going to scratch me and I’ll die.

After my run, I did the NTC workout, ‘Body Flexor 2.0.’ It was a good workout, almost every move was done/held for 1 minute, so I didn’t feel like there was much to it. For the most part, I don’t mind doing a move for 1 minute, but it can be a bit tough for core moves and push-ups.

For me, 1 minute of push-ups goes on forever.

It was another three workout day, as I went to the Truve Community Flex And Stretch Class. Today’s class was very twisty with lots of spinal twists and bends.

Ran by the 'AirBeeNBee' bee hive/ colony thingy in the public garden this morning. #seenonmyrun #savethebees

Today was a wonderfully uneventful run.

I have many of these every training cycle. They are good for my running, not so much for re-capping.

They aren’t terribly exciting to read (or write) about.

‘Only’ the NTC workout ‘From The Ground Up’ today.

For the longest time, I’ve considered mountain climbers to be my nemesis and my least favorite exercise.

After the workout today, I may have to amend that. I hate split jumps.

After spending several minutes during the course of this workout doing split jumps, I think split jumps have overtaken mountain climbers. They are now my least favorite exercise.

Broke out my brand new #ebmud trail permit and ran a new trail route this morning circling the Briones Reservoir. Loved the trail, it has a little bit of everything (including ticks 🕷 remember to check yourself people!). #ebmudtrails #brionesreservoir #trailrunningviews

I tried a new route today- a loop of the Briones Reservoir. I loved it! I have a new 14-mile go-to route.

It’s on East Bay Municipal Utilities District (EBMUD) land, so you need to get a use permit. I was so excited to try this trail when I first read about it on Weekend Sherpa, I bought an annual pass (a whopping $10 investment), so this was the first outing of my brand new permit.

After last week’s short stint in parking lot jail I took specific note of the closing time of the parking lot (1/2 hour before sunset for the record). For what it’s worth I had plenty of time last week to read all of the signs at the gate of now infamous (in my mind anyway) China Camp parking lot – there was no posted closing time.

This course has a bit of everything. Parts are wooded, parts are open land, and it’s well marked! I love when I don’t have to break out the map running on a new course.

The animal tally from this run:

A perfect morning to run to the farmer's market. #howcaliforniaofme #roughlife

I considered doing another trail outing this morning, but my heart wasn’t in it, so I just went for a run in the neighborhood – running to Jack London Square.

When my runs from home get over about 6 miles I usually make my way to Jack London Square and the wolf statues reminded me (to my great shame) that I’ve never read Call Of The Wild.

Today’s NTC workout was ‘Sweat and Shape 2.0.’ My heart wasn’t in this either.

I did the first 15ish minutes, but I just couldn’t make myself see it through to the end so I bailed.

I did pretty well in my hydration goal this week. I pretty much always had my water bottle with me, though there is still room for improvement.